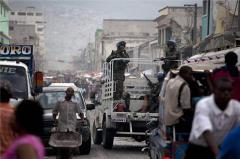 Almost everyone now accepts that the United Nations brought cholera to Haiti last month. The evidence is overwhelming and many experts (including the head of Harvard University's microbiology department, cholera specialist John Mekalanos) made up their minds to that effect several weeks ago.

The Haitian people overthrew slavery, uprooted dictators and foreign military rule, and elected a liberation theologian as president. The West has made them pay for their audacity.

An abbreviated version of this article first appeared as 'The Land that Wouldn't Lie' in the New Statesman, 28 January 2010.

Any large city in the world would have suffered extensive damage from an earthquake on the scale of the one that ravaged Haiti’s capital city on Tuesday afternoon, but it’s no accident that so much of Port-au-Prince now looks like a war zone. Much of the devastation wreaked by this latest and most calamitous disaster to befall Haiti is best understood as another thoroughly manmade outcome of a long and ugly historical sequence.

An account of the 2004 coup in Haiti, first published in New Left Review, issue of May-June 2004. The article is published here in attached pdf format.

Peter Hallward has offered the following response to Paul Knox’s recent review of Damming the Flood.

Thank you for taking the time to write a substantial review of Damming the Flood. I’ve asked the Canada Haiti Action Network to post this response to your review on their website, and invite you to reply in turn.

In comparison with some of the other responses it’s provoked, I appreciate your relatively even-handed treatment of the book and the controversial topics it addresses. I agree with much of the first half or so of your review. But as you might expect, I also have some objections and questions.

December 16, 2007. This article first appeared in the newspaper Haiti Liberté, in nine instalments, October-November 2007. Parts of this article draw on material published in the ninth chapter of Peter Hallward’s book, Damming the Flood(London/New York, Verso: 2007). This text deals with the February 2004 coup in Haiti in a substantially different and more detailed way.

A little less than four years ago, in late February 2004, France, the US and a few other old ‘friends of Haiti’ called on the country’s elected president Jean-Bertrand Aristide to resign.

Aristide and the Violence of Democracy

Review of Alex Dupuy’s ‘The Prophet and Power: Jean-Bertrand Aristide, the International Community and Haiti’

Every now and then something happens which helps to shed a little light on the way our newspapers distinguish between what counts as news and what doesn’t. Consider how the British press handled two very different disappearances, the nights of 3 and 4 May 2007.

In early May two British doctors, Kate and Gerry McCann, were on holiday in the Portuguese resort of Praia da Luz. The McCanns say that on the night of 3 May they went out to dinner at a tapas bar near their hotel, leaving their three-year old daughter Madeleine behind with their two other young children. At some point that evening, Madeleine was apparently abducted or otherwise removed from their unlocked apartment, and she hasn’t been seen since.

Interview by Peter Hallward, March 2007[i]

Guy Philippe was a commander in the Haitian National Police from 1995-2000, and in February 2004 he led an armed insurgency that helped to overthrow the government of Jean-Bertrand Aristide. Peter Hallward is a professor of philosophy at Middlesex University in the UK, and the author of a book on recent Haitian politics entitled Damming the Flood: Haiti, Aristide and the Politics of Containment(Verso, forthcoming in the autumn of 2007).