Americans arrested in Haiti driving around with an arsenal are flown to the U.S. 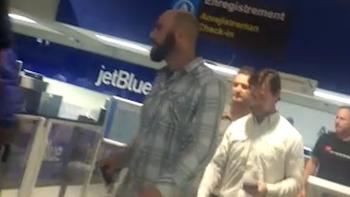 Five Americans were arrested on Feb. 17, 2019, in Haiti after police found them driving around heavily armed. They were flown back to the United States on Feb. 20.

A group of Americans arrested in Haiti driving around Port-au-Prince with an arsenal of weapons arrived back in the United States Wednesday night after failing to show up for their first court appearance before the Haitian justice system.

Upon their arrival in Miami aboard American Airlines flight 1059, U.S. law enforcement boarded the flight and handcuffed the men, according to a tweet from Haitian TV and radio personality Carel Pedre to his 223,600 followers at 8:25 p.m.

Three hours earlier, as the flight started to take off from Port-au-Prince, a police source told the Miami Herald: “They left.”

The group also included two Serbians, at least one of whom is a U.S. permanent resident, and a Haitian national who was deported from the U.S.