Asylum seekers have flooded into Canada. The government is putting them to work. 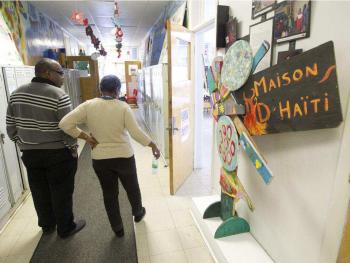 In a darkened room at a suburban community center last month, a representative from a Canadian meatpacking company showed a huge map on the screen. More than 30 Haitians who had recently walked across the border to file refugee claims in Canada were in the audience.

“This is Canada,” the woman said. “Here’s Quebec.” She was trying to recruit workers for her company’s pig farm, but first she needed to describe where it was.

She zoomed in: “This is Temiscamingue,” she said, explaining that it’s an eight-hour drive northwest of Montreal. Two men stood up and walked out.

Pay starts at $13.25 an hour and shifts start at 7 a.m., she said, and workers get housing and full benefits. People started to raise their hands.

By the end of the job fair, Olymel managers said they were thrilled: With 10 jobs to fill, at least a dozen people had stayed behind to ask questions.

Tens of thousands of people have surged across the border into Canada from the United States to claim asylum in the past year as the Trump administration’s policies on migrants caused worry among asylum seekers and anti-migrant sentiment rose. The flood of migrants has put pressure on Canada’s asylum system, accustomed to smaller numbers, and has driven up costs.

So Canadian policymakers are bolstering one tactic to ease the burden: They’re integrating refugee claimants as quickly as possible into the job market.

The deluge of “irregular” ­border-crossers into Quebec has been a boon for companies such as Olymel during a time of low unemployment. Olymel, for instance, has hired 250 asylum seekers at other sites.

“There was a big need, an urgent need, for employees,” said company spokesman Richard ­Vigneault. “They’re very much willing to work. We train them; they’re very fast. . . . We’re very satisfied.”

Many asylum seekers have also placed their hopes in work. With warnings that their claims will probably be rejected, many say they believe a good employment record will ultimately help them to stay.

“That’s why we’re here in Canada — so we have a job and a future,” said Jean Brize, 38, who attended the job fair. Originally from Haiti, he moved to Canada from New York City last year with his wife and daughters. “The government is also focused on people who work.”

Many of the migrants crossing into Canada know little about the distinctions between the Canadian and American asylum systems.

Those differences are stark, especially now. South of the border, claimants wait at least six months before they can legally work, and in recent months a “significant portion” have been kept in detention, according to Eleanor Acer, of the nonprofit organization Human Rights First.

In Canada, and particularly Quebec, asylum seekers get shelter, food, legal aid, basic health care, language classes and help finding an apartment, and they begin to receive welfare payments at the same rate as Canadian citizens. But they’re also given work permits and asked to support themselves as soon as possible, paying taxes at normal rates.

That approach has become a crucial safety valve for Canada as the number of refugee claimants has doubled over the past year. In one report, Canadian authorities estimated that resettling Syrian refugees cost $2,650 per person per year over six years. Other research has shown that spending is much higher in the first year. Asylum seekers in Canada wait an average of 19 months for a hearing, further driving up costs.

The federal response has partly been to try to put people to work. In the fall, the government decreased the wait time for work permits from three months to three weeks, quickly issuing 12,000 permits in Quebec. This spring, it created a “triage” system, busing people from the border to regions other than Montreal, including rural parts of Quebec, with dire labor needs.

The system will attempt to send some asylum seekers “to the regions of Quebec, including issuing work permits more quickly to meet manpower demands,” said Chantal Bouchard, a spokeswoman from Quebec’s Immigration Department.

Asylum seekers are doing fairly well in finding work. Of 13,072 adult asylum seekers who began receiving Quebec social assistance for the first time last year, 7,132, or about 55 percent, quit the program by the end of 2017, said a spokesman from the provincial labor ministry.

Some of those people probably quit for reasons other than finding a job, such as moving to another province. And that number doesn’t include anyone who began receiving welfare in the last months of 2017 — a big group, after the summertime deluge over the border — and who succeeded in finding work early this year.

Those who work with them say their employment rates are high.

“It’s not a difficult period for people to find a job,” said Francine Dupuis, who runs Montreal’s major governmental hub for refugee claimants.

Among the Haitian arrivals, “almost all” are now working, said Marjorie Villefranche, director of the Haitian community center that hosted Olymel’s job fair. Other meatpacking companies also have hired heavily, as well as a canoe and kayak manufacturer and a producer of herbs, spices and teas.

“The government has already spent a lot of money” on refugee claimants, said Éligene Perame, 52, a Haitian migrant who was also considering going to work at the rural pig farm. “But I have to make efforts to find work to help myself, mostly.”

Refugee acceptance rates have been falling swiftly, and this month federal ministers said they expect that 90 percent of the “irregular” border crosserswon’t meet refugee criteria.

It will also be crucial later for the minority of people who manage to appeal their rejections. Then they must show that their families are thriving in Canada and should stay on humanitarian grounds, Goldberg said — and employment is “very, very important.”

Given the current stress, some are even asking the government to take things a step further. Villefranche, whose community center helped resettle thousands of Haitian arrivals last year, has pitched the idea of allowing them to simply switch status to temporary migrant workers, an existing Canadian program, and then to apply for a permanent visa with the help of their employers.

“That would be much faster for them and less expensive for everyone,” she said. “And there is hope at the end.”

“The government would most likely be concerned that it would be a pull factor drawing more people to cross the border,” Goldberg said.

Brize, after filling out forms for the Temiscamingue job, said any option is a good option if it means staying in Canada.

“If the government gives us asylum status, that’s good,” he said. “If the government [says] it will welcome us by sending us to another position, to work, we have no problem. It’s residence status we’re looking for, because we do not want to live in our country.”