Attack on Parliament denounced as a diversion 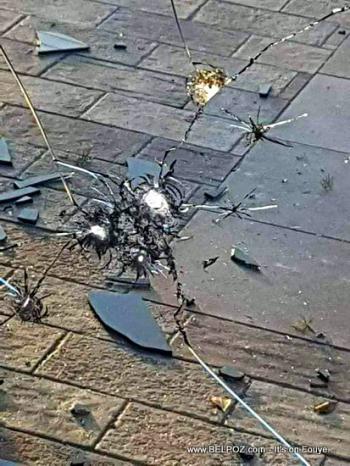 Bullet-holes in the glass door to the Chamber of Deputies from shots fired in the early morning hours of Aug. 20.

According to a Legislative Palace security guard, around 4:30 a.m. on Mon., Aug. 20, an explosion and gunfire occurred at the Haitian Parliament, leaving bullet-holes in a glass door and signs of a minor detonation.

Curiously, not one of the four surveillance cameras installed near the Parliament’s damaged door was working, so the authorities claim there is no record of what occurred.

The bullet-holes, found in the door to the Chamber of Deputies’ reception room, could not have been fired from the street. Sen. Willot Joseph of the ruling Haitian Bald-Headed Party (PHTK), who represents Haiti’s Center Department, claimed that the rounds had been fired from inside the Parliament and called the supposed attack “a piece of theater.”

An unidentified police source also told the HaitiLibre.com news website “unofficially” that the shots were fired from inside the building.

Apparently, a grenade also exploded outside the building but did not cause a great deal of damage.

Meanwhile, journalists covering the events were brutalized and their equipment damaged. Parliament security guards said they did not want the media filming their colleagues being taken away by the DCPJ for questioning. A guard assigned to the Senate struck Télé Pacifique’s Frantz Cinéus while another guard, assigned to the Chamber of Deputies, repeatedly struck Télé Guinen’s Bob Sleam Fontilus and even broke his camera.

The same security guards threatened other journalists with death if they broadcast video or photographs of them.

The Haitian National Police (PNH) have now reportedly taken over the Parliament’s security.

“I believe this so-called attack is just an attempt to create a diversion,” said Yves Pierre-Louis, a veteran journalist who heads Radio Télé Timoun. “One can speculate as to why. First, the population is angry with the Parliament over the PetroCaribe corruption scandal, its lack of control or legislation, its wasting of money, and other flagrant corruption and dereliction of duty. This attack makes them look like a victim and gives an excuse for more repression.”

Pierre-Louis also noted that the government fiscal year closes at the end of September and the budget is not yet completed. “Corrupt legislators may use this attack to justify the allocation of money for supposed repairs, funds that might go right into their pockets,” he said.