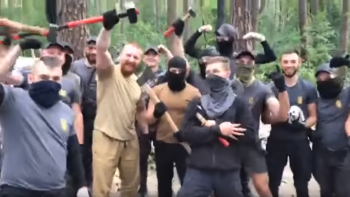 Bucking the trend of near total silence in the western media as Ukraine's government drifts further and further towards the far right, The Guardian published an article Monday detailing attacks by Ukrainian fascist militias against the Roma that have been met with little to no response from the authorities.

This has led to a situation where:

the European Roma Rights Centre (ERRC) is suing the national police for failing to investigate the attacks properly, and for negligence in protecting the Romani citizens from ethnic violence. Along with the National Roma Centre, they will allege failings under the European convention on human rights.
They claim there is growing evidence of collusion between the national police and far-right militias. Activists allege that, after the attack in Ternopil, a Romani woman said: “I don’t trust the police. The next day I saw the police officer drinking coffee with one of the guys who attacked our camp.”

This comes on the heels of news that the Ukrainian army has adopted the slogan "Glory to Ukraine! Glory to the heroes!", which originated with nationalist groups who collaborated with the Nazis during WWII.

It has been so sufficiently clear that the army has been both collaborating with and enabling the militias that even the Washington Post reported on it last year in the article: Ukraine turns a blind eye to ultrarightist militia.

It is also worth noting, again, that Nazi collaborators are now being re-framed as heroes with statues of them being erected in Ukrainian cities:

In spite of all this, Global Affairs Canada has green-lit the sale of the powerful LRT-3 .50 calibre sniper rifle to Ukraine’s military by Winnipeg-based PGW Defence Technologies. The odds that some of these will not end up in the hands of the militias is very low.

We cannot anticipate any serious reevaluation of these types of reckless and dangerous actions and arm sales as long as Chrystia Freeland -- who has made her sympathies with the Ukrainian nationalist cause abundantly clear --  remains Canada's Foreign Affairs minister. Given the subservience of the Liberals (along with the NDP and, of course, the Conservatives) to imperialist narratives such a reevaluation would be highly unlikely even with her departure.

It is likely just a matter of time before the racist, fascist militias of Ukraine are sporting Canadian made arms as they head out to commit new pogroms.