Canada on track for record arms sales to Saudi Arabia 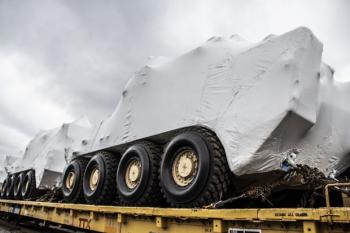 At least 16 LAVs have been spotted heading by rail toward the New Brunswick port since July. Joseph Tunney

Statistics Canada latest trade data releases show that Canada is heading toward a record year in rifle and ammunition exports to Saudi Arabia, despite the kingdom’s continued war in Yemen.

According to the latest numbers as of October of 2018, Canada has exported 21,101 rifles to Saudi Arabia, just behind the 2017 total of 21,778, and ahead of the 2016 total of 19,804. Should November or December repeat the numbers exported in the preceding two months – 4,000 each month – Canada will set a new record in its rifles and ammunitions exports to Saudi Arabia.

This would make the years of 2018, 2017 and 2016 the highest recorded years of rifle and ammunition sales to Saudi Arabia since the data was first tracked in 1989 – years that directly coincide with the beginning of the Saudi-led coalition intervention and subsequent war in Yemen.

Facing one of the world’s worst humanitarian crises, 22.2 million people in Yemen are estimated to be facing widespread famine and starvation, with 8.4 million in severe need. A recent international report cites the on-going armed conflict as the primary driver of the humanitarian disaster. The conflict has left more than 2 million people displaced and resulted in 17,000 direct civilian casualties of the fighting. One study estimates that around 85,000 children have starved to death since the conflict began.

As the worldwide chorus of opposition to the war in Yemen grows, the Trudeau administration continues to hold the line that its ministers are pushing for a ceasefire in Yemen and that Canadian arms are not being used in the war. In an exchange in the House of Commons in late November, Pamela Goldsmith-Jones, parliamentary secretary to the minister of Foreign Affairs, stated: “We require and expect that Canadian arms exports are used in a way that fully respects human rights. If there is evidence that Canadians arms are being misused or have been diverted, we will suspend those export permits as we have done in the past.”

Anthony Fenton, a researcher at York University, believes evidence shows that this is not the case.

“So far, what I and others have seen confirmation of in Yemen are three different varieties of the Winnipeg, Manitoba-made sniper rifles produced by PGW Defence Technology Inc. There have been a multitude of sightings of PGW rifles either in Saudi possession in/around Yemen, and/or in the possession of Yemeni rebels who have commandeered them as 'trophies' from Saudi soldiers,” Fenton said.

Global Affairs Canada holds the position that any evidence of Canadian-made rifles being used in Yemen would result in a suspension of export permits to Saudi Arabia.

"Canada remains deeply concerned by the ongoing conflict in Yemen and its humanitarian impact on civilians, particularly women and children, who continue to bear the brunt of the fighting," said John Babcock, a spokesperson for Global Affairs Canada. "We require and expect that Canadian arms exports are used in a way that fully respects human rights. That's why our government is committed to a stronger and more rigorous arms export system and to the Arms Trade Treaty. Canada does not export items destined for Yemen or that will be used in Yemen due to the impact on regional stability and security. Careful attention is paid to the potential for the diversion of Canadian exports to the conflict in Yemen. If there is evidence that Canadian arms are being misused or have been diverted, Minister Freeland will suspend those export permits while an investigation proceeds, as she has done in the past."

However, a recent report by The Guardian showed that there was a widespread lack of transparency with export permits that allowed U.S. and U.K. weapons to end up in the hands of soldiers in Yemen.

In 2016, an image surfaced showing a Houthi rebel holding a Canadian-made PGW rifle. Global Affairs Canada launched an investigation following that revelation. To date, that investigation has never been made public.

Canada is not the only country that has faced criticism over arms exports to Saudi Arabia during the conflict. Denmark, Austria, Holland, Spain and Germany have all heeded calls to stop exporting arms and have since ceased issuing export permits. Last week, the U.S. Senate voted to end American assistance to Saudi Arabia in the war as well.

The Trudeau government has yet to cancel Canadian arms exports even amidst the controversial LAV deal which saw Canada on track to export $15-billion worth of light armoured vehicles to Saudi Arabia. This year’s numbers will make Saudi Arabia the second largest importer of Canadian-made rifles behind the United States.

Ryan Donnelly is a freelance writer from Southern Ontario with an academic background in Canadian public policy. He's also a former human rights worker and adovcate who has written on issues of Canadian foreign policy.

One of the cargo ships charged with delivering another load of Canadian armoured vehicles to Saudi Arabia is due this weekend in Saint John, where the combat machines have been warehoused for months, even as Prime Minister Justin Trudeau seeks a way to stop Canada’s arms deal with the Mideast kingdom.

The Saudi-flagged cargo ship Bahri Yanbu will be greeted by protesters trying to prevent the shipment of these vehicles, which have been used in Riyadh’s war in Yemen. Demonstrators organized by the activist group PEACE-NB and individuals from the Council of Canadians will be protesting on Saturday morning near an entrance to the port and lobbying longshoreman to refuse to move the cargo.

“We’re hoping to spread awareness ... locally, with the people working on the ground that are probably unwittingly helping Saudi Arabia get these armoured vehicles,” Sharon Murphy-Mayne, one of the protesters, said.

“The best-case scenario would be that the light armoured vehicles are stopped in Saint John and aren’t exported overseas.”

At least 16 LAVs have been spotted heading by rail toward the New Brunswick port since July. Prior to that, the vehicles were shipped through Halifax’s port. The last train shipment was in mid-September. This week, LAVs could be seen in storage at a port warehouse, awaiting pickup by a Saudi cargo vessel.

Protesters say they hope the local branch of the International Longshoremen’s Association, a union with a history of refusing to move what it deems “hot cargo” – or goods intended for immoral purposes – will thwart the latest shipment.

Pat Riley, a spokesman for ILA Branch 273, declined to comment when contacted about what the longshoremen would do if confronted by protesters.

This local union was honoured by Argentina for its 1979 refusal to ship heavy water for a nuclear reactor to the South American country after a military coup. Back then, protests in the city were organized by the Saint John and District Labour Council, which was working in collaboration with the Group for the Defence of Civil Rights in Argentina.

“That’s what has to be present for there to be a hot cargo response,” retired University of New Brunswick professor David Frank, a labour history specialist, said. “When you’re talking about hot cargo, you’re always talking about how someone has appealed to you not to move this cargo.”

Again, in 2003 during the Iraq War, Saint John longshoremen declined to move military equipment destined for the Middle East.

Saudi Arabia has come under growing international censure after the murder of dissident journalist Jamal Khashoggi at the Saudi consulate in Istanbul and amid mounting concern over the ruinous war it’s spearheading in neighbouring Yemen. Last week, the U.S. Senate officially blamed Mr. Khashoggi’s murder on Saudi Crown Prince Mohammed bin Salman, the kingdom’s de facto ruler, and voted to withdraw military aid for the Saudi-led war in Yemen.

The last available United Nations figure for the civilian death toll in the war dates back to 2016 and stood at more than 10,000. The Armed Conflict Location & Event Data Project, which tracks violence in Yemen, now puts it at around 57,000 people. The UN has called it the world’s worst humanitarian crisis.

“There’s no secret of what is going on in Yemen. It’s an abomination,” Ms. Murphy-Mayne said.

Last week, Mr. Trudeau announced he wants to find a way to end shipments of armoured vehicles to Saudi Arabia – part of a deal valued at as much as $15-billion. The 14-year deal was signed in 2014 under then-Prime Minister Stephen Harper, but it was the Liberal government in 2016 that approved the exports to the Saudis under Canada’s arms-export control program.

“We are engaged with the export permits to try and see if there is a way of no longer exporting these vehicles to Saudi Arabia,” Mr. Trudeau told CTV’s Question Period on Dec. 16.

Saudi-Canadian relations were already severely strained before Mr. Khashoggi, a fierce critic of the Crown Prince, was killed on Oct. 2, because Canada had publicly urged Riyadh in July to release jailed civil-rights activists immediately.

In August, the Saudis expelled the Canadian ambassador and froze new trade and investment dealings with Canada in retaliation for what it called “blatant interference” in its domestic affairs. It suspended Saudi Arabian Airline flights to and from Toronto and began to withdraw thousands of Saudi students from universities, colleges and other schools in Canada.

According to the schedule of shipping line Bahri, its next stop in Saint John, after this weekend, is Jan. 29, 2019.

With a report from Reuters

Joseph Tunney is a freelance writer.