Canada's role in the austerity and uprising in Chile 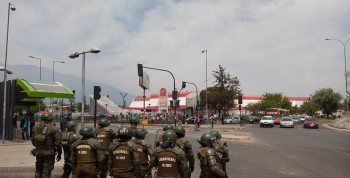 Protests began in Chile on October 18 after the government announced that it would increase the fare to ride the subway system in the capital city of Santiago.

"For minimum wage workers, the cost of using public transportation can already range from 15 to 20 per cent of wages," Foreign Policy explains.

"Protests have also centred on a lack of access to quality health care and education and inadequacies in the pension system, compounded by a rising cost of living. Protesters have also taken up issues including the rising cost of electricity and the price of Chile's privatized water."

The roots of austerity

While it is more commonly remembered that former prime minister Pierre Trudeau allowed 7,000 political refugees from Chile to enter Canada, Yves Engler has outlined how the Trudeau government withheld support for president Salvador Allende and backed general Augusto Pinochet, who overthrew the democratically elected Allende in a coup.

"Canadian economic relations, in the form of bank loans, investments and government-supported financial assistance have helped consolidate the Chilean dictatorship and, by granting it a mantle of respectability and financial endorsation, have encouraged its continued violation of human rights."

In The Guardian, Daniel Gallagher has highlighted:

"The process of water privatization in Chile which began in 1981 under general Pinochet established a model for water management that strengthened private water rights, adopted a market-based allocation system and reduced state oversight."

"The Ontario Teachers' Pension Plan (OTPP) is currently the largest investor in Chile's water and sanitation, holding majority shares in three large Chilean water utilities -- Essbio, Esval and Aguas del Valle -- and with 41 per cent of the sector under its control."

There are also the tools of state repression to consider.

"Chilean authorities should investigate and hold accountable both demonstrators who committed serious crimes and acts of violence as well as members of security forces who responded with excessive force."

"Images circulated by credible sources show members of the military beating protesters already under arrest and a man who appeared to be just standing on the street, as well as a man being thrown out of the back of an official van while it was moving."

As we see these images of repression, we should refer to the federal governments Report on Exports of Military Goods from Canada -- 2018.

That document tells us that the "export value of military goods and technology" from Canada to Chile totalled $4,415,547 last year.

And when we look at the 2017 report, we see that an additional $3,068,609 in military hardware was exported from Canada to Chile in that year.

There have been rallies in this country in solidarity with the people of Chile. That's important and hopefully those will continue.

There may also be a new opportunity at the foreign affairs parliamentary committee -- where the Liberals no longer hold the majority of seats -- to raise questions about Canada's role in Chile and the "modernized" Canada-Chile free trade agreement.

And more immediately, there will be the APEC CEO Summit held in Chile from November 14 to 16, the economic leaders' meeting from November 16 to 17, and the United Nations COP25 climate talks that are scheduled to start there on December 2.

How will the world react at those international gatherings?

Brent Patterson is a political activist and writer.