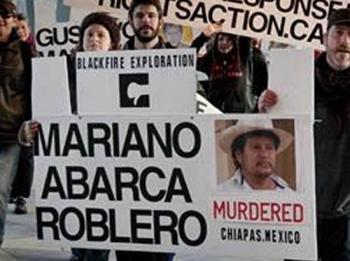 What are the responsibilities of diplomatic staff when they know an environmental activist is in danger overseas?

That’s what a judicial review in Canada is trying to determine in its investigation into the death of environmental activist Mariano Abarca, who was shot and killed Nov. 27, 2009, outside a restaurant in Chicomuselo, Chiapas, in southern Mexico.

Abarca was a vocal opponent of the Payback mine outside the mountain community of Chicomuselo in the Mexican state of Chiapas, where the now-defunct Blackfire Exploration Ltd. mined for barite, a mineral used in oil and gas drilling. He criticized the mine’s environmental effects and led a regional network of communities affected by mines.

Lawyers representing several Mexican and Canadian environmental and human rights organizations, as well as Abarca’s family, filed a notice of application in Federal Court May 16 that seeks to overturn the findings of a government office that said Canadian embassy officials in Mexico City did nothing wrong in the months leading up to Abarca’s murder.

Those appellants in the judicial review claim diplomats in Mexico City should have acted with greater urgency because several federal government policies warranted strong action if they knew an activist’s life was in danger.

“They really dropped the ball in terms of not really looking into the endangerment factor,” Yavar Hameed, Ottawa lawyer for the appellants, said in an interview with Bloomberg Environment.

Canada has had a corporate social responsibility policy for energy and mining companies in place since 2009 to manage conflicts between projects and communities overseas.

In December 2016, Global Affairs Canada, the department that manages Canada’s diplomatic and consular relations, released a set of guidelines for protecting what it calls “human rights defenders” in other countries. They specifically refer to situations where an environmental activist is in danger after confronting a Canadian mining operation.

Blackfire was dissolved in August 2017, according to Alberta’s corporate registry. It was owned by Brent Willis and Bradley Willis of Calgary, and Emiliano Avila de Merida, Yucatan, at the time of its dissolution, according to records that were provided by judicial review appellant MiningWatch Canada.

According to Mexico’s Ministry of Environment, the Blackfire mine was closed for environmental infractions that included polluting, releasing toxic emissions, interfering with the flow of water resources, and changing the use of land without permission.

The Public Service Integrity Commissioner, which overseas allegations of wrongdoing by federal officials in Canada, erred earlier this year when it decided the embassy didn’t breach government policy and that the policies referred to aren’t official, Abarca’s family and supporters said.

They said the Canadian embassy spoke to Blackfire more than 30 times between 2007 and 2010, indicating undue support for the mine, and the embassy received more than 1,400 emails in August 2009 over concern for Abarca, who was detained at the time without charges based on complaints that supporters said came from the company.

An email from the Canadian embassy to Bloomberg Environment said its spokesperson was out of the office and unavailable to comment.

But the fact that the embassy sought information from Mexican officials during Abarca’s detention, and that they welcomed a judicial investigation in Mexico after he was killed, indicate it wasn’t ignoring human rights concerns, Commissioner Joe Friday said April 5 in his response to the appellants’ request for an investigation from his office.

Further, the policies that the appellants referred to “are not official Government of Canada policies, and they do not appear to prescribe specific actions that should have been taken or not taken by the Embassy at the relevant time,” Friday said.

But in their judicial review notice, Abarca’s supporters said there was anecdotal evidence of a predecessor policy that requires embassy staff to pay greater heed to the human rights defenders guidelines and threats against Abaraca and that it was in place at the time of his death, according to Hameed.

Friday interpreted his responsibilities too narrowly and should have investigated that policy more thoroughly, he said.

Global Affairs Canada, when asked whether the department agreed with Friday’s views, said the commissioner’s office is “entirely independent” from government.

Canada has been widely promoting its human rights defenders guidelines with the intention of showing that they include expectations for diplomatic staff, Amnesty International Canada Secretary General Alex Neve said in an interview with Bloomberg Environment.

“We certainly don’t want to see any development that downplays these guidelines or suggests in any way they are just a piece of paper and at the end of the day don’t have to be taken seriously,” Neve said.

A hearing for the judicial review isn’t expected until later this year or in 2019, Hameed said.

The Office of the Public Sector Integrity Commissioner is ready to participate in the review as required by the courts if the matter moves forward, office spokeswoman Edith Lachapelle said.