Canadian imperialism in Haiti in the spotlight 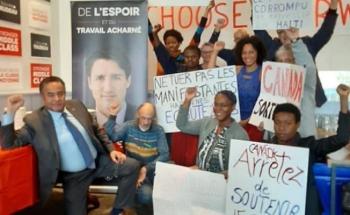 Sustained committed activism is unraveling the dominant media’s shameful blackout of Canadian imperialism in Haiti. But, the bias against putting Canadian policy in a negative light is such that small breakthroughs require tremendous effort.

On Monday 15 Haitian community members and allies occupied Justin Trudeau’s election office for a little over three hours. The Solidarité Québec-Haiti #Petrochallenge 2019 activists called on the PM to withdraw Canada’s backing of a repressive, corrupt and illegitimate president of Haiti. Trudeau’s government has provided financial, policing and diplomatic support to Jovenel Moïse whose presidency is dependent on Washington, Ottawa and other members of the Core Group.

The office occupation took place in solidarity with mobilizations in Haiti and elsewhere against Moïse and an apartheid-like class/race system enforced by Washington, Paris and Ottawa. In recent days massive protests in Haiti have demanded Moïse go. Last week protesters shuttered the Port-au-Prince airport, stopping Moïse from speaking at the UN and forming a new government. Over the past year, there have been multiple general strikes and massive protests demanding the corrupt president leave.

To convince us to end the sit in, the Liberals dispatched a backroom operator of Haitian descent. Chief of staff to Minister of Families, Children, and Social Development, Marjorie Michel offered to have the government make a declaration on the subject within 24 hours if we left the office (the Montréal police and RCMP came to Trudeau’s office just after Michel to highlight what would happen if we didn’t leave). Midday Tuesday Foreign Minister Chrystia Freeland tweeted a vague statement about the situation in Haiti, which at least didn’t endorse Moïse (unlike some previous statements).

Michel was clearly disturbed that Trudeau was asked “are you aware that your campaign office in Montreal is now occupied by Haiti solidarity activists and what would you say to those who ask why you back the undemocratic regime of Jovenel Moïse” at a concurrent press conference in Toronto. Global TV broadcast a somewhat perplexed PM responding to activist/journalist Barry Weisleder’s question about the hypocritical nature of Canadian policy in the Americas. Trudeau ignored the Haiti part of the question and criticized the Venezuelan government.

As a follow-up to the occupation of his office, we organized a last-minute 10-person rally on Wednesday outside a community boxing ring where Trudeau put on his gloves for a photo-op. We chanted loudly “Jovenel repressif, Trudeau complice”. The PM’s large RCMP detail called the Montréal police, which dispatched a dozen officers who arrested organizer Marie Dimanche. In one of the weirder rally/media situations I’ve seen, the police organized a protected pathway for the media inside the gym following Trudeau to get back on the election campaign bus. It was as if we were a threat to members of the media and it effectively blocked them from interviewing us.

Unlike previous Solidarité Québec-Haiti actions, the dominant media didn’t (almost completely) ignore our office occupation and follow-up rally. The Montréal Gazette published a good article on the sit in, which was picked up by a half dozen outlets. Part of it was translated into French and published by La Presse. Journal Métro, Ricochet and Telesur all ran their own articles on the office occupation. A few days later Le Devoir published a good article promoting our demand titled “Le Canada appelé à lâcher le président haïtien Jovenel Moïse.” A slew of Haitian news sites and community radio programs covered the occupation. As with previous Solidarité Québec-Haiti actions, they both received substantial attention on social media.

On August 18 a member of Solidarité Québec-Haiti interrupted Trudeau at a press conference to ask why Canada supported a corrupt, repressive and illegitimate president in Haiti. Since July 15 members of the Haiti solidarity group have interrupted two press conferences (and a barbecue) by Minister of La Francophonie and Tourism Mélanie Joly to call on the Liberals to stop propping up Moïse. Solidarité Québec-Haiti has also directly questioned Liberal MP Emmanuel Dubourg, Minister Jean-Yves Duclos and former International Development Minister Marie-Claude Bibeau over the government’s policy in Haiti. But, even when media outlets were at these events, they mostly ignored our interventions.

From the Liberal’s perspective media silence is vital. Unlike the 2004 Liberal backed coup, which included significant demonization of Jean Bertrand-Aristide by the Haitian and Haitian-Canadian intellectual elite, few among Montréal’s Haitian establishment seem keen on defending Moïse. So, the Liberals have to justify their support for Moïse.

Through bold activism Solidarité Québec-Haiti has forced the dominant media to cover Canadian imperialism in Haiti. But, a great deal more work will be needed to force a shift in government policy.