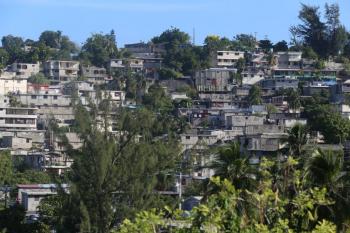 Protesters recently threw a Molotov cocktail and burnt tires in front of the Canadian Embassy in Port-au-Prince.  At another rally demonstrators hurled rocks at the embassy and a protester was filmed holding a sign saying: “Fuck USA. Merde la France. Fuck Canada.”

While jarring for most Canadians, these acts reflect the anger of an impoverished people fed up with foreign governments dictating their affairs.

For more than a year Haitians have been engaged in a remarkable popular uprising against a corrupt and repressive foreign-backed president. Since September schools and businesses in Port-au-Prince have for the most part  been shut due to protests challenging the president, racism and economic inequality. However, Haitians are also rejecting Canadian foreign policy.

Jovenel Moïse remains president because he has the backing of Canada, France, the United States and other members of the so-called “Core Group.”  Canada provides the unpopular president with important  financial, policing and diplomatic support.

During the past decade and a half, Haitians have increasingly identified Canada with the country’s historic influencers. Michel Vastel, a prominent Québec journalist, reported that a secret meeting took place on Jan. 31, 2003 in Ottawa, where officials discussed Haiti’s future. No Haitian representative was invited to the summit where high level officials from the U.S., Canada, France and the Organization of American States discussed overthrowing elected president Jean-Bertrand Aristide, putting the country under international trusteeship and resurrecting Haiti’s dreaded military.

Thirteen months after that meeting, the U.S., France and Canada ousted Aristide. For the next two years they imposed a government responsible for thousands of deaths. The coup also ushered in a UN military force whose reckless sewage disposal caused a cholera epidemic that took 10,000 lives.

After the country was struck by a deadly earthquake in 2010, Canadian officials continued their inhumane and antidemocratic course. According to internal government documents the Canadian Press examined a year after the disaster, officials in Ottawa feared a post-earthquake power vacuum could lead to a “popular uprising.” One briefing note marked “secret” explained: “Political fragility has increased, the risks of a popular uprising, and has fed the rumour that ex-president Jean-Bertrand Aristide, currently in exile in South Africa, wants to organize a return to power.” The documents also explained the importance of strengthening the Haitian authorities’ ability “to contain the risks of a popular uprising.” To police Haiti’s traumatized and suffering population 2,050 Canadian troops were deployed alongside 12,000 US soldiers and 1,500 UN troops (8,000 UN soldiers were already there).

A year after the earthquake the U.S. and Canada forced third place presidential candidate, Michel Martelly, into the runoff of an election that barred Aristide’s party. The central figure in the multi-billion dollar corruption scandal that has spurred recent protests, Martelly is Moïse’s mentor.

It’s no wonder Haitians are angry with the Canadian government. But, an alternative Canadian position is also being put forward. On Oct. 31, Québec’s National Assembly unanimously endorsed a motion declaring “our unreserved solidarity with the Haitian people and their desire to find a stable and secure society. ” It urges “support for any peaceful and democratic exit from the crisis coming from Haitian civil society actors.” A week earlier the Concertation pour Haïti, a collection of Québec NGOs and unions, called for “Canada to make the right choice and use its influence in the international community to support” a presidential transition.Last week David Suzuki, Amir Khadir, Roger Waters, Maude Barlow, Yann Martel and more than 100 other writers, musicians, activists and professors signed an open letter requesting that  “the Canadian government stop backing a corrupt, repressive and illegitimate Haitian president.”