Covid-19 in Haiti: The worst appears not to have happened, but dangers still hover 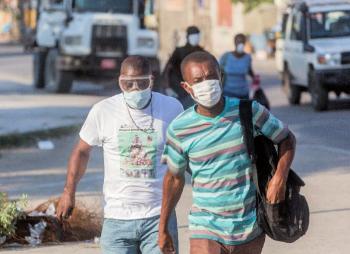 Haitians wearing masks on a Port-au-Prince street in late March 2020. Haiti is now starting to reopen, but could this lead to a spike in Covid-19 infections and deaths?

As of Jul. 14, almost four months after Haiti went into lockdown, there have been only 6,727 recorded cases of the novel coronavirus in Haiti, with only 141 dead. That is a lot less than the 46,305 cases in the neighboring Dominican Republic, which has seen 910 Covid-19 fatalities. It’s also a lot less than many experts had predicted.

Haiti currently has only 178 people hospitalized for the virus, so its fragile hospital system has not been overwhelmed, as many had feared.

With its first case recorded on Mar. 19, the daily number of new cases peaked at 332 on Jun. 6 but has gone steadily down to now under 100 (only 37 on Jul. 12). Meanwhile, the daily cases in the DR is still rising, now at over 1,400. (Figures according to the John Hopkins University Coronavirus Resource Center.)

The French NGO Doctors Without Borders/Médecins Sans Frontières (MSF), among others, has questioned whether widespread fear and distrust of medical clinics and hospitals is suppressing the number of people being tested, treated, and tallied for Covid-19.

“One of the most widespread rumors is that a fatal injection is administered in hospitals to increase the number of deaths linked to the epidemic, in order to receive more international aid,” wrote MSF’s Nathalie Destiné Charles and Julie Rolinet on Jul. 6 from Port-au-Prince, which has 74% of the Covid-19 cases and about half of the deaths. “Another is that health facilities are testing a vaccine for the coronavirus on people without their knowledge.”

To counter such misconceptions, MSF has “adapted our methods and encouraged training and awareness-raising in small groups,” because they can’t organize large meetings, Charles and Rolinet write. “For training on COVID-19, we targeted certain key groups such as community liaisons, school directors and neighborhood associations. We have already trained more than 120 people, which is the basis of our community engagement… We have also strengthened our door-to-door activities to make residents aware of the existence of the disease, the preventive measures to adopt, and the need to go for treatment before it is too late.”

Meanwhile, Cuban doctors, who have maintained a mission in Haiti for almost 22 years, are generally well-loved and trusted by Haitians. Twenty doctors of the Henry Reeve International Brigade work in the main Covid treatment center on the Delmas Road in the capital, handling Haiti’s “most complex cases of the disease,” according to Prensa Latina. Focusing on underlying conditions like “hypertension and diabetes, ailments suffered by some 2,350,000 Haitians,” the team has obtained “good results so far,” according to Elizabeth Segura, the brigade’s vice coordinator. (Cuba’s biotech industry has also developed a medicine that has proven very effective in treating Covid-19: Interferon Alfa-2B.)

The disease may be more prevalent than statistics indicate. An anonymous source in a health NGO (working with Haitian Health Ministry partners and under its aegis) has run 500 tests over the past six weeks at clinics around the capital and has found that the positive rate has gone from a bi-weekly average of 5% to 25% to, most recently, 45%. These were random tests on blood samples of people coming to the clinics, not necessarily for Covid-19 symptoms. Although a quite limited sampling, “it’s a good indicator of what’s going on among the general population,” the source said.

Whether it’s distrust of Western medicine, reliance on traditional remedies, fear of being stigmatized and aggressed, or mild symptoms in a mostly young population (over 50% of Haitians are under age 23), no crowds have mobbed Covid-19 clinics around Haiti. They remain largely empty.

But one statistic that can’t lie is the death rate, and it has not spiked in Haiti. Nor has the demand for ventilators (even the Pope donated four to Haiti).

“The virus is having no impact on mortality or even severe respiratory complications,” our source said.

Nonetheless, the saga is far from over.

On Jun. 30, Haitian President Jovenel Moïse and his Prime Minister Joseph Jouthe reopened Haiti’s airports and borders, potentially inviting an influx of expatriates from Covid hotspots like south Florida and New York, where most of the diaspora resides. Last week, major U.S. airlines serving Haiti – American, JetBlue, and Spirit – resumed flights to Port-au-Prince (but not to Cap Haïtien).

Add to that thousands of Haitians fleeing from the hard-hit Dominican Republic, where they once poured in looking for work.

Helen La Lime, who heads the United Nations Integrated Office in Haiti (BINUH), appears to have gotten it exactly backwards when she addressed the Security Council on Jun. 19. “A primarily domestic problem [in Haiti] could transform into a regional issue should an already alarming humanitarian situation continue to worsen and increasing numbers of Haitians be tempted to seek better fortunes abroad,” she said.

Instead, it appears that Covid-19 might be imported into Haiti rather than exported out.

Also last week, the government lifted the restriction on Haiti’s assembly industries, which are mostly densely packed sweat-shops making clothing and electronics (some had been converted to making masks). When Haiti shut its borders in late March, the plants had at first been closed, then allowed to reopen at 30% capacity a month later. They are now cleared to function at 100%.

Those plants produce the cheap-labor-enhanced commodities that the U.S. economy can’t live without. The Trump administration is surely happy to see them “getting back to work.”

But the specter of Covid-19 still hangs over Haiti. Will an influx of Haitians from abroad and complacence as factories and slums repopulate become vectors for the disease’s resurgence in Haiti, as has been seen in many countries which underestimated Covid-19’s lethal potential?