Disasters caused by hurricanes and climate change are a systemic problem 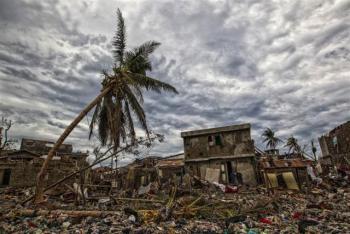 Hurricane Matthew struck Haiti on Oct. 4, 2016, destroying 80-100% of agricultural crops and 50% of livestock. According to the Haitian government, close to 400 people died.

As we go to press this week, Category 5 Hurricane Irma, with record breaking winds of 185 mph, is bearing down on Haiti and other Caribbean nations. Meanwhile, a magnitude 4.3 earthquake struck Haiti’s Central Plateau on Sep. 2, damaging a school and six homes. One person was injured in the relatively minor temblor.

In the past decade, Haiti has been struck by multiple natural disasters, including four storms in one month in 2008, the January 2010 earthquake, and last October’s Hurricane Matthew. All resulted in terrible death and destruction. But there is nothing “natural” about these catastrophes. People died because Haiti’s local and overseas ruling classes, and the government officials they help put in office, have other priorities and care nothing for people’s lives and welfare.

Haiti’s neighbor to the west proves the point. Cuba is hit almost every year by powerful hurricanes and yet suffers very few casualties. In fact, “a person is 15 times as likely to be killed by a hurricane in the United States as in Cuba,” according to the Center for International Policy, a Washington think-tank. This is because the Cuban government prepares buildings, trees, and infrastructure for storms, trains its citizens and a Civil Defense Force in evacuations and sheltering, and gets food, water, and doctors ready.

The following article lays out how the capitalist system’s disregard for anything but profit is helping to fuel climate change, which is producing more numerous and severe storms. At the same time, the most vulnerable to and hurt by earth’s increasingly volatile weather are the capitalist world’s poor nations and poor communities, as we’ve seen in Haiti, New Orleans, New York, and now Houston.

Yes, it is dumb not to ask questions about climate change, as Senator Bernie Sanders has pointed out.

It is dumber to not also question the current global economic system and policies perpetuating racial inequalities. The conversation must shift toward climate justice.

Houston residents have been feeling the impacts of increased flooding for years. Yes, Hurricane Harvey must be a turning point in the discussion on climate change.

Since rapper Kanye West’s support of candidate Donald Trump, we don’t expect a similar off-script outburst about “not caring about black people.” But how can racial disparities be glossed over when reports of strong oil and chemical smells are coming from vulnerable fenceline communities, communities of color, which have disproportionately been unable to evacuate?

Particularly after the events in Charlottesville, VA and other cities, we must understand how these inequalities are entrenched in our free market system. Just as it’s important to see that Harvey was not isolated or exceptional, we need to make other connections, confronting outbursts of white supremacy while addressing the bigger picture.

This past bleeds beyond our own borders and shapes the limits of our empathy in what Tiffany Willoughby-Herard called “global whiteness” as a value system that renders people in what Vijay Prashad calls “Darker Nations” insignificant, even invisible.

We witness this value system in the limited coverage of the heavy monsoons and the high death toll in India, Bangladesh, and Nepal. We witnessed it when Category 4 Hurricane Matthew pummeled Haiti’s southwest peninsula. There has been little to no conversation about Haiti rapidly rising on the list of most climate-vulnerable nations from 7th to 3rd in the past six years.

Hopefully the visibility of Hurricane Harvey’s destruction will inspire solidarity rather than competition over whose lives matter.

Ironically headquartered in Houston, the fossil fuel industry has been funding a half-billion-dollar, decades-long climate change denial campaign. But as Naomi Klein argues, this is just the tip of the (melting) iceberg.

While we must kick the capitalist system’s fossil fuel addiction to stem climate change, we must also take a critical closer look at our industrial food system, the world’s largest industry. According to GRAIN, between 44% and 57% of all Greenhouse Gas Emissions (GHG) come from the global industrial food system.

Hurricane Matthew, which made landfall on Haiti almost 11 months ago on Oct. 4, 2016, was mostly forgotten and ignored. The relief effort was underfunded. Tellingly, those who died in the days after the storm passed were not included in the death toll. To put it simply, they were andeyò, “outsiders.” Poor, black, and rural, their lives didn’t matter, and their deaths don’t count.

Matthew was certainly a disaster foretold. For many preceding years, farmers across the country had been talking about drought, desertification, intensified labor due to the changing rainy seasons. As determined communities attempted to replant and rebuild after the hurricane which took 80-100% of agricultural crops and 50% of livestock, an onslaught of rain, drought, flooding, and heavy winds conspired to make food scarce over nine months after the storm.

The cost of imports from outside Haiti or from big cities have skyrocketed, forcing formerly self-sufficient families to spend more money on food while sacrificing school and hospital fees, among other needs. Drought-resistant crops which had sustained communities in the three years of drought preceding Hurricane Matthew rotted at the roots or were taken away by the winds, including pigeon peas, millet, and tubers such as sweet potato. Adding insult to injury, fierce winds ripped down fruit that had started to appear on mango and breadfruit trees months after Matthew.

Grassroots organizations in Torbeck are doing what they can. Jean Molin of the Lafrisilien Peasants Association denounced that “the government never once came and checked on us,” while Oscar Romero TKL’s Rachelle Moïse critiqued “paternalistic” foreign agencies for “failing to address our needs with their top-down, pre-determined aid.” While their food security continues to be precarious, those living off footpaths in the mountains – who can still be found living in caves – fare much worse, with little to no hope of receiving aid or relief.

These are the stories that must be told when we talk about the warming climate, justice, and human rights. To silence these stories makes us complicit, not just dumb, in the devaluing of human life and the ongoing destruction of our environment.

Food sovereignty and agro-ecology need to be a part of our future. The mechanized, chemical-laced agriculture that emerged after the 1960's corporate “green revolution” exacerbated global hunger and inequality while simultaneously exploiting people and despoiling nature. Reports by GRAIN indicate small landholders produce 70% of the world’s consumed food, on less than a quarter of the land, directly addressing both global hunger and climate change.

We must hear, understand – and heed – the voices of fenceline communities in Houston, Haitian families most affected by Matthew, indigenous peoples, hunters and gatherers, family farmers, rural workers, pastoralists, and fisherfolk, among others. The knowledge of frontline communities is crucial to a cooler climate and a more just global economic system.

An earlier version of this article was published on the Huffington Post website under the title “Dumb and Dumber: Foregrounding Climate Justice from Harvey to Haiti's Matthew.” K. Jessica Hsu is an Anthropologist and solidarity activist who has spent most of her last 15 years working with communities in rural Haiti looking at issues of labor, agriculture, gender, and community development. She is currently based in Port-au-Prince working with American Jewish World Service Partners as International Advocacy and Communications Officer and is Secretary of the Lambi Fund of Haiti. Anthropologist Mark Schuller has three dozen scholarly publications on NGOs, globalization, disasters, and gender in Haiti. Schuller wrote or co-edited seven books, including Humanitarian Aftershocks in Haiti, co-directed the documentary Poto Mitan: Haitian Women, Pillars of the Global Economy, and is chair of the Lambi Fund of Haiti.