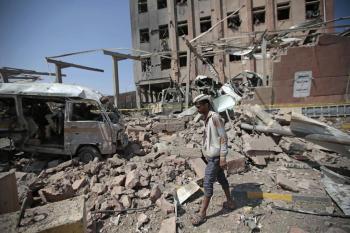 The Canada-Wide Peace and Justice Network wrote the following letter condemning the Canadian government and Canadian companies’ ongoing profiteering off of arming Saudi Arabia and sending weapons to the worst humanitarian situation on the planet in Yemen.

We’re pleased to announce that 68 organizations across Canada, representing nearly one million people, have signed on to demand that Canada #StopArmingSaudi and to highlight 28 companies in Canada complicit in this arms deal.

On March 1st, the letter was delivered to Prime Minister Trudeau’s office. Throughout the week it will be delivered to the companies and government officials named across Canada.

More on Canada's role in supporting the Saudi-led war in Yemen:

Under Trudeau, Canada Is Saudi Arabia’s Most Dedicated Gunrunner

n the run-up to Canada’s 2015 federal election, Liberal leader Justin Trudeau promised voters a renewed vision of Canadian foreign policy, including hikes in foreign aid, deployments of Canadian UN peacekeepers, and the use of a feminist perspective. Under Trudeau, Canada was supposed to be a broker of peace and a beacon of progressive values.

However, during Trudeau’s time as prime minister, Canada has exported more weapons abroad than at any point in its history. Some of these arms sales have been directed to the most repressive regimes in the world.

Canada’s top customer for arms, apart from the United States, is Saudi Arabia, a regime that is guilty of human rights abuses at home and war crimes abroad. The Saudi Kingdom is the leader of a coalition that has committed well-documented international humanitarian law violations — including the indiscriminate targeting of civilians — in Yemen’s civil war. By approving the export of arms to the Saudi regime, Trudeau’s government is complicit in such atrocities.

In 2014, Canada’s Conservative government brokered the sale of hundreds of light armored vehicles (LAVs), manufactured by the company General Dynamics Land Systems-Canada (GDLS-C), for the Saudi Arabian National Guard. Worth $14 billion, this arms contract was the largest in Canadian history.

While the Conservative government may have orchestrated the deal, it was the Liberals who actually greenlighted the arms shipments. Government documents published in April 2016 show that Trudeau’s minister of foreign affairs, Stéphane Dion, formally approved the export of the LAVs more than four months after the Liberals took power. The memo describes Saudi Arabia, a state that uses mass executions as a means of political repression, as a “key partner for Canada” and a “regional leader promoting regional security and stability.”

Following the assassination of dissident journalist Jamal Khashoggi by Saudi agents in October 2018, Canada did freeze arms exports to Saudi Arabia. However, this pause affected only new export permits. It did not prevent any of the LAVs that had already received permit approvals from leaving Canadian soil. In fact, exports even increased by 111 percent over this period of roughly a year and a half.

As Biden changes tune on Saudi Arabia, will Canada keep shipping armoured vehicles to the kingdom?

Six weeks into the Biden presidency, time may be finally running out for the Saudi Arabia-led coalition waging war in Yemen.

On Feb. 4, during an address at the State Department, the U.S. leader characterized the conflict in Yemen, in which a quarter of a million Yemenis have died since 2015, as “a humanitarian and strategic catastrophe.” In his speech Biden, who on the campaign trail had called Saudi Arabia a “pariah,” announced an end “to all American support for offensive operations in Yemen, including relevant arms sales.”

Signalling a sea change from the Trump administration, the U.S. also released a hitherto-classified national intelligence report indicating the de facto Saudi ruler, Prince Mohammed bin Salman, authorized the murder of a dissenting journalist, Jamal Khashoggi, whose body was sawed to pieces in the Saudi consulate in Istanbul.

In the past two years, activists in the U.K. and Belgium have won important court rulings ordering their governments to stop issuing weapons export permits to Saudi Arabia. Germany stopped exporting weapons to the country in November 2018, partly in retaliation for Khashoggi’s murder the month before.

Where does that leave Canada?

A multi-billion-dollar contract to supply light armoured vehicles to the kingdom has been the source of controversy for years.

Now, an international law expert and judicial activist is taking aim at the Trudeau government’s oft-repeated assertion that it cannot back out of the contract without incurring financial penalties.

Daniel Turp, a retired University of Montreal law professor and former Bloc Québécois MP and Parti Québécois legislator, believes the parameters of the contract are so defined that any judgment made against Canada for non-fulfilment of its conditions would likely be unenforceable.