Film review: Battle for Haiti and We Must Kill the Bandits 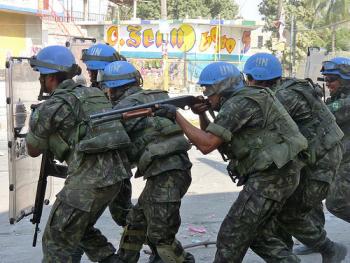 By Ansel Hertz
Published on Mediahacker, January 13, 2011
On Monday night at a Port-au-Prince hotel, a foreign media worker overseeing a bustling workspace for international journalists was called into the hallway by a Haitian hotelier. He reemerged in the room and demanded everyone’s attention. The Haitian staff of the hotel were going straight home. Their families had called fearing violence would erupt in the streets, after a controversial speech by President Rene Preval in which he suggested he would stay on as head of state past for a few more months.

“If you don’t have private security with you, you should go back to where you’re spending the night right now,” he said gravely. The foreign journalists exchanged nervous glances and some took their leave.

When I was ready, I left by bike to go home. The streets looked quiet, calm, normal. It seemed no such violence had broken out, not last night and not in the days after.

This is just to point out that fear of out-of-control violent Haitians is ever-present and often wholly disconnected from reality among the establishment foreign media and the privileged class of Haitians with which it mostly interacts.

The latest manifestation of that fear, in highly concentrated and sensationalized form, is Dan Reed’s new PBS Frontline documentary “The Battle for Haiti,” which lauds the United Nations peacekeeping mission and Haitian police chief Mario Andersol for waging a heroic but doomed battle against violent gangs. The film received a supportive, shallow review in the New York Times.

“We Must Kill the Bandits”, another new documentary, seemingly destined for obscurity but far more illuminating, examines the same so-called battle from a radically different angle. It’s the work of Kevin Pina, a Creole-speaking American journalist who has identified closely with Haiti’s political Lavalas movement for nearly twenty years. His is a tale of a grassroots struggle, with gang elements within it, straining to survive against an intense campaign of repression and assassination by the Haitian police and UN troops after the 2004 coup d’etat against President Jean-Bertrand Aristide.

Both documentaries have weaknesses, but only one acknowledges them. Early on, Pina says of Lavalas, “This is their story, seen through my eyes and the lens of my camera,” admitting his bias and limited view.

The Frontline film has no such humble self-awareness. The film opens with bum bum tchaaa Law and Order-style music set to dramatic shots of Haiti’s national penitentiary. For Reed, Haitian history begins on January 12, 2010, when 5,000 prisoners escaped. Inexplicably, one prisoner being interviewed is shown lying naked on his bed in the opening moments. The only imaginable reason is the filmmaker’s desire to be edgy and shocking, at the expense of the man’s dignity.

There is almost no reference to Haiti’s complex pre-quake history in the entire film, but for one absurd bit of narration. As the camera pans over Port-au-Prince’s slums and the music booms ominously, the distinctive Frontline narrator intones:

The escaped prisoners melted into the slums of the devastated capital. Among them, gangsters who once controlled much of Port-au-Prince. Now the earthquake gave them the chance to do so again.

The documentary is premised on this non-attributed false statement. When did gangsters control much of Port-au-Prince, a gigantic city of 10 million people, and who are they? I’m genuinely curious. Unfortunately for casual viewers who tuned in on the night before the one-year anniversary of the earthquake, it’s stated as unquestionable fact.

A bright spot is the way the film highlights the rape pandemic in the camps, interviewing several survivors. But it fails to explain much of anything about why the rapes continue unabated. Haitian women’s groups like KOFAVIV who say the UN’s humanitarian and peacekeeping branches have failed to address the rapes with camp lighting or competent nighttime patrols are not mentioned.

The rest of the Frontline film presents a predictable narrative of intrepid, under-equipped Haitian police and UN peacekeepers fighting against the tide of violent gangs. No camps are identified as having actually been taken over by gangs. No quantifiable rise in crime since the quake beyond vague alarm-raising by police (as they’ve been doing since the day of the quake about escaped prisoners) is described.

To its credit, Frontline publishes an interview on its website with the former head of MINUSTAH intelligence, who says the prison has “not substantially, really” affected the crime rate. So why are they airing a documentary that hypes up the polar opposite claim without evidence?

Somehow there isn’t even a mention of an Oct. 17 breakout from the national penitentiary, which the UN peacekeeping mission knew was planned beforehand but failed to stop, according to a secret US Embassy report.

My jaw dropped when Edmond Mulet, the UN peacekeeping mission chief, says “Haiti is a nation that committed collective suicide a long time ago.” The “resilience” of Haitians amidst grinding poverty may be mentioned a little too often and approvingly in the foreign media, to the point that it borders on dehumanization, but Mulet’s offensive statement is too far gone in the opposite direction.

Haiti is after all the only country in modern history born of a slave uprising and has been resisting foreign influence ever since. With the UN’s apparent introduction of cholera into the country, along with dozens of alleged uses of reckless force (pepper spray and tear gassing earthquake survivors), calls for the UN troops to withdraw have only grown louder in the past year.

Inconvenient for Reed, Frontline, and Mulet, are recent comments by OAS diplomat Ricardo Seitenfus, along with a 2008 report in the Christian Science Monitor on Haiti’s reputation for violence:

“It’s a big myth,” says Fred Blaise, spokesman for the UN police force in Haiti. “Port-au-Prince is no more dangerous than any big city. You can go to New York and get pickpocketed and held at gunpoint. The same goes for cities in Mexico or Brazil.”

Pina’s film focuses on how decisions made in New York and Brazil, among other far-away power centers, to support a de facto regime with a heavily-armed peacekeeping mission after the 2004 coup impacted Lavalas supporters in Port-au-Prince. Large Lavalas demonstrations demanding Aristide’s return were met with targeted violence again and again from the Haitian police as UN peacekeepers looked on.

“We Must Kill the Bandits” stumbles at times when it shows dead men lying in the street and claims, without clear documentation, that they were victims of Haitian police – the Frontline film does the same thing, except claiming to claim that gangs are responsible. I wonder if Pina could have corroborated more of his claims with primary and secondary sources, which Reed completely fails to do. Of the supposed thousands of escaped gang members wreaking havoc on Port-au-Prince, Reed manages to interview only one who will admit to being one. Pina ignores accusations against pro-Lavalas gangs of violent crime directed at other Haitians.

The second half of Pina’s film, however, is excellent. The Brazilian commander of the UN condemns killings by Haitian police in the press, but when confronted face to face by another Lavalas demonstration, he angrily tells them to respect the police. “You are stealing our rights, commander!” the protesters yell back.

The film reaches a terrifying, graphic climax with the July 2005 UN-led assault on Cite Soleil, in which UN troops expended 22,000 rounds in just seven hours. Residents of Cite Soleil tell the camera in plain terms, over and over, that the UN troops are shooting up their churches and killing their families. Women let out blood-curdling screams as one cries over her husband’s body, “Let me die now, he was everything in my life!”

We learn as the credits roll that every major Lavalas leader, from the former Prime Minister to singer So Anne, has been released, with all charges dropped, after being jailed by the de facto regime.

If you’re looking for an entertaining, tense cops-and-robbers drama without regard for Haitian history or the truth, the Frontline documentary will do just fine. “The Battle for Haiti” is the work of a man who doesn’t speak the language, had never been to Haiti before the quake, with a mindset, common with many other journalists, that plays on long-held stereotypes exaggerating the violence of Haitian society. But like the rest of the establishment media, the film pretends to have no bias in its portrayal of Haiti.

Pina goes to the other side of the authorities’ guns and fragmentation bombs. It’s not perfect, but “We Must Kill the Bandits” convincingly conveys the struggle of Lavalas’ base against violent attempts to smother it after the coup, which itself was massively misreported as a popular rebellion. That Reed’s film airs on PBS and is promoted in the New York Times, while Pina’s sits on his website, is indication of how far the US media has to go in learning from its past mistakes.

To view or order “We Must Kill the Bandits,” see the information posted on the Canada Haiti Action Network website, here. “Battle for Haiti” can be seen, here. Two other recent Haiti documentaries I’d recommend are Poto Mitan and Filmat11′s five-part series.