Five heavily armed U.S. ‘mercenaries’ were arrested in Haiti. Why were they allowed to fly straight home? 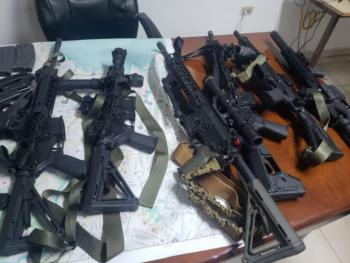 Some of the weapons found in the possession of the foreigners. CaribbeanNewsNetwork/Twitter

A group of heavily armed men — including five American citizens — who were arrested in Haiti at the weekend have been inexplicably allowed to leave the country.

Now back in the U.S., they will face no charges, the Miami Herald reports.

As riots over official corruption engulfed the nation, the eight men were captured Sunday in the capital Port-au-Prince by Haitian police. In their vehicles — which had no external number plates — were found automatic weapons, pistols, a telescope, satellite phones, drones and ballistic vests. Fake number plates were also found.

The men, apprehended near the country’s central bank, said they were on a “government mission,” when stopped by police. Police spokesman Michel-Ange Louis-Jeune said the men refused to say anything else except that they would call their unidentified bosses. Which “government” the men spoke of was never made clear.

Despite their arsenal and apparent criminal conspiracy charges laid by Haitian police, seven of the men were subsequently allowed to fly back to the U.S. on Wednesday, having never appeared for a Port-au-Prince court date set for the same day. Only the Haitian Estera was left behind.

“They left,” a police spokesperson told the Miami Herald Wednesday.

Haiti’s prime minister has said he wasn’t even briefed on the men’s departure, but theories as to what exactly the men were doing in the country are swirling. As well as allegations they came to work against the embattled government, claims have been made by government opponents that they were there to prop it up.

The men are since said to have told American authorities that they were in Haiti as security for a government-partnered “businessman.”

As the men made their hasty exit, footage posted to social media shows them being escorted by U.S. embassy staff through Port-au-Prince’s Toussaint Louverture Airport, without handcuffs or shackles. In fact, the Miami Herald reports they were given access to the VIP diplomatic lounge to wait for their commercial flight. When, initially, one of the Serbs was not allowed to board the flight, “a few calls were made” and he was let board, the Herald reports.

The Herald said the U.S. government stepped in and arranged the exit to protect the men, after Haitian Prime Minister Jean Henry Ceant had gone on CNN and said the group were “mercenaries” and “terrorists.”

But the Herald’s Jacqueline Charles told NPR that, in fact, “members of the administration of President Jovenel Moise did try to get these gentlemen released from police custody — but that did not work.”

Yet released they eventually were; a letter seen by the Herald shows that it was Haitian Minister of Justice Jean Roody Aly who authorized the sending of the group to the U.S. — to “stand trial.”

The U.S. State Department said in an emailed statement to the Associated Press that the return was co-ordinated with Haitian authorities.

Complicating things further, a spokesman for Ceant told Radio Vision 2000 on Thursday that he was not aware of the men’s departure and demanded an immediate explanation from the justice minister.

When the men arrived in Miami on an American Airlines flight, they were initially detained by U.S. authorities, but this didn’t last long.

Carel Pedre, a Haitian media personality, said in a video posted on Facebook that he was on the flight to Miami with the men and posted a video of them on social media. He said that when the half-empty plane landed, the crew announced that officials would be boarding it before anyone could disembark. He then said U.S. officials led the men away.

However there was no public record Thursday morning of any charges against the men in Miami federal court, and federal sources later told the Herald that the men won’t face U.S. criminal charges, but will instead be “debriefed.”

The Miami U.S. attorney’s office referred all questions about the men’s status to the State Department, which did not issue further comment.

Pierre Esperance, executive director of the National Human Rights Defence Network, expressed dismay at the ease with which the men were allowed to slip away.

“We can’t even tally the amount of money they have spent since 1995 on not just reforming the Haitian justice system, but the penal code and the police … The American government has spent a lot of money.”

As well as American aid, Haiti has also hosted two long-running United Nations missions since 2004, both of which have been heavily involved in training police and improving institutional capacity.

Jean Clarens Renois, a former presidential candidate, said in a phone interview that the situation has eroded confidence in Haiti’s government.

“The seven guys easily left the country,” he said. “It’s kind of incomprehensible for a nation. There is no authority at all.”

The arrests came after more than a week of violent demonstrations in which Haitians demanded the resignation of President Moise amid rising inflation and allegations of corruption. Ceant has promised to reduce certain government budgets by 30 per cent, lower the cost of goods and investigate allegations of misspending tied to a Venezuelan program that provided Haitiwith subsidized oil.

Haitians, however, remained wary of those promises, and Renois said people have lost trust in the government especially given the outcome of the case involving the eight men.

“I used to read that Haiti is a failed country,” he said. “Now we can say that.”