Forcing the UN to do right by Haitian cholera victims 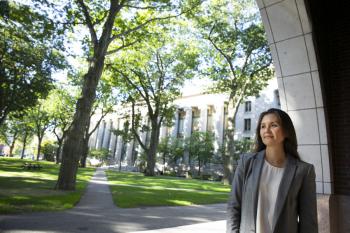 Freshly graduated from law school, Beatrice Lindstrom arrived in Haiti in October of 2010 on a one-year fellowship to work with the Bureau des Avocats Internationaux, a Haitian human rights organization. Soon after, the country was struck by an outbreak of cholera traced to a sewage leak from a base of U.N. peacekeepers, who had been brought there to help after an earthquake earlier in the year. The waste fouled Haiti’s principal river, sickening hundreds of thousands and leading to the deaths of at least 10,000. Ten years later the Bureau des Avocats Internationaux in Haiti, its U.S.-based partner, the Institute for Justice & Democracy in Haiti, and the International Human Rights Clinic at Harvard Law School, where Lindstrom is now a clinical instructor, are leading efforts to achieve justice for victims of the epidemic. The Gazette interviewed Lindstrom about her still unresolved, decade-long efforts on behalf of the victims.

GAZETTE: How did you first get involved in this case?

LINDSTROM: A couple of weeks after I arrived in Haiti, cholera broke out for the first time in the country’s history. At first, we didn’t think of it as an issue that required the involvement of lawyers — it seemed like a severe public health emergency. But shortly after the outbreak started, it became clear that U.N. peacekeepers were responsible for introducing the disease through their reckless waste management.

The evidence was so obvious that we were hoping that the U.N. would launch an investigation and provide a just response. When that didn’t happen, we started to look at legal avenues to hold the U.N. accountable. We pursued legal claims through the U.N.’s internal claims system. When the U.N. refused to receive the claims, we filed a lawsuit in court in the United States. We also worked with an expansive coalition of victims’ groups in Haiti and international human rights groups, all of which were trying to persuade the U.N. to do the right thing. Only in 2016, six years later, the U.N. finally accepted responsibility and committed to doing more for victims.

GAZETTE: But owing to U.N. inaction your group has since filed a complaint. What is it calling for the U.N. to do?

LINDSTROM: The U.N. has well-established treaty-based obligations to provide compensation to civilians who are injured during the course of peacekeeping operations when it’s due to the negligence of the organization. In the cholera case, the U.N. refused to receive claims in accordance with that obligation and refused to refer the claims of any independent hearing on responsibility. Facing mounting public pressure, in 2016, the secretary-general issued an overdue public apology and committed to providing $400 million in response to affected communities in fulfillment of what he called the U.N.’s “moral responsibility.” It’s been four years since that initiative was launched, and the U.N. has raised only 5 percent of the $400 million. This has effectively left victims without remedies for the harms that they suffered. We filed a complaint with the U.N.’s own human rights experts, called special rapporteurs, alleging that the U.N. is violating the human right to effective remedy. The complaint was successful in triggering a review by 14 U.N. special rapporteurs, who brought the matter to the secretary-general and adopted our analysis that the U.N. is violating human rights by denying victims compensation. It is unprecedented for such a broad group of U.N. human rights experts to allege that the organization itself is violating human rights in this way. This past June, the secretary-general responded to the special rapporteurs, acknowledging that the allegations were correct, but refusing to engage with the conclusion that this amounts to a violation of human rights. We were very disappointed to see that, especially coming from the U.N. secretary-general himself.  But we also recognize that the complaint is a part of ongoing advocacy to continue to hold the U.N. to its promises, and has been significant in refocusing attention on the inadequate response. As we’re approaching the 10-year anniversary of the introduction of cholera to Haiti, it is high time for the U.N. to deliver on those commitments.
GAZETTE: How does it feel personally to still be doing this work after 10 years?

LINDSTROM: If you had told me in October of 2010 that I would still be doing this work 10 years later, I think I would have felt both exasperated and heartbroken that the U.N. still has not responded justly to victims of the epidemic. At the same time, this has been a very long struggle that has been led by victims and affected communities in Haiti. As long as they are pushing for justice for their families, it’s a privilege to be able to stand alongside them. I feel fortunate to now be able to bring the struggle to the clinic. It’s been really wonderful to have the enthusiasm of students who are oftentimes being introduced to this issue for the first time, and who see it with such a strong sense of moral clarity. We’ve been at it for 10 years. If it takes another 10, I do hope that at the end of it, the U.N. is able to live up to the human rights principles that it champions in the world by respecting cholera victims’ rights.

GAZETTE:What’s the urgency of the U.N. to compensate victims of the 2010 cholera outbreak when the world is going through the COVID-19 pandemic?

LINDSTROM: What we’re seeing today is the breakdown of international organizations, of multilateralism, of the world being able to come together in a time of crisis. At this moment, more than ever, we need a strong and effective United Nations. The cholera case and the fact that the U.N. has not provided remedies to victims and implemented both legal and moral obligations in this case has undermined the organization’s credibility. By providing justice to victims in Haiti, the U.N. could set a really powerful example of what it means to take a human rights-based approach to disease response that would do the organization well, both in reestablishing its moral authority and in demonstrating to countries what a human rights-based approach could look like in the context of COVID-19.

“If you had told me in October of 2010 that I would still be doing this work 10 years later, I think I would have felt both exasperated and heartbroken that the U.N. still has not responded justly to victims of the epidemic.”

GAZETTE: What has the U.N. done to prevent something like this from happening again?

LINDSTROM: One of the lesser-known tragedies of the Haiti disaster is that it has not triggered the kind of corrections to U.N. protocols that one would expect after waste mismanagement caused the death of 10,000 people. The U.N. has made some changes to protocols to prevent this from recurring in the future, but implementation and effectiveness are questionable. For example, the U.N. has changed its medical screening protocol of peacekeepers, and now vaccinates peacekeepers for cholera prior to deployment. But separate studies have shown that this is not the most effective way to prevent the transmission of cholera. Perhaps more alarmingly, the U.N. has made important changes to its sanitation protocols, including that it will treat waste on its bases before it’s disposed of into the local environment. But a series of audits that have been conducted over the course of the last 10 years by the U.N.’s own audit office show that the implementation has been incredibly spotty. On U.N. bases around the world, they found continued disposal of untreated waste directly into the local environment and other waste-management problems that create a high risk of negative health impacts on the local populations where peacekeepers operate.

GAZETTE: What is the status of cholera outbreak in Haiti? How hard has the country been hit by COVID-19?

LINDSTROM: Ten years later, by official records, it appears that cholera cases are finally down to zero. But there’s continued concern by some public health experts that new cases may not be captured because of the closure of cholera treatment centers. It does seem that we’re finally reaching a long-awaited low point in the cholera epidemic, though, and that it may be possible to finally fully eliminate cholera with investment in clean water and sanitation. This does, of course, coincide with the COVID-19 pandemic, which especially raises concern for people who were already impacted by cholera. They are particularly vulnerable because they often still lack access to clean water, and many have lost breadwinners and continue to suffer the ongoing economic consequences of cholera, making it more difficult for them to protect themselves from COVID. Thankfully, it does not seem that the COVID-19 outbreak in Haiti has been as severe as many people feared when it first started. But again, there are concerns about testing capacity and whether the numbers that are being reported are reflecting the true prevalence of cases.

GAZETTE: What do you hope to see happen with the complaint?

LINDSTROM: My hope is that the U.N. will finally follow through on its promises and do right by victims in Haiti by providing compensation, and by involving them in the decision-making process around remedies. I appreciate that we are in a time when the organization is under severe financial constraint. At the same time, in the context of other expenditures of the organization, the amount of money that the U.N. would need to put toward remedies for victims pales in comparison to how much it has invested, for example, in military operations of Haiti. Funding remedies for victims is really a question of political will.

Arriving at a just response will require continued mobilization of people both inside and outside the organization who believe that the U.N. should stand for human rights through both the words that it puts out and the actions that it takes. By doing the right thing in Haiti, the U.N. can go a long way in reinforcing its commitment to human rights and demonstrating the importance of human rights. This is ever important in the context of the multitude of challenges the world faces today.

As we approach the 10-year anniversary of the outbreak, it’s also important to remember how far we’ve come. It’s an outrageous injustice that victims are still fighting for compensation from the U.N., of all actors in the world. At the same time, when we started this work, nobody was really paying attention to what was happening in Haiti. The assumption was that cholera just happens in poor countries and victims’ calls for justice were very much being marginalized. Now, there’s no question that this will go down in history as a huge misstep by the U.N. that should not be repeated. As we look to the future, the U.N. has an opportunity to learn from what happened in Haiti by doing more to prevent future harms, and by ensuring that the organization is accountable when harms do occur. I am hopeful that the U.N. will look at this experience as an opportunity to strengthen the organization’s accountability and its commitment to the people it serves.

This interview has been condensed and edited for length and clarity.