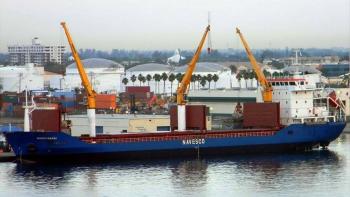 The MV Manzanares with a Panamanian flag was seized by Haitian authorities after it was found to be carrying loads of cocaine and heroin in 2015. It is pictured here at Port Everglades in Fort Lauderdale. MARINE TRAFFIC

The former chief of the Haiti National Police’s anti-drug unit, who lost his command after being implicated in a bungled Haitian drug-smuggling operation, is in U.S. immigration custody in Miami.

Joris Mergelus quietly flew last week from Haiti to Miami International Airport, where he was immediately taken into custody by U.S. Immigration and Customs Enforcement.

During questioning, Mergelus asked for asylum, according to sources familiar with his case. He was carrying about $7,000 cash and documents.

Mergelus, who is currently being held at the Krome North detention center, is linked to a narco-trafficking investigation by the U.S. Attorney’s Office that grew out of a 2015 drug-smuggling operation in Haiti involving the disappearance of multiple kilos of cocaine and heroin.

At the time of his departure from Haiti, Mergelus was under investigation by the Haiti National Police. Investigators were looking into allegations by Drug Enforcement Administration whistle-blowers that as head of the Brigade in the Fight Against Narcotics Trafficking, Mergelus took bribes to hinder a police investigation of a “sugar boat” that arrived in April 2015. The Manzanares MV was loaded with bags of sugar along with 700 to 800 kilos of cocaine and 300 kilos of heroin — most of which disappeared. The drugs had an estimated U.S. street value of $100 million.

Mergelus was suspected of destroying evidence in the Manzanares investigation, according to investigators.

DEA whistle-blowers believe that Mergelus had given kickbacks to a DEA supervisor in the past from funds for confidential sources, equipment and other expenses. He also had previously failed two lie-detector tests given by the DEA about his relationship with drug dealers, the whistle-blowers say.

Mergelus was removed as the head of Haiti’s drug unit, BLTS, in 2017 and assigned to a desk job.

Mergelus strongly denied any links to drug traffickers. In a previous interview with the Herald, he said the litany of allegations “truly surprises me” and that he believes he’s being made into the fall guy for what is really an internal conflict among DEA agents in Haiti. He challenged the claim that he had failed the polygraph tests.

“If I didn’t pass, why did they accept me as head of BLTS?” said Mergelus, who joined the narcotics unit in 1997 and became its commander in 2011. “All the big drug arrests in Haiti, I did.”

The Miami Herald broke the story that the U.S. Attorney’s Office in Miami was investigating the sugar-boat drug smuggling operation, and that the U.S. Justice Department was probing separate allegations of wrongdoing by DEA agents suspected of bungling the April 2015 case.

In May, a dock worker in the case pleaded not guilty to a drug-smuggling conspiracy charge in Miami federal court after he was extradited to the United States. Gregory George, 32, is the first and only defendant to face prosecution so far in the cocaine and heroin distribution case.

A federal magistrate judge, Edwin Torres, granted George a $250,000 bond based on a joint recommendation by prosecutor Kurt Lunkenheimer and the federal public defender’s office. George, however, has not posted bail and is still in custody at the Miami Federal Detention Center. His trial is scheduled for Aug. 19.

Samantha Feinstein, a senior legal analyst with the Government Accountability Project, which represents federal employees with whistle-blower complaints, said it’s her belief that George’s indictment in Miami and Mergelus’ subsequent travel to Miami are “absolutely related.”

“His flight is a result of panicking the drug trafficking organization that is under increasing threat of exposure thanks to the progress made by the DEA whistleblower on the Manzanares investigation,” she said about Mergelus. “We hope that Mr. Mergelus will cooperate with the United States fully on the investigations that are ongoing. Unfortunately, the DEA’s Caribbean division management that shielded Mr. Mergelus for five years has insisted on removing the agent who is responsible for bringing him to justice from the case next week.”