Haiti and Venezuela stand shoulder to shoulder this May day 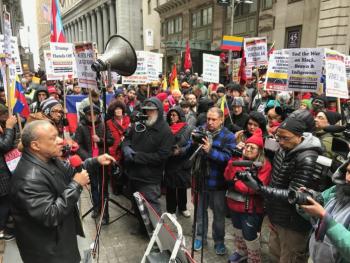 On May 1, 2019, International Workers Day, hundreds rallied at the Trump Building at40 Wall Street to denounce the Trump administrations war on immigrants andVenezuela. The rally’s theme is: “No walls in the workers struggle! No war onVenezuela!” Marie-Paule Florestal read the following statement on behalf of Haïti Liberté newspaper.

Sisters and Brothers, Friends and Comrades,

Almost a year and a half ago, hundreds of Haitians and their supporters gathered here in front of 40 Wall Street to denounce Donald Trump’s impudence and ignorance in calling Haiti a “shithole country.”

He made the remark about 50,000 Haitians who had been granted Temporary Protected Status or TPS since Haiti’s 2010 earthquake. He said they did not deserve to continue living and working in the U.S. and yanked their TPS. On that bitterly cold Jan. 19, 2018, we denounced the Trump administration’s action as racist and politically motivated. We in the “1804 Movement for All Immigrants” repeated the charge in a national rally in front of the White House a year ago, on May 19, 2018.

But we didn’t just rely on the streets to send our message. We sued Donald Trump in Federal court. Haïti Liberté along with 11 other plaintiffs charged during a January trial in Brooklyn that the Trump administration had violated the law, procedure, precedent, human decency, and common sense.

On Apr. 11, we weren’t alone in calling Trump a racist, anti-immigrant scoundrel. Federal Judge William Kuntz agreed with us and ruled in our favor, putting an injunction against Trump’s deportation of TPS Haitians.

Donald Trump, you put your foot in the wrong shithole.

Despite this resounding victory, we are faced with an extremely critical situation as we gather here today. The Trump administration, using its puppet Juan Guaido, is making a final desperate bid to bring about a violent coup d’état and foreign military intervention in Venezuela.

The Venezuelan revolution of the last two decades and Haitian revolution underway today are closely linked. Over the past decade, on the initiative of President Hugo Chavez, Venezuela has provided Haiti with some $4.3 billion in oil at discount prices and with fantastic credit. Half of the revenues from the oil’s sale went into the PetroCaribe Fund, which Haiti was supposed to use for development projects to benefit its impoverished masses. Instead, a U.S.-installed right-wing clique, still in power, stole most of the money. Today, the Haitian people are rising up to demand their overthrow and arrest.

Two centuries ago, Latin America’s first independent nation, Haiti, gave aid and soldiers to Simon Bolivar to liberate South America from Spain. That is the debt that Hugo Chavez and Nicolas Maduro said they were repaying with the PetroCaribe deal.

On this International Workers Day, the Venezuelan people are resisting, the Haitian people are rising, immigrants in this country are mobilizing, workers across the planet are marching, and the capitalist ruling classes are divided and faltering.

Sisters and brothers, let us hold high the banner of international solidarity this May Day. An attack on one of us is an attack on all of us. As we say in Kreyòl: “Annou kole zepòl nou.” Let us glue our shoulders together as we march forward to a more just, democratic, humane, and sustainable future.