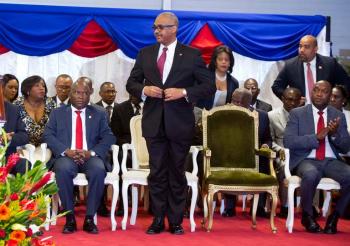 The United Nations’ top expert on poverty criticized the International Monetary Fund’s continued push to force Haiti to remove fuel subsidies on Monday, and said donors such as the World Bank and Inter-American Development Bank should help poor Haitians cushion the blow of the extra cost by increasing assistance to the country.

“The fund has consistently underestimated the importance of calibrating their recommendations to the specific political context, not taking into account the extent to which recommendations are politically viable and socially sustainable,” said Philip Alston, the U.N. special rapporteur on extreme poverty and human rights.

He said the dramatic increase in fuel prices a week ago that led to burning barricades on the street and the resignation of the prime minister on Saturday was “guaranteed to lead to a backlash and bizarrely, undermine the very programs the fund is trying to implement.”

In an interview with the Miami Herald, Alston said IMF leaders should have known that a 38 percent increase on gasoline, 47 percent on diesel and 51 percent on kerosene, would be “highly problematic.”

The increases were almost immediately temporarily suspended 14 hours after they went into effect. But the IMF’s continued insistence on the hikes, even after the deadly protests, the cancellation of U.S. flights and the resignation of Prime Minister Jack Guy Lafontant and his cabinet, ignores Haiti’s political and social fragility, said Alston, who has offered his independent expertise to Haitian President Jovenel Moïse to investigate human rights issues affecting the poor.

“Instead of saying, ’We blew it and we will try to work on something which is more manageable,’ it takes a hard line,” he said of the IMF, which last week said it was anxiously awaiting a revised agreement with the Haitian government that included gradual increases on the price of fuel accompanied by social programs like transportation vouchers to ease the impact on the poor.

Haiti entered the original agreement with the monetary fund because it would give the poor country access to an initial $96 million in grants and loans. And successfully implementing the agreement with the IMF sends a signal to other potential donors who could help Haiti by providing more aid.

“It’s a very bad dynamic and politically highly problematic,” Alston said of the IMF’s continued pressure on the government.

Alston’s criticism came as Moïse began a search for a prime minister to head a new government. In a three-minute address to the nation late Saturday, Moïse said he understood “the situation of a lot of compatriots that unemployment, hunger and misery are killing them,” and plans to appoint a new prime minister as soon as possible to “form an inclusive government whose mission will be to alleviate the misery of the Haitian people.”

That new government will inherit a country with a crushing deficit and debt that has gone from less than $200 million after the devastating January 2010 earthquake to about $2 billion — most of it owed to Venezuela.

“The IMF has been obsessive about removing fuel subsidies for a very long time in countries around the world, because it says the subsidies benefit the middle and upper classes more than the poor,” Alston said. “But you’ve got to work gradually... it has to be a longer-term exercise. The social and economic and political consequences of cuts of that size are very large. “

The next head of Haiti’s government, he said, “will have to persuade the IMF that the package to be discussed needs to be palatable, needs to be sellable...”

“The one thing that is not a real option for a relatively powerless country like Haiti is to say ‘IMF go to hell,’” Alston said. “The IMF remains the single most powerful player in all of these negotiations. It sends the signals to all the others in the international community.”

Alston said he has not gotten a response from Moise to his offer to investigate human rights issues affecting the poor in Haiti. Such an investigation would look at the recent IMF-induced fuel price hikes and subsequent protests, and likely also look at the U.N.’s responsibility for the cholera crisis in Haiti.

On Monday, 60 human rights organizations from Haiti and around the world sent a letter to U.N. Secretary-General Antonio Guterres calling on the U.N. to fulfill its responsibilities to those affected by the deadly cholera outbreak that occurred 10 months after Haiti’s earthquake. Alston has called the U.N.’s refusal to accept responsibility “a disgrace.”

“I still think there is a need for the U.N. to accept responsibility and all the legal consequences that go with that, which they have not done,” Alston said.

The Trump administration accused Alston of exaggerating the numbers, and following the report announced it was leaving the U.N. Human Rights Council.

“The whole history of Haiti should stand as a strong rebuke to the international community. It’s clear that successive Haitian governments haven’t done all they could have, for there to have been such a miserable situation for so many decades with no breakthrough,” Alston said, “but there ‘s got to be a shared responsibility there, between the international community and the Haitian government. It’s not a one-sided picture.”