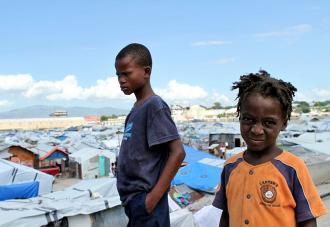 By the Center for Constitutional Rights, Washington DC
November 18--This week, the Inter-American Commission on Human Rights (IACHR) directed the Haitian State to stop evicting earthquake survivors from displacement camps unless they are provided safe and adequate shelter. The directive is in response to a formal request filed by human rights advocates who testified in October about an epidemic of forced evictions from the camps. The request was filed November 2, 2010 by the Center for Constitutional Rights (CCR), Institute for Justice & Democracy in Haiti (IDJH), Bureau des Avocats Internationaux, the International Human Rights Law Clinic at American University’s Washington College of Law and the disaster law center You.Me.We.

Read the IACHR press release here.
“We want the hundreds of thousands of Haitians threatened with forced evictions to know that these evictions violate Haitian and International law and that they are entitled to human rights protections,” said Nicole Phillips, IDJH Staff Attorney and Assistant Director for Haiti Programs at the University of San Francisco School of Law. “We hope that the International Community will also respect these recommendations and assure that their actions do not directly or indirectly support unlawful evictions.” Ms. Phillips said that the recommendations would be translated into Haiti Creole and released at a Port-au-Prince press conference on November 22, 2010.
The IACHR calls on the Haitian State to implement a moratorium on forced evictions; to provide remedies to camp residents who are forcibly evicted; to provide adequate alternative shelter to people forced out of a camp; to train the police and other government agents on human rights standards that prohibit forced evictions; to protect people inside the camps, particularly women and children, from violence and other abuses that are often associated with unlawful eviction; and to ensure that international organizations have access to the camps.
“This is a significant victory for the people of Haiti," says Kathleen Bergin, You.Me.We. Director, and law professor at South Texas College of Law. "Forced evictions pose a grave risk of serious and irreparable harm when displaced people have nowhere else to go, especially now in light of a growing cholera epidemic. We fully expect the Government of Haiti to respect its obligations under international law and comply with the Commission's directive.”
“The directives are a modest but important step forward by the international community,” said CCR legal director William Quigley. “There are over a million women, men and children who are homeless in Haiti right now, safe housing is just one human rights protection that is critically needed right now.”
Data from international monitoring agencies indicates that nearly 40,000 camp residents have been evicted, and another 144,000 face an on-going threat of eviction. According to the group's filing, entire settlements have been destroyed and the police have terrorized and beaten residents who refuse to vacate their camps. In many cases, people in camps targeted for eviction are being denied food, clean water and medical care.
Said Jennifer Goldsmith and Laura Karr of the International Human Rights Law Clinic at American University Washington College of Law, “The Commission’s directive to the Haitian government to abide by international law provides an important impetus to the government to increase its efforts to craft long-term housing solutions that are consistent with international human rights standards.”
“The Commission’s directive is a small but significant victory for Haitian people in stopping forced evictions,” said BAI managing attorney Mario Joseph. “We hope that the Government of Haiti will adopt these comprehensive recommendations immediately and issue a moratorium on forced evictions.”