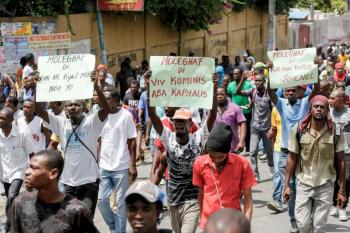 Thousands of people have taken to the streets in Haiti calling for President Jovenel Moise to step down.

It's the latest of ongoing protests against Moise that began two months ago.

It comes on the day Moise officially reintroduced the national army, some 22 years after it was disbanded, and a week after an investigation revealed millions of dollars in earthquake relief had been stolen.