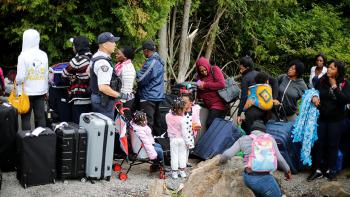 An RCMP officer announces to a group of asylum seekers that identified themselves as from Haiti that they will be crossing illegally into Canada as they wait in line to to enter at the U.S.-Canada border in Champlain, N.Y., Aug. 7, 2017. (Christinne Muschi/Reuters)

A sixth borough of New York City might just exist; it could be a realm called Limbo. Twenty thousand Haitians live throughout other neighbourhoods but in a state of temporariness, waiting every couple of years to see if the federal government will allow them to renew their temporary protective status—and stay in the United States—for a processing fee of US$495 per person.

In subway stations, a Brooklyn advocate named Herold Dasque distributes flyers asking New Yorkers to lobby government officials to extend the Haitian status America-wide, at least one more time. “You will have 50,000 Haitians who will try to go in hiding,” says Dasque about the consequences of terminating the designation. “They will not go to work, not go to church,” he says. “You don’t go outside.”

Dasque’s campaign didn’t sway the Department of Homeland Security. It announced in late November that it will end the temporary protective status for Haiti, though it will delay deportations until July 2019.

Since the U.S. first warned in May 2017 that it might end the protected status, thousands of asylum seekers, many of them Haitian, have headed for Canada. In 2018, even more are expected to follow, adding pressure to an already backlogged refugee processing system.

Canadian members of Parliament have already begun meeting face-to-face with Haitians and officials in New York, as well as in Florida, attempting to end illegal crossings into Canada—17,000 asylum claimants from around the world were intercepted by the RCMP this year.

Among the recipient cities and towns, Montreal converted its Olympic Stadium into an emergency shelter in August, and about two weeks before that the Canadian Forces set up tents in Cornwall, Ont. As Canada attempts to warn asylum seekers against going with the flow, 2018 may be the year Canada flips its metaphorical welcome mat.

“They have to be aware of the robust immigration law we have in Canada,” says MP Emmanuel Dubourg, a Quebecois Liberal who was born in Saint-Marc, Haiti, and moved to Canada at age 14. He recently travelled to New York where he spoke with city hall officials, held meetings at the Canadian consulate and did an interview with Radio Soleil, the local Haitian radio station. “The goal, it’s to inform them, to tell them what the consequences are if they cross the border illegally.” Canada welcomes immigrants, he tells them, but “it’s not a free ticket to cross the border like this.”

“I don’t even think people would go to that meeting,” says Jeffry House, a human rights lawyer in Toronto, about Ottawa’s outreach efforts. “The number of illegal people who would go to a library to hear some MPs talk about why it’s not a good idea to come—it doesn’t strike me as a crowd-pleaser.” In Montreal, Warren Creates, an immigration and refugee lawyer, also says the delegation won’t reverse the trend. “It’s not going to stop it; it’s not going to stem it; it’s not going to mitigate it,” says Creates. “They’re wise, these communities of people who are fearful. They’ve figured out where they need to go. They’ve figured out the path of least resistance.”

While the number of illegal border migrants is still relatively small, Canada’s refugee system is not equipped to process them. The Immigration and Refugee Board of Canada (IRB) predicts that if its backlog grows as anticipated, claimants arriving in 2021 could wait 11 years for hearings. Between February and October, 6,304 Haitian refugee claims were referred to the IRB and just 298 cases were concluded.

Creates says most migrants won’t start presenting themselves at ports of entry, aware they’d be turned away at those sites due to the Safe Third Country Agreement, which allows Canada to turn back an asylum seeker coming from the U.S. who fails to make a claim first in that country, but only if he or she arrives at an official port of entry. “What worries me most is that in darkness, and storms and winter months, people ill-equipped and not properly clothed . . . they’re being forced into a procedure that they know will allow them entry into Canada and have this fair chance, but at the same time they’re risking their health and their lives.”

The delegation to New York, Creates says, only embellishes the Liberal image of taking action. Haitians will not agree to present themselves at official border crossings, as they are not travelling for business or pleasure, but rather for a home more certain than Limbo.