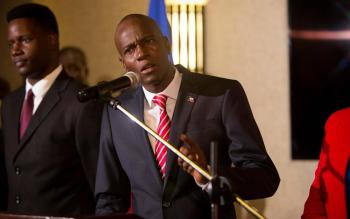 When Donald Trump allegedly referred to Haiti as a “shithole” country earlier this year, the US Ambassador was called in to explain the comments, but the Haitian government stopped short of any type of retaliation. But since last week, the government has been up in arms after a UN mission with a mandate to support the Haitian justice system went so far as to welcome a judicial inquiry into corruption allegations. The government has recalled its ambassador to the UN in response.

In November, a Senate commission released a 650-page report on Petrocaribe-related corruption. The report implicated top officials from previous administrations in inflating government contracts, funneling money to ghost companies, no-bid contracts for projects that were never finished, and a host of other financial crimes. Even current president Jovenel Moïse was named, allegedly overbilling the government on a $100,000 contract to install solar lamps back in 2013 when he was a relatively unknown businessman.

Moïse has rejected the allegations as politically motivated, as have others implicated. And rather than follow up on their colleague’s report, the Senate has worked to bury it.

On February 8, four civil society organizations released a statement condemning the efforts to obstruct further investigation into the allegations contained in the Petrocaribe dossier. The organizations noted that the Senate had blocked a vote on the report for four months and then, in a “clandestine” session conducted once the opposition had left the building, passed a resolution condemning the report as politically motivated and sending the dossier to the Superior Court of Accounts ― a governmental body that had already signed off on the contracts in question at the time they were awarded. The civil society organizations wrote that these actions “expose the cowardice” of the Senate, and their desire to bury the report.

Anticipating the Senate’s lack of action, a private citizen, Johnson Colin ― backed by lawyer and government critic André Michel ― filed multiple cases at the Port-au-Prince Court of First Instance on January 29 and February 20. (The original filing is available here.)

On February 25, the UN Mission for Justice Support in Haiti (MINUJUSTH) issued a press release welcoming “the assignment of investigating judges to pursue the Petrocaribe court cases filed by private citizens.” The mission noted that Haiti is ranked near the bottom of Transparency International’s corruption report.

“I welcome the initiative and the active role of Haitian citizens and civil society who are engaged in the fight against corruption and impunity. Their actions demonstrate that the population is standing up for accountability and justice,” said the Special Representative of the United Nations Secretary-General (SRSG) and Head of MINUJUSTH, Susan D. Page.

The UN also expressed its regret that no investigating judge had been assigned to two cases of alleged human rights violations on the part of the Haitian police; one in Lilavois on October 12, 2017 and one, the alleged summary execution of civilians, in Grand Ravine on November 13, 2017. (The Grand Ravine operation was planned in coordination with the UN mission).

The mandate of MINUJUSTH, which took over for the previous UN mission, MINUSTAH, this past October is to “help the Government of Haiti strengthen rule-of-law institutions, further develop and support the Haitian National Police and engage in human rights monitoring, reporting and analysis.”

Of course, as many observers have pointed out (including here on this blog), the UN has its own terrible track record in terms of avoiding accountability for its actions. The UN’s introduction of cholera has killed more than 10,000 and sickened a million while the UN continues to dodge legal accountability or properly fund eradication efforts. Hundreds, if not thousands, of cases of sexual exploitation and abuse involving UN personnel have been identified ― however in the overwhelming majority of those cases, the perpetrators were simply moved out of Haiti and avoided prosecution. How can the UN have the moral authority to call for justice in Haiti when the UN itself has yet to face justice for its crimes there?

Given its mandate to support anticorruption efforts and strengthen the judicial system, and its creation under Chapter 7 of the UN charter, the mission was within its rights to make those comments, argued university professor James Boyard.

The UN did not express an opinion on the content of the Petrocaribe dossier, and given the current state of Haiti’s judicial system, the likelihood of the current case leading to any meaningful accountability is slim. The statement posed little threat to those implicated in the dossier (who, if they believe they are innocent, should be welcoming an investigation into the allegations rather than letting the dossier be used by politicians for political reasons).

The first response to the UN statement came from Haitian foreign minister Antonio Rodrigue. Reuters reported that Rodrigue “said in a statement on Tuesday that Page had exceeded her authority and that her comments reflect an ‘attitude harmful to the political and institutional stability acquired during the past few years.’”

The Haitian government, rather than address the allegations in the Petrocaribe dossier, has doubled down on this response. “The country is fighting to defend its image,” President Moïse said. “People have to speak well of the country,” he added. (The Haitian government recently hired an international PR firm to help with “media relations services.”)

Moïse responded by recalling the Haitian ambassador to the UN and summoning Page to explain her comments. Page has since left the country to travel to New York ― a move the government characterized as punishment for her comments.

Last Friday, government spokesperson Lucien Jura told the press that Moïse had spoken with UN Secretary-General António Guterres, who Jura claimed distanced the UN from Page’s statement. But journalist Jacqueline Charles noted that she had been told Page’s travel had been scheduled for weeks. The UN has not provided any clarity on the situation.

Reuters put Page’s press release into the context of international bodies leading corruption fights throughout Latin America, and the pushback those efforts have faced:

The case is the latest example of governments across the Americas - including Guatemala and Honduras - chafing at criticisms by U.N. bodies, which have highlighted lackluster efforts to tackle corruption, human rights abuses or impunity.

Jocelyne Colas, the director general of the Episcopal Justice and Peace Commission (JILAP), told the press that the government’s response showed that they had no desire to “curb the phenomenon of corruption in the country.” Colas said: “There must be light in this case. We do not have the right to close our eyes.”

There is also a certain amount of hypocrisy in the reaction of the Moïse administration and their apparent nationalist response to the comments from the UN. As Haitian author Edwidge Danticat has noted, Moïse’s “two heavily contested election cycles are often touted as a [UN] success.” In other words, Moïse (and the ruling party to which he belongs), in many ways owe their own political success to the international actors they are now criticizing.

Since he assumed office last February, Moïse has seemingly been at odds with at least some members of the ever-influential international community in Haiti. The Miami Herald reported that in January, Moïse “irked the country’s foreign diplomatic corps when, according to several sources, he demanded that foreign donors support his campaign promises or take their aid elsewhere.”

The Inter-American Development Bank, one of Haiti’s largest donors, is providing financing for Moïse’s flagship government program ― his “Caravan for Change.” But Moïse has failed to secure public support for his controversial decision to reinstate the Haitian military. The UN ― which has spent more than a decade training and funding the Haitian police ― was publicly opposed to the decision.

Right now in Haiti, the money of foreign taxpayers, your money, is being wasted … Every year we receive $1.2 billion to $1.4 billion in aid, or more. However, it’s all consumed in a state of disorder that constitutes public international development aid.

It may be difficult to view the latest disagreement between Page and the Haitian government as anything other than a continuation of this conflict ― but it remains very much unclear to what extent there really is any conflict, or if both sides are simply posturing in order to save face in public.

Though the Moïse administration did not respond as forcefully as many had hoped to Trump’s comments about Haiti, the administration has been very outspoken about the revelation of the Oxfam sexual abuse scandal and what lessons should be learned about foreign aid more broadly. In a Washington Post opinion piece, Moïse wrote:

The general paradigm of aid and power in Haiti, as elsewhere in the developing world, is not a balanced one. Our government is often sidestepped by aid agencies that refuse oversight as they pursue their own development and humanitarian agendas in our country. The level and direction of aid, and its implementation, is controlled by donor forces with little or no input from Haiti’s government or other local stakeholders.

This is why the battle over the Petrocaribe dossier is so important. If the Moïse administration wants to be in the lead with donors, then the first step must be to clean house. It’s not just donors who are wary of the government ― recent surveyshave shown corruption to be high atop Haitian citizens’ list of priorities.

Unfortunately, the fallout from the UN statement appears to be having the opposite effect. The government has deftly deflected attention from the underlying corruption allegations, instead shifting focus to the intervention ― and nefarious practices ― of the international community. There is plenty there worthy of criticism, but the sins of one’s enemies do not absolve one’s own.

And it appears the reaction will have real implications on the ground. Last week, the Haitian government reportedly canceled its participation in a high-level retreat, coordinated by the UN, to address the ongoing cholera epidemic in Haiti. Moïse was scheduled to give the keynote address ― until the press release from Page. (The Haitian government has since said that the retreat was postponed.)

In all likelihood, the relationship between the UN and the Haitian government will be just fine. Both, in fact, depend upon the other for their successes. But both can use the situation to their advantage.

The public conflict allows the UN to garner some sympathy from the political opposition, which has long criticized the UN mission as an infringement upon Haiti’s sovereignty and for supporting the elite of the country (including the current administration). Moïse and his administration can point to their response as evidence of their standing up against the international forces that have taken advantage of Haiti for centuries ― all while ignoring the corruption allegations.

The UN may have no moral standing to question the Haitian justice system, but that doesn’t absolve the Haitian government. Unless, and until, corruption is seriously addressed in Haiti, the faulty aid paradigm that the Moïse administration has criticized will assuredly continue.