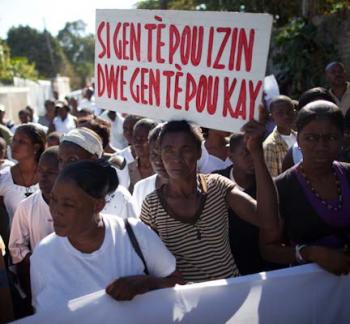 Sign reads, "If there is land for factories, there should be land for houses," photo Ben Depp

The following article was first published on the Haiti blog of the Rabble.ca news website, February 23, 2012.

A centerpiece of Canada's aid pronouncements for Haiti on the second anniversary of the earthquake is a $20 million project by the Canadian International Development Agency to resettle residents of the most visible camp of internally displaced people in Port au Prince, that of Champ de Mars, an historic public square located a stone's throw from the destroyed national palace.

The camp is a visual testament of the slow pace of housing and shelter construction since the earthquake. A recent Washington Post article said the Haitian government (and presumably its international backers) consider the camp an "embarrassment". Hence the priority on closing it down.

The announcement of the resettlement project by Minister of Intergovernmental Affairs Bev Oda on January 11 said that 5,000 families would be relocated, two Port au Prince neighbourhoods (unnamed) would be rebuilt, workers would be trained for the building work, and those operating artisanal businesses in the camp would receive additional funding to relocate. 1

The true measure of aid pronouncements in Haiti since January 12, 2010 is only revealed in often hard-to-obtain detail. In this case, what looks on paper like a shelter plan reveals itself upon examination as more like shantytown clearance.

For one, the program will build next to no new houses. It is centered on a rent subsidy scheme, $500 for one year per household. Those who own homes damaged beyond safe habitation will receive up to $1,500 for repairs, or in the case of a required demolition, $3,500 for the construction of a replacement ‘temporary' shelter. (Note that few among Port au Prince's vast population of poor people have the good fortune to own the dwelling in which they lay their head each evening.

For another, it's hard to imagine where camp residents will find a place to rent. According to the engineering survey of Port au Prince conducted in the months following the earthquake, nearly half of all the 400,000 buildings in the city are damaged beyond rehabilitation or require major structural repair.

Some 80,000 to 90,000 temporary shelters have been built since the earthquake, but not all of those are occupied by those who lost homes. Many house those who opted to abandon their previous shelter and move ‘up' into a temporary shelter. So all this leaves a huge gap between the pre versus post-earthquake housing supply.

Perhaps for this reason, the Champ de Mars clearance appears to be proceeding at a snail's pace. News reports one month after its announcement say 176 families have been relocated.

Maybe, over time, the first, pioneering recipients of rent subsidies will find places to rent. But what about those to presumably follow? The Haitian government has for months now targeted for relocation six camps, including Champ de Mars. There are currently 707 camps in the earthquake zone.

Researcher Phillip Wearne of the Haiti Support Group in the UK recently looked at UN agency figures on housing in an excellent article on the two year anniversary. He found that less than 5,000 homes have been built in the two years since the earthquake. Echoing that finding, former U.S. President Jimmy Carter told a reporter following a visit to Haiti in November, 2011 on behalf of Habitat For Humanity, "I'm not seeing any new homes for poor people being built"

On February 17, the Washington Post published an article by correspondent William Booth  looking at the state of housing and shelter in Haiti. It is one of the few, in-depth looks at the issue to be published in an international newspaper. Booth's main observation is that promised shelter assistance for displaced persons will hardly make a dent in the overall need. "The math does not work," he wrote.

Canada will spend $20 million to relocate the estimated 5,000 households in Champ de Mars. Throughout the earthquake zone, there are at least 250,000 households (one million people) in dire need of housing. This includes those in IDP camps, app. 125,000 households, and those who have moved back into damaged or destroyed homes.

Extrapolating the already-thin Canadian figures (what happens to poor people after one year of rent subsidy?), the Haitian government and international agencies would have to come up with $1.1 billion (Booth's article says $500 million) to shelter those in direst need. Haitian and international governments and agencies are not talking of anything approaching such an amount for housing.

Summing up anticipated housing and shelter relocation, Booth concludes, "Some camps will become ‘formalized' as permanent slums. The displaced will mostly have to fend for themselves."

And this does not take into account those among the 3 million people in the earthquake zone who did not lose their homes but were already living in harsh conditions.

Perhaps, it will be argued, rental subsidies to the poor will incite Port au Prince's land and home owners to repair or otherwise expand rental facilities. Is this, then, the ‘housing plan' for Haiti-a vast scheme to indirectly subsidize present and future landlords?

‘Not the government's responsibility to look after these people''

An article in the semi-daily Haitian newspaper Le Nouvelliste reports on a press conference  by the International Organization of Migration (IOM) on February 17 providing an update of the Champ de Mars clearance effort. The IOM is spearheading the work, in conjunction with the Haitian government.

Headlined, 'Clearing the victims of the 2010 earthquake from Champ de Mars,' the article says the government's aim is to return camp residents to their pre-earthquake living conditions, nothing more. It quotes Clément Bélizaire, representative of the Haitian government at the press conference, saying, "The government cannot look after these people over the long term. That is not its responsibility."

The article notes with scepticism that the Champ de Mars project comprises three distinct objectives, each very ambitious on its own-rental subsidies, repair or rebuilding of damaged homes and rebuilding of two (unnamed) neighbourhoods. It concludes, "This is pretty much to say that everyone's needs will be satisfied.

An important backdrop to the Champ de Mars project that cannot be ignored in its evaluation is the ongoing forced dislocations of survivor camp residents. According to UN and other human rights agencies, one in five camp residents is threatened with forced dislocation. The threats come from municipal governments, people claiming to own the land on which a given camp is situated, and sometimes the national government itself. The Haitian government has turned a blind eye to the forced dislocations, including ignoring appeals by Haitian and international human rights agencies to intervene and prevent them.

An article last month by veteran Haiti aid activist Mark Snyder of International Action Ties examines forced dislocations from a particularly important angle. Titled, ‘The Race to Zero: How Prioritizing Closure of IDP Camps Aids and Abets Illegal and Forcible Evictions of Haitians,' the article describes one case of forced dislocation last September, Camp Barbancourt 17 in central Port au Prince (this camp's story was also reported by Canadian writer and academic Justin Podur during his visit to Haiti at the time).

Snyder draws attention to the troubling complicity of the IOM in the expulsion of the Barbancourt 17 camp. He decries the emerging trend of a ‘race to zero survivor camps' on the part of Haitian and international agencies anxious to claim ‘progress' in closing camps, regardless of the humanitarian consequences for residents.

This ‘race to zero' mentality was reflected in statements by UN and other international agencies on the state of housing and shelter on the two year anniversary of the earthquake. Many claimed that the reduction of the number of claimed survivor camp residents from the high point of 1.5 million in the early summer of 2010 to 500,000 today represents significant progress. Most Canadian media outlets, including the CBC, reported this skewed interpretation of figures as good coin. 2

As we have seen earlier in this article, relatively few new houses have been built in the past two years in Haiti. The reduction of camp numbers is due in part to the phenomenon of people moving back into damaged homes, to which can be added those of crowding even further into undamaged buildings and moving out of the earthquake zone entirely.

It's time, above all, for the Haitian government and its international allies to launch the kind of super-ministry of housing that could oversee the massive, multi-year housing plan that Haitians rightfully expect and were led to believe would be well underway already.

Notes:
1. Other Canadian aid announcements on the two-year earthquake anniversary  included $20 million for maternal and child health care, to be directed to Haiti's existing health care providers; school construction; and further assistance to several small, existing agricultural development projects.
2. Similarly, the phenomenon of re-habitation of damaged homes has gone entirely unreported in Canadian and international media. The BARR Study of 2011 is the only substantive report on the phenomenon and it has been largely ignored, even dismissed in some aid circles as flawed.