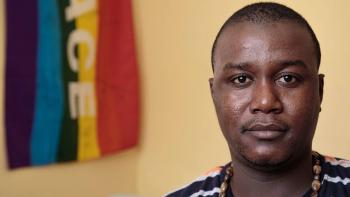 On Thursday, Haiti’s most prominent LGBTQ rights organization vowed to carry on. Kouraj, or Courage, spent Thanksgiving mourning the suspicious death of their president Charlot Jeudy in the Capital of Port-au-Prince on November 25.

Jeudy’s work campaigning for LGBTQ rights in Haiti, the poorest country in the Western Hemisphere, was world-renowned.

Kouraj is one of just a handful of LGBTQ rights organizations in Haiti, according to Frontline Defenders. As Jeudy and others faced death threats, Kouraj was forced to relocate three times.

Those threats were spurred not by deep-seeded anti-LGBTQ animus among Haitians, however, but by foreign interventionism, Kouraj reported.

After the massive earthquake in 2010, a flood of donations and aid workers arrived on the island 700 miles off the coast of Florida. But some of that aid came with another export, Kouraj leaders told PRI— homophobia.

“They can’t do this in their home countries, where human rights are respected,” Francois said. “So they come to underdeveloped countries where they make people believe homosexuality is something abominable.”

A common saying in Haiti is that Haitians are, “70 percent Catholic, 30 percent Protestant, and 100 percent Vodou.” The saying reflects a history of interventionism, where U.S., French, and other religiously-affiliated aid workers pour money and aid into the country but often attach it to doctrine. Haitian Vodouism, however, is LGBTQ-friendly.