Haiti’s maternal mortality rates among the highest. So why is this hospital closing? 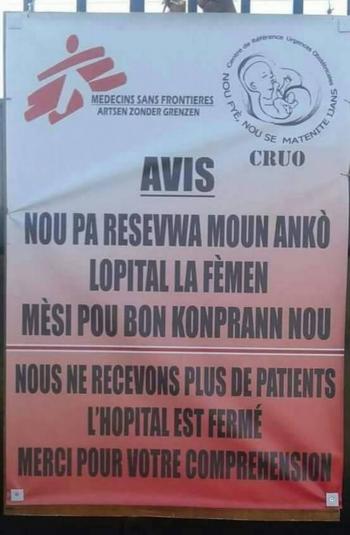 This sign on the door of the Doctors Without Borders (MSF) maternity hospital in Delmas 33 in Port-au-Prince informs patients of its closure. The hospital admitted its last patient on July 15.

In a country where more women die before, during and after childbirth than anywhere else in the Western Hemisphere, poor women in Haiti with high-risk pregnancies now have one less option for life-saving care.

The Geneva-based medical charity, Doctors Without Borders/Médecins Sans Frontières (MSF), has closed down its free, round-the-clock maternity hospital in Haiti’s capital at Delmas 33. The facility, called the Centre de Référence d’urgences obstétricales, or CRUO, was opened in the wake of Haiti’s catastrophic 2010 earthquake. It admitted its last expectant mother Sunday — three months ahead of its scheduled closure.

“It was a temporary structure that has a life span that already has been surpassed, and requires significant investments to turn it into a permanent, more long-term structure,” Michelle Chouinard, MSF’s head of mission, said about the prefabricated structure that was built from shipping containers. “It’s not MSF’s role to remain indefinitely.”

The hospital closure is the first of two for MSF. The organization launched them after many of Haiti’s healthcare facilities collapsed in the quake, and a deadly cholera epidemic hit 10 months later. The charity’s 122-bed trauma hospital in Tabarre, which receives a large number of head trauma cases and broken bones related to the country’s motorcycle culture, is scheduled to close permanently in June 2019.

But other medical facilities run by the charity will remain open.

“People are saying MSF is leaving. MSF is not leaving,” Chouinard said. She said the group’s 40-bed severe burn center, 24/7 sexual violence center, 24-hour emergency clinic in a Port-au-Prince slum and a facility in Port-à-Piment, which was opened after 2016’s Hurricane Matthew in southern Haiti, will all remain operational..

With the number of conflicts and other humanitarian crises increasing around the world, demands are up for the charity’s emergency medical aid, Chouinard said. Also, the situation in Haiti is not the same as it was in 2010, she noted, when the charity was in the midst of handing over some projects to the government when the quake forced it to put plans on hold.

“MSF does have standards of care for our patients,” she said, noting that running the maternity hospital, which admitted an average of 500 patients a month last year, is expensive. “We do believe that healthcare is important and should be free. Most of the times we work In areas where people can’t afford to pay for healthcare.”

In Haiti, that has meant not only providing life-saving care to mothers with complicated pregnancies and babies with low birth weights, but being on the front lines of the cholera epidemic. At cholera’s height, MSF was often the first to dispatch emergency response teams to far-flung reaches of the country being impacted by the deadly water-borne disease. In 2016, when a strike crippled the country’s public hospitals, the Tabarre facility was the only respite for those unable to afford private care. That year, alone, it treated 15,228 patients in the emergency room and performed 8,088 surgeries.

Despite the care, MSF has not been immune from criticism in Haiti, where non-governmental organizations, or NGOs, are often accused of undermining the government because of their ability to provide services for free and pay top dollars for staffers. That has led to a complicated — and sometimes contentious — relationship between governments and NGOs. It is especially so in Haiti where earlier this year President Jovenel Moïse, in the wake of the sexual misconduct scandal involving the staff of British charity Oxfam, singled out Doctors Without Borders.

In an interview with Reuters, Moïse called for an investigation of the medical charity saying “it had to repatriate about 17 people for misconduct which was not explained.”

A Doctors Without Borders spokesman at the time said it was unclear what Moïse was referring to. Chouinard, in an interview with the Miami Herald following the president’s comment, said MSF takes allegations of abuse and harassment “very seriously,” and over the years has developed policies to address such situations, but they declined to address the allegations directly.

Haitian leaders have long been harsh critics of NGOs, while also enjoying the comfort of knowing that they are fulfilling a need. But critics say the reliance on NGOs weakens governments, which often don’t consider the fact that funding often runs out and programs go-away.

In the case of Haiti, the end of MSF’s 12-year investment in battling Haiti’s childbirth crisis, and the eventual closing of the trauma hospital, couldn’t have come at a worse time. The country currently doesn’t have a functioning government after the resignation of its prime minister and his cabinet on Saturday following this month’s deadly fuel-hike riots.

The new government, when it is formed, will now have to figure out how to absorb MSF’s services and the costs while addressing Haiti’s dysfunctional healthcare system. Chouinard and others say MSF had long warned Haitian health ministry officials that the maternity and trauma hospitals were temporary.

“They had discussions with the ministry, and because of the weakness of the system, the ministry kept asking for a delay,“ said Dr. Claude Surena, former president of the Haitian Medical Association who was part of the health ministry’s team that led Haiti’s response after the quake

Surena said the closure of the maternity hospital, which treated pregnant women with eclampsia and pre-eclampsia and was the only health facility that specialized in expectant mothers with cholera, will have a big impact. The health ministry, he said, will need to find a way to gradually absorb such cases and improve healthcare delivery.

“We understand the limits of the ministry of health, but we have been trying to work with them to be able to hand over some of our equipment so that some of these services at CRUO can continue,” she said, noting that the aid group ended its cholera response program last year after others stepped in to help with the dwindling numbers.

Dr. Barth Green, co-founder of the medical NGO Project Medishare, said the closing of the Doctors Without Borders hospitals presents an immediate logistical challenge to the Haitian government and its health ministry. The ministry, he said, should consider more public/private partnerships, such as the one Project Medishare is working on with the Haitian nonprofit Fondation Bitar-Bitar-Mevs and the health ministry to construct a $25 million National Critical Care and Trauma Complex in Cité Soleil.

“These decisions by a historically important NGO ... present a wake-up call and a new opportunity to recreate and reboot the national strategy for healthcare,” said Green. “The best and most financially feasible option is transformation of its existing primary care system.”

According to the World Bank, Haiti spends less on healthcare per capita than its closest neighbors. The Dominican Republic spends $180 per capita; Cuba, $781; and the Latin American and Caribbean region overall, $336. Haiti spends just $13. Maternal and infant mortality rates are also five and three times, respectively, higher than the regional average, the bank said in a report it published last year while calling on Haiti’s government to increase healthcare spending.

With 359 deaths for every 100,000 pregnancies, according to the World Health Organization’s 2015 statistics, “Haiti remains the country in the Western Hemisphere with the highest maternal mortality,” Chouinard said.

This is not the first time that MSF planned to shut down projects in Haiti. Before the earthquake, the charity was in the process of handing over projects to the government. Then disaster struck, leaving health facilities — including its not-yet-rebuilt public hospital in Port-au-Prince — in shambles. In a single-day, MSF, without asking, raised $9 million for its Haiti emergency response. But officials also cautioned that the model wasn’t sustainable without government support.

“These are never easy decisions,” she said.