Henri Namphy: Coup leader and former president who said, ‘Haiti has only one voter – the army’ 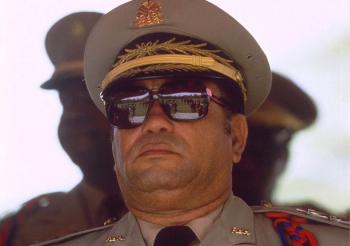 Lieutenant-general Henri Namphy, twice president and military ruler, of Haiti, was involved in three coups d’état, two of which he led. The third, by his own army in 1988, forced him into exile in the Dominican Republic, the Spanish-speaking country which French- and Creole-speaking Haiti shares the Caribbean island of Hispaniola with.

​Namphy, who has died aged 85, grabbed power in 1986 in a CIA-backed military coup on the back of a popular revolution against the chubby 34-year-old dictator Jean-Claude “Baby Doc” Duvalier, who had declared himself “president for life”.

When Duvalier fled the country on an American military transport plane in the face of growing street protests in the early hours of 7 February 1986, Namphy was a little-known name, even in Haiti.

But Namphy and fellow senior army officers, encouraged by the CIA, quickly ended that dream.

Briefly, indeed for little more than a day or two, Namphy was considered a hero for seeing off the Duvalier dynasty. But when he announced himself as the new president that same day – 7 February 1986 – he initiated a military rule which was soon described as “Duvalierism without Duvalier”.

Although he promised democracy, he cracked down on dissidents and his military rule continued through 1986 and 1987. He became known in the local French-Creole as “ti blanc” (Little White Man) because of his green eyes, chestnut hair and relatively light skin, in a land mainly made up of descendants of African slaves.

Starting in the town of Gonaïves followed by the northern town of Cap Haïtien, Haitians had begun taking to the streets against Baby Doc towards the end of 1985 armed with only their voices and palm fronds.

I was in Cap Haitien in January 1986 when poverty-stricken people emerged to shout anti-Duvalier slogans, unheard of for almost 30 years.

For a few days events in Haiti and possibility of revolution gripped the world’s attention. But on 28 January 1986, the tragedy of the seven astronauts on board Nasa’s Space Shuttle Challenger being killed shortly after takeoff knocked Haitians off the international news agenda, where they have largely remained, neglected, since.

In the Haitian capital, Port-au-Prince, just after midnight on 6 February 1986, it was leaked that the US was sending a military transport plane from Guantánamo Bay, Cuba, to Haiti to take Baby Doc into exile and prevent a bloody revolution. We newsmen and women, there because of the street protests, rushed to the airport. Usually deserted at that time of night, this time, there were a few soldiers guarding a gate with access to the tarmac as well as some Haitians who had gotten wind Duvalier might be leaving, via the local equivalent of “bush telegraph”.

Just after 2am on 7 February, an American Hercules C-141 landed at François Duvalier International Airport. At 2:13am, several flatbed lorries arrived at the tarmac gate, loaded with Gucci and Louis Vuitton luggage. Then came carloads of army officers, with Namphy prominent among them. And finally Baby Doc himself, driving a grey BMW while his wife Michèle nonchalantly puffed a cigarette inside the car window towards the bustling reporters and photographers.

It emerged later that Baby Doc and his wife both carried handguns and each had an Uzi submachine gun under their car seat; and that the dictator had emptied Haiti’s Central Bank before leaving. At 3:47am, the US plane carried them off to exile in France and by daylight millions of joyous Haitians danced in the streets.

Later that day, Lt Gen Namphy walked down the steps of the wedding-cake-style presidential palace, in clear sight of the celebrating Haitians and said he was now president, at the head of a five-man National Council of Government of three military officers and two civilians. Namphy’s sister-in-law, the Canadian journalist Elizabeth Abbott, was as stunned as anyone. Her husband was Joe Namphy, who had headed the Haitian Football Federation when the team almost-miraculously qualified for the World Cup finals in West Germany in 1974.

Henri Christophe Namphy was born on 2 November 1932 in the rural village of Grande-Rivière-du-Nord, on the outskirts of Cap-Haïtien, Haiti’s second city. Without a father present – not unusual in Haiti at the time, or even now – he, his brothers and sisters were raised by their mother. Known locally as Mammy Jeanne, she ran a small stall selling general goods.

She sent her children south to Roman Catholic primary and secondary schools in Port-au-Prince while she moved to New York as a nurse’s assistant to earn and save some money.

Henri went on to the Haitian Military Academy, the start of a career which would see him rise through the ranks under the dictator François Duvalier and later his son Jean-Claude. In 1981-82, Namphy helped put down an attempt by a group of 40 or so Haitian exiles from Florida to invade Haiti and overthrow Baby Doc. Duvalier was impressed by Namphy’s actions.

Despite his reputation as a womaniser and a serious rum and Scotch swigger, Namphy was promoted to chief-of-staff of the 7,000-strong Haitian army in 1984 – although it was not the army but the Macoute militia who ruled the roost in the streets. Mostly uneducated and often illiterate – like 85 per cent of the population at the time – the Macoute were known for their straw hats, sunglasses, machetes, ancient rifles and ruthlessness.

After Baby Doc fled on 7 February 1986, and Namphy took over, he ruled with an iron fist, Duvalier-style, with the Macoute continuing to do his dirty work, through 1986 and 1987.

In November 1987, however, as the Reagan administration called for democracy, he held a general election which ended up in bloodshed and no change in leadership.

It appeared that Namphy had called the election as a show for his people – and for the US – but clearly had no intention of relinquishing power.

We foreign journalists were at a main polling station in Port-au-Prince on Sunday 29 November 1987, when groups of tontons macoute and several soldiers stormed the station, shooting or machete-hacking everyone in sight. They killed 34 voters or ballot officials and a journalist from the neighbouring Dominican Republic. Many more were wounded in what became known as Haiti’s Bloody Sunday.

In January 1988, under popular and international pressure, Namphy set up another general election, with the civilian Leslie Manigat as something of a frontman candidate pushed by the military. Manigat won, but the populace – and the world – considered the election a fraudulent farce and less than 10 percent turned out to vote.

Manigat lasted only 133 days in the presidential palace. He made the mistake of dismissing Namphy as army commander so the latter ousted him in a military coup on 20 June 1988, and declared himself president again. Three months later, Namphy himself was overthrown in a coup by young army officers and was sent into exile in the neighbouring Dominican Republic, where he would live until his death. His Port-au-Prince home, as well as that of his mother, were soon trashed and looted.

As Reuters correspondent for Latin America and the Caribbean, my stringer in Haiti happened to be Namphy’s sister-in-law Elizabeth Abbott. In her definitive book Haiti: The Duvaliers and their Legacy (1988), she wrote that her former brother-in-law was “suddenly infamous as a brutal dictator”.

She added: “In the chapters dealing with him, I wrestled with the temptation to overstate the case and prove my impartiality by painting Namphy as a monster of deceit and calculation. In fact, the evidence points to an impulsive man overwhelmed by the Duvalier legacy and by the pressures of the Haitian presidency, who metamorphosed into the tyrant who was complicit in the Bloody Sunday massacre.” She quoted Namphy as once saying, with a laugh: “Haiti has only one voter. The army.”

Namphy died in the Dominican Republic, where he had lived for 30 years, just across the border from Haiti. He is survived by his wife Altagracia Marte and his daughters Martine and Melissa from previous marriages.