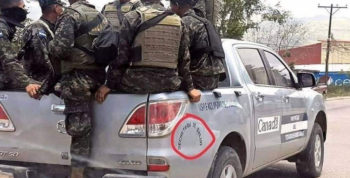 Activists have raised concerns after a photo of Honduran soldiers riding in a truck with a Canada logo on it began circulating on social media.

By June 27, Proceso reported (in Spanish), "The publication provoked a reaction from the Canadian ambassador in Honduras, James K. Hill, who issued a statement in which he stated that his government 'is deeply concerned about the recent images circulating in Honduras showing vehicles with the Canadian logo, transporting military personnel'."

The photo was also reported on by publications Tiempo, La Prensa, and Criterio.

The Honduran Minister of Health Alba Consuelo Flores has now explained that the truck was being used to transport soldiers to provide security to the health teams that were doing their work in areas where there is conflict.

Minister Flores has stated (in Spanish), "We carried out the investigation in the departmental sanitary region of Colón and they told us that the vehicles were used to transfer the soldiers who accompany the contingents who move through neighborhoods and some dangerous places to clean up the dengue."

And she has noted, "We continue to do a more thorough investigation, we have sent explanations and apologies to the Canadian embassy."

Criterio reports (in Spanish), "The uniformed were transferred in a sector of Tegucigalpa where a repression was made against demonstrators who protested, demanding the exit of the power of the head of government, Juan Hernández."

The Canadian ambassador's statement says, "These vehicles were only intended to allow employees of the Ministry of Health to reach remote populations and improve access to health services by vulnerable populations."

The ambassador's sternly worded statement adds, "We have insisted that immediate steps be taken to ensure that this unacceptable use of development cooperation resources provided by Canada does not happen again."

Canadian journalist Sandra Cuffe reports in this Al Jazeera article that June 29 marked the tenth anniversary of the coup in that country "that set in motion a decade of political crises, violence, mass protests, militarisation and repression."

That article adds, "Violence spiked after the coup, and so did murders of social movement activists, indigenous community leaders, and journalists."

Toronto-based academic Tyler Shipley, the author of Ottawa and Empire: Canada and the Military Coup in Honduras, has stated, "The primary agents of the coup in Honduras were the oligarchy (a group of super rich families that dominate Honduran economic and political life) and the military."

He comments, "Canada prefers a government like the one that took over after the coup, which cracked down on popular protest, lifted the moratorium [on mining], and invited Canadian mining companies to help write the new mining code."

Montreal-based author-activist Yves Engler has noted, "From 1996-2006 Canadian companies were the world's second-biggest investors in Honduras, trailing only U.S. corporations in levels of foreign investment."

And Nobel Peace Prize winner Jody Williams, who visited Honduras with the Ottawa-based Nobel Women's Initiative in 2012, has also commented on the impact of Canadian mining interests in Honduras.

She wrote in the Ottawa Citizen that, "In creating this new [mining] law, the Honduran government has bent over backwards to meet the needs of Canadian and other mining companies, but has carried out almost no consultations with Honduran civil society and community organizations."

The current situation in Honduras

The political situation is becoming increasingly tense in Honduras.

On June 28, the Peace Brigades International-Honduras Project shared this statement by the United Nations High Commissioner for Human Rights.

That statement notes, "Since 27 May, protests took place in at least 14 departments of Honduras."

It adds, "To date, the UN Human Rights Office in Honduras is investigating the death of four people, including three adults and one child. Three of them were shot dead, and the fourth died as a result of a blade injury."

And it highlights, "Another 78 people, including journalists and human rights defenders, have reportedly been injured by the security forces in the context of the protests."

PBI-Honduras accompanies six human rights organizations in Honduras -- including COPINH (which was led by Berta Cáceres who was assassinated in March 2016 over her opposition to a hydroelectric dam), C-LIBRE (an organization that defends and promotes freedom of expression) and ARCOÍRIS (a group that works to defend and promote the human rights of the LGBT community) -- as well as journalist Dina Meza.