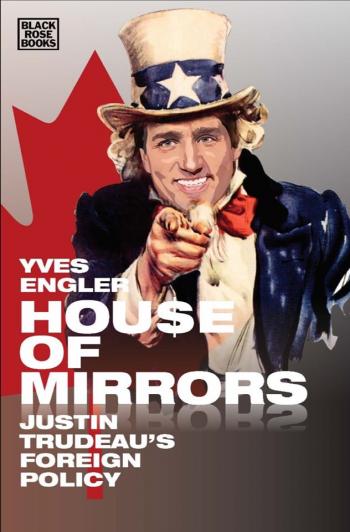 Some book covers are better than others, and that of Yves Engler’s House of Mirrors is beautifully expressive of the contents of his latest work. It shows a very friendly face and happy smiling Justin Trudeau in an iconic pose that says it all: America first.

This is Engler’s eleventh book exposing the downside of Canadian politics. It covers two main themes, the obvious first one is that of Canada’s involvement in the U.S. imperial-hegemonic demands around the world.

The second, more domestic, is that the Liberal’s and Conservatives, Canada’s two main parties, are essentially the same thing when it comes to foreign policy. Whereas the Conservatives are much more aggressive with their terminology while the Trudeau Liberals couch their words in a fancier more humanistic sounding language, the end results are the same: following the U.S. corporate-industrial-military complex and in certain cases being ahead of that curve.

With that as its underlying theme, Engler covers many topics concerning the Trudeau Liberals. The first long section deals with “The Canadian Monroe Policy” discussing how Canada fits into U.S. initiatives throughout Latin America with the overthrow, attempted overthrows, and manipulations of various organizations (OAS) in order to control the western hemisphere.

While paralleling U.S. interests, in terms of Venezuela, Canada, under Chrystia Freeland’ tutelage, has taken a leading interest with its support of the Lima Group (all sycophantic governments to U.S. corporate interests) against Venezuela.

A long essay on the Middle East, “Loving Monarchies, Hating Palestinians” discusses how Canada relates to the Arab countries, Israel, and the Palestinians. An earlier chapter, “The Sun Never Sets on the Canadian Military”, ties in with this chapter in exploring the numerous military sales and security contacts with Middle Eastern countries.

Large orders of military materials are sent to the likes of Saudi Arabia in support of its war on Yemen. Much information and technological information for security is exchanged between Canada and Israel (fun fact: Canada developed apartheid long before South Africa and Israel). The official position for Palestine is the stillborn two-state peace process while the actual position is more one of asking why the Palestinians do not acquiesce to Israeli demands.

Many other important topics are presented: around the world from China and North Korea through to Freeland’s favorite bogeyman, Russia, and on into Africa (military and mining interests); around the world from its domestic carbon dioxide/environmental policies; another hit on Canada’s mining interests in particular with South America; and the language of “Judge What I Say, Not What I Do”.

It is interesting how often Chrystia Freeland’s name rises in connection with Trudeau’s foreign policy. She is foremost in using the platitude about “international order based on rules” and the “rule of laws”. Whatever the foreign policy, as Foreign Affairs Minister and now as Deputy Prime Minister (a conveniently invented position), she carries considerable sway concerning Russia, Ukraine, Venezuela, Syria and other global hotspots (coronavirus notwithstanding). She inverts the colonial role, making Canada a victim rather than a colonizer and exploiter, “Canada has never been an imperialist power…we’ve been the colony.”

In his conclusion, Engler reprises comments about Canadian banks, the mining industry, Russia, Israel, Iran, the military, and business in general. He summarizes, “corporate Canada is highly international” with “segments…tied to extreme capitalism.” Extreme capitalism being capitalism dominated by and supported by the military-industrial complex with assistance from the financial community and the mainstream media.

As with all of Yves Engler’s books, House of Mirrors is tightly written, with little philosophizing, allowing the information to speak for itself, information that is highly notated and well referenced. The smiling man on the cover, Justin Trudeau, is essentially another true believer in an oligarchic world order (along with Ms. Freeland) supported by an international array of corporate and military liaisons.

Jim Miles is a Canadian educator and a regular contributor/columnist of opinion pieces and book reviews to Palestine Chronicles.  His interest in this topic stems originally from an environmental perspective, which encompasses the militarization and economic subjugation of the global community and its commodification by corporate governance and by the American government.