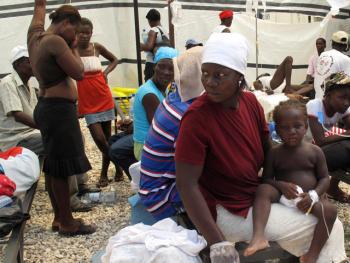 Human Rights Watch has issued a troubling study on the conditions for women and girls in post-earthquake Haiti. The 78-page report titled Nobody Remembers Us looks at the conditions of life for women and girls in Haiti since January 12, 2010. It was published on August 30, 2011. (The full report is available below in pdf). Disponible en français ici.

In a Los Angles Times article reporting on the study, Terry Wilkinson writes, “Nearly 20 months after Haiti’s devastating earthquake, women and girls have been badly neglected in recovery efforts, subjected to sexual violence and left without access to obstetric care even as they give birth to scores of babies in squalid tent cities, human rights activists say.”

Among the findings of the report are the following:

* At the time of the earthquake, there were app. 63,000 pregnant women and 114,000 lactating mothers among the 3 million people directly affected.
* Half of the women giving birth are doing so without medical assistance, often in unsafe and unsanitary conditions.
* Based on the study’s interviews, many women survivors in the camps are engaging in sex to obtain food or other basic necessities. The study uses the term “survival sex” to describe this reality.
* Teenagers in the survivor camps are particularly vulnerable to sexual violence or to unplanned pregnancy due to the absence of security and the weakening of traditional forms of family and societal protection.
* An October, 2010 study cited in the report found a pregnancy rate of 12 percent in the camps, three times the average urban rate prior to the earthquake. Two thirds of those pregnancies were unplanned and unwanted.
* Many women and girls told Human Rights Watch researchers that there is no family planning information in the camps where they reside.

"It is inconceivable that, 18 months after the quake, with so much money pledged … that women and girls are giving birth in muddy tents," Amanda Klasing, the report's main author and a fellow in the group's women's rights division, told the LA Times in a telephone interview from Port-au-Prince.

The report notes an October, 2010 study that reported only 20 percent of the app. 1,300 camps of displaced persons existing at that time had any sort of health facility on site. Today, the number of camps is 1,000, but medical services in them are equally scarce.

The report explains, “of $5.3 billion pledged by international donors after the quake, $258 million was dedicated to healthcare — of which only $118.4 million has been disbursed.” These figures describe the spending of international governments and UN agencies; figures for NGO’s delivering health care are in a different category of aid funding and are much higher. What the low figures reveal is how little aid funding has been directed to Haiti’s enfeebled public health care system, and how little that system figures into reconstruction planning. An essay in Dr. Paul Farmer’s recently-published Haiti After The Earthquake describes the serious consequences of this for Haiti’s largest public hospital, the General Hospital in Port au Prince.

The Executive Director of Human Rights Watch, Ken Roth, was interviewed on CBC Radio One’s As It Happens on August 30, the day the report was published. It was the lead story that day on AIH.

Unfortunately, the interview focused on one aspect of the Human Rights Watch report, namely, the phenomenon that many women, including pregnant women, are not accessing free medical care potentially available to them because they cannot afford the cost of transportation. The listener is left with impression that if only the transportation issue were solved, the medical crisis could be greatly alleviated. But the HRW report makes clear that medical services overall are seriously lacking in Haiti. Neither Mr. Roth nor the CBC interviewer explained this important nuance. You can listen to the interview here.

The report is sweeping in its scope, notably in touching on the years 2004-2006. This was the two-year period of foreign-appointed governance following the overthrow of elected government in February, 2004 by Haitian paramilitaries enjoying essential backing from the U.S., Canada and Europe. During this time, every national and local institution was weakened or shattered.

The report makes troubling revelations of the consequences for women during this time, including:

* USAID wrote in a 2008 report that the most fundamental determinants of poor health for women in Haiti were “extreme poverty, poor governance, societal collapse , infrastructural insufficiency and food insecurity.” This is, unwittingly, an apt description of the consequences of the 2004 coup.
* During 2005-06, less than 25 percent of births took place in a health facility.
* The maternal death rate during these same two years rose to 630 per 100,000 live births, compared to 523 during the years 1993 to 2000.
* As documented by the 2006 Kolbe/Hudson report, “widespread and systematic rape and other sexual violence against girls” marked the 2004-06 period.

In the interview on As It Happens, Ken Roth said that, “Canada is the foremost donor when it comes to maternal health care (in Haiti).” That is doubtful. The largest providers of medical care for women in Haiti, in association with the Ministry of Public Health, are Partners In Health, the Government of Cuba and Doctors Without Borders.

But Mr. Roth’s assertion is a good occasion for Canadians to inquire of its government: what is it, exactly, that you are doing for maternal health in Haiti? Your brief, one page reference to the subject on CIDA’s website reads like public relations, with no reference to existing programs nor any dollar figures.

On a final note, the interview with Human Rights Watch on As It Happens was a rare story on Haiti on CBC, notwithstanding the wave of studies, news articles and statements by human rights organizations in recent months that are documenting serious concerns about the post-earthquake relief and reconstruction effort in Haiti. See the “Human Rights Reports” page of the website of the Canada Haiti Action Network. The report of the recently-returned Canadian Delegation to Haiti has drawn little interest from the CBC or print media in Canada.

This article was published in the September 21, 2011 edition of the weekly Haiti Liberté. Roger Annis is a coordinator of the Canada Haiti Action Network in Vancouver and can be reached at rogerannis(at)hotmail.com.

PORT-AU-PRINCE, Haiti-- Fourteen-day-old Alexandro Joseph has never seen a doctor and 7-month-old Lovemika Belzi has suffered from diarrhea since the day she was born. In the sprawling camps that continue to dot this broken capital after last year’s devastating earthquake, health and human rights officials warn of an another crisis: an explosion of tent babies.

“The camps are not an appropriate place for delivery and not for a newborn,’’ said Olivia Gayraud, health and nutrition manager for Save the Children’s Port-au-Prince field office, which works with pregnant women in five camps. “You have win, rain, mosquitoes and cholera. The conditions of the life of these families with newborns are very difficult. It can be a disaster.’’

Even before Haiti’s killer January 2010 earthquake, more women died before, during and after childbirth — and more babies died before their fifth birthday — than anywhere in the Americas.

Twenty months after the disaster, the crisis has triggered a breakdown of Haiti’s social fabric and made an already vulnerable population of girls and women even more desperate amid a population spike in the tent cities. “There is usually a (pregnancy) peak after carnival,’’ Gayraud said, referring to the pre-Lenten debauchery. “It seems though that we are now always in a peak.’’

Haiti’s tent baby phenomenon comes as the country continues to struggle to rebuild, and as the nearly 600,000 Haitians still living in hundreds of squalid camps in quake-ravaged communities see the avalanche of medical assistance from foreign doctors and nongovernmental organizations disappear.

“We have NGOs telling us, we are packing up and leaving at the end of this month,’’ said Emmanuel Schneider, spokeswoman for the U.N. Office for the Coordination of Humanitarian Affairs, who blames a lack of funding for the departures. “Of the $300 million consolidated appeal the U.N. system is requesting to cover humanitarian needs, only 52 percent has been funded.’’

The lack of funding means less access to prenatal and maternal healthcare in a country that was already struggling to get women to deliver in hospitals instead of at home, said Sylvain Groulx, Haiti’s chief of mission for Doctors Without Borders, which runs a maternity hospital for high-risk pregnancies in Delmas 33.

“Haiti has been suffering in terms of health services for many, many years,’’ he said. “The lack of services has been compounded by the earthquake, especially for people living in Port-au-Prince, Carrefour and Leogane.’’

Population explosions after a disaster are nothing new. But in a country already rattled by a collapsed health system, cholera epidemic and now sordid conditions in congested camps, experts say they are worried about the impact. Adding to the concerns are conditions under which the pregnancies are occurring: insecurity and rapes in the camps despite increased U.N. peacekeeper patrols, lack of education and medical services, and desperation among girls, some as young as 13.

“There is a lot of transactional sex going on as a coping mechanism for young girls to survive poverty, to address some of their needs,’’ said Dr. Henia Dakkak of the United Nations Population Fund, which found that pregnancy in Haiti’s camps after the quake were three times higher than in urban areas. “It’s a concern for all of us." And that includes the camp residents, too.

“A lot of parents have just given up,’’ said Rose Mona St. Fleur, 33, a camp resident and head of a women’s group. St. Fleur said her camp near the international airport doesn’t have a problem with rape but it has seen an “explosion’’ in teenage pregnancy. “After the quake, you see all of the young girls, living by themselves in their own tents, and finding pleasure in the company of young men,’’ she said. “The parents can no longer control them or say anything. As soon as you see a young lady living by herself under a tent, it’s only a matter of time before she ends up with an unplanned pregnancy.’’

On Tuesday, Human Rights Watch will release a 78-page report detailing the vulnerability of girls and women in camps. Interviews showed how gaps in access to available healthcare services are failing to prevent maternal and infant deaths, and how young girls and women are giving birth on mud floors, in alleys and without medical help. The organization is calling on the Haitian government and the international community to do more to protect women and girls.

“Despite gains made due to free healthcare services, the government and international donors have not addressed critical gaps in access to health services or addressed conditions that may give rise to maternal and infant deaths,” said Kenneth Roth, the organization’s executive director.

On the lawn of the prime minister’s quake-ravaged office building, new mother Christa Oviles recalls how she gave birth on the muddy floor after two days of labor. With no doctor or a nurse available in the camp, she relied on friends who willed her to push. She finally delivered Alexandro on Aug. 15. But when she couldn’t deliver the after birth, she was rushed to a hospital across town. These days, the baby spends most of his time inside, Oviles says, his body constantly attacked by mosquitoes.

In the tent, Oviles small bed is in one corner and a charcoal stove a few feet away. Her only other possessions — clothes — are wrapped in sheets against the sides. “This is no place for a baby,’’ she said.