The humble toilet is bringing health and hope to Haiti 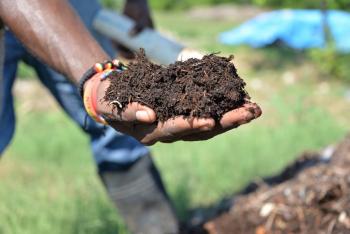 Compost produced at the end of the 9-month process

There was a time when Haiti was known as "the Pearl of the Antilles" for its fertile, beautiful land. Sadly, that is no longer the case. While it is still beautiful, much of the island has been deforested, the soil has been degraded, and its citizens suffer from endemic poverty. It has the highest childhood diarrhea mortality rate in the world, one of the worst cholera epidemics in modern history, and does not have enough food to feed its population. Annual hurricanes and occasional earthquakes make the situation worse. To top it off, Haiti was just named the most vulnerable nation in the world to climate change.

Haiti's situation is deeply complex, making it a challenge for charities and NGOs to have a lasting effect. Monetary handouts offer temporary relief, but what Haitians need and want is what every other person in the world wants -- a job, a safe and clean space in which to live, a healthy family, and a sense of dignity.

Enter SOIL, an organization founded in 2006 that is managing to offer all of these benefits to Haitians with an astonishingly simple solution -- the installation of a toilet in their homes. But this isn't just any toilet: it is a dry, waterless toilet, also known as container-based sanitation (CBS), that allows for human waste to be collected hygienically in sealable, removable containers, without relying on an expensive urban sewer system.

Participating families pay a small monthly fee (US$3-4) in exchange for toilet installation, maintenance, and weekly waste pickups. The waste is diverted into a bucket and the family adds a carbon cover layer made from sugarcane bagasse and crushed peanut shells to keep flies at bay and odors down. Once a week, SOIL's employees drive three-wheeled motorcycles along the narrow mountain roads to collect the waste buckets and deliver them to a central depot, where they're trucked out to the countryside for composting.

The composting process takes nine months, during which all pathogens are killed and the final result is rich organic soil that is bagged and sold to gardeners, farmers, larger companies growing plantains, beans, and mangoes, and groups doing targeted reforestation across the island. Various studies have found it to be a powerful natural fertilizer, boosting crop yields by as much as 400 percent in the case of green peppers.

Last week I spoke with Natalie Miller, SOIL's communications and development associate, and Wisner Jean Louis, director of human resources. Both were in the UK to collect a ￡25,000 Spring Prize award, in recognition of SOIL's work toward social and environmental regeneration.

Miller, who bubbles with enthusiasm about her work and delivers facts at dizzying speed, referred to SOIL as a rare success story, in light of so many other charities' struggles to effect lasting change in Haiti. She explained that SOIL's first attempt to build public toilets failed, despite communities having identified the need and saying they would maintain them. She told me:

"Just as would happen in Minnesota, where I'm from, or New York or London, people don't want to manage a public toilet for free, especially people who live in some of the most vulnerable, resource-poor communities in the world. They don't actually have more time to do that because they're working so much harder to help their families survive."

Fortunately SOIL did not give up, but reassessed where the real need lay -- in building toilets in people's homes. Since then, it has provided sanitation services to more than 6,000 people, made over 250 metric tons of compost, and employed 92 Haitians. Currently, it composts 40 metric tons of human waste every month, and that's set to grow. Thanks to the award from Lush, SOIL will be able to expand its composting facilities and further its research and development work.

I came away from the interview feeling amazed at the idea that something as humble as a toilet can combat cholera, create employment, boost crop yields to feed a hungry population, sequester carbon, and increase resilience to climate change by allowing the ground to retain more water during periods of drought and stay stable in times of flooding. It all makes sense, of course, that these things are interrelated, but it's such a beautifully simple solution to a problem that can appear extremely complicated.

As Miller and Jean Louis told me, their work is about returning to technology that humans have used for thousands of years. "Since water and energy become so cheap and accessible, we went a little crazy with flush toilets," Miller said with a laugh. Container-based sanitation, by contrast, makes much more sense in dense urban settings like Haiti, and prove Miller's words: "Human poop is where it's at!"