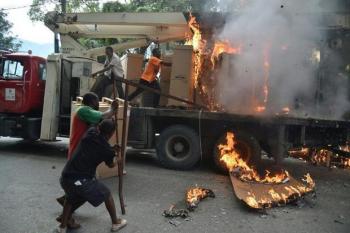 People try to carry refrigerators off a truck, that was set on fire by demonstrators HECTOR RETAMAL, AFP

Hundreds of Haitian opposition activists took to the streets of Port-au-Prince on Saturday to protest the army's remobilization and government corruption.

While there were no immediate reports of injuries, protesters burned tires, blocked roads and set fire to a truck carrying refrigerators. Some banged on percussion instruments.

"We don't want this army of thieves. We need an army that brings us security... They want to kill all of us poor people," said Robert Nossant, who lives in one of the capital's impoverished neighborhoods.

As with many other protesters, Nossant was demonstrating against a police operation that took place Monday in the Grand Ravine neighborhood.

Responding to growing anger from residents following the operation, a justice of the peace was dispatched to the scene Thursday and reported finding the corpses of nine civilians.

"(President) Jovenel Moise is establishing a partisan army, an army of torturers. But remobilizing the army should be part of a national debate," said Andre Michel, a lawyer who leads an opposition movement.

"This army should not have been established in a unilateral way like this. That's why we are against it."

Demobilized in 1995 due to its participation in numerous reprisals and coups d'etat, Haiti's armed forces were re-established in 2015 at the prompting of then-president Michel Martelly, and 150 soldiers were trained in Ecuador.

On Friday, Moise officially remobilized the army by naming an interim chief of staff of the armed forces tasked with forming the military's upper echelons of command.