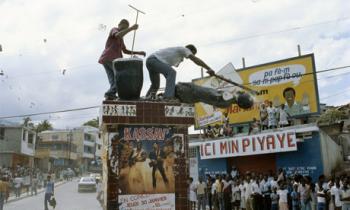 Protest during 1986 uprising against Duvalier tyranny

January 17, 2011-Port-au-Prince and Boston- Today, the Institute for Justice & Democracy in Haiti (IJDH) and the Bureau des Avocats Internationaux (BAI) call on the Government of the Republic of Haiti to comply with Haitian law and arrest ex-President Jean-Claude Duvalier, who returned to Haiti on a commercial flight yesterday.

IJDH and the BAI note that the extensive legal documentation of Mr. Duvalier’s crimes includes:

A July 3, 2009 order from the First Court of Public Law, of the Federal Court of Switzerland, which notes that the Haitian government had informed it of current criminal proceedings against Mr. Duvalier as late as June 2008;
The Decision of the U.S. District Court for the Southern District of Florida, Jean-Juste v. Duvalier, No. 86-0459, dated January 8, 1988, finding Mr. Duvalier liable for over $500,000,000 for his misappropriation of public monies for his personal use; and
An extensive accounting of Mr. Duvalier’s misappropriation of public funds conducted for the Haitian government by a U.S. accounting firm between 1986 and 1990, establishing the theft of over $300,000,000 U.S.D. of public funds.
This legal documentation is supplemented by an extensive public record of Mr. Duvalier’s human rights violations, including the torture and disappearances of political dissidents at the Fort Dimanche prison and other crimes committed by organizations under his control, including the Armed Forces of Haiti and the Volunteers for National Security (Tontons Macoutes).

Mr. Duvalier is not protected against prosecution by any statutes of limitations. According to Article 466 of the Haitian Code of Criminal Procedure, the proceedings for misappropriation of funds are not proscribed because of the continuing prosecution of the case from 1986 to 2008. The political killings and torture are not proscribed because they are crimes against humanity, which are imprescriptible under international law.

The BAI and IJDH believe that if there are not any arrest warrants outstanding against Mr. Duvalier, that the information available in existing legal proceedings and Mr. Duvalier’s 25-year flight from Haitian justice clearly justify the immediate issuance and execution of an arrest warrant.

The BAI and IJDH offer their assistance, including their extensive documentation of Mr. Duvalier’s crimes, to Haitian authorities conducting a serious investigation.