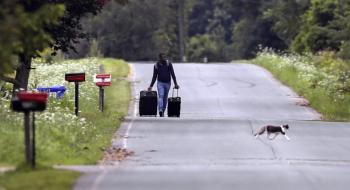 A Haitian man heads toward an unofficial border station between New York and Quebec in August. On Wednesday, Canada's immigration minister warned that Canada's asylum program is "not for everyone."  (CHARLES KRUPA / THE ASSOCIATED PRESS FILE PHOTO)

With another influx of Haitian refugees from the U.S. in sight, Immigration Minister Ahmed Hussen is warning that Canada is not a viable option for them — and data released Wednesday by Ottawa backs him up on that.

The federal government has been on high alert since the Trump administration announced this week it will end its temporary residency permit program that has allowed 60,000 Haitians to stay in the United States. Haitian migrants have until July 2019 to return to their country.

On Wednesday, the Immigration and Refugee Board of Canada released data on the outcomes of the 1,314 asylum decisions made involving those who crossed unguarded points along the border with the United States from February to October. Of those, 941 were accepted and 373 rejected. Some other 258 claims were either abandoned or withdrawn. Almost 12,900 of the 14,470 refugee claims are still pending.

Haitians, who account for 6,304 or 44 per cent of those claims, were among those with the lowest acceptance rate, at 17 per cent. Only 29 of the 168 Haitian border-crossers were granted asylum after a hearing as of Oct. 31.

On Wednesday, Hussen cited the Haitians’ acceptance rate as 10 per cent, using the number of cases “finalized” as the base which included the 130 additional claims that were either abandoned or withdrawn from the system, instead of just the total positive and negative decisions rendered by a refugee judge.

“Coming to Canada first of all has to be done through regular channels, and secondly the asylum system is only for people who are in genuine need of protection,” Hussen told reporters. “It’s not for everyone.”

Critics question the timing of the release of the data as well as the refugee board collection of data by the means asylum-seekers arrived.

“It’s questionable why they are pulling out these claims based on where and how they entered Canada,” said Janet Dench of the Canadian Council for Refugees. “The information is not relevant to their claims.”

Since December, on the eve of President Donald Trump’s travel bans against immigrants and refugees, migrants in the U.S. started trickling into Canada through unguarded points along the land border in Manitoba and Quebec to circumvent a bilateral pact that limits refugees to seeking asylum in the first of the two countries they arrive in. The bilateral pact only applies to those crossing the border at the official ports of entry.

The influx peaked in August when 6,000 people arrived in Quebec alone, the majority of them French-speaking Haitians.

While the Haitian asylum-seekers are having a tough time being granted asylum, the refugee board statistics show the overall acceptance rate of the border-crossing group at 72 per cent.

From February to October, 99 per cent of the 174 Turkish decisions were positive; Syrians were at 96 per cent; Eritreans at 99 per cent; Yemenis at 100 per cent; Djiboutians at 85 per cent and Sudanese at 79 per cent.

Both Canada and the U.S. offered temporary refuge for Haitians after the 2010 earthquake as they paused deportation to the country. Canada cancelled the special program earlier this year as conditions on the island have improved.

Dench, of the refugee council, said most of the countries with high acceptance rates fall under the refugee board’s expedited program which prioritizes cases from places where the crises and conditions are so bad that most claims are likely to succeed.

Many of these asylum-seekers also have trouble securing legal representation and filing their asylum narratives in time, and risked having their claims considered abandoned, she said.

“We are profiling the (outcomes of) claims based on country of origin,” said Dench. “It should be based on a claimant’s individual situation.”

Meanwhile, Public Safety Minister Ralph Goodale said Canada will “be ready to cope” with another possible surge in asylum-seekers.

“We’ve had contingency planning underway now for some time, working also with provinces and municipalities to make sure that we can do two things,” Goodale told reporters.

However, the union representing border agents has expressed doubt. “We don’t think the government is ready to face another crisis,” said Jean-Pierre Fortin, president of the Customs and Immigration Union, in September.

With files from Alex Boutilier and The Canadian Press