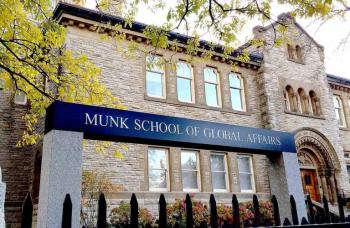 Sometimes, when you pay attention, it is easy to see how foreign policy propaganda works. Take the case of Iran.

Recently the US has choked off Iranian oil exports, listed its military a terrorist organization and dispatched an aircraft carrier and B-52 bombers to its environs to stop Iran’s “aggression”. Going along with Donald Trump’s warlike actions and rhetoric, Justin Trudeau’s government has broken a promise to restart diplomatic relations, failed to withdraw Iran from Canada’s list of state sponsors of terrorism and recently accused Tehran of destabilizing the region.

This is the context in which the Munk School of Global Affairs’ Citizen Lab released a recent report criticizing Iran. According to Citizen Lab, an Iran-aligned group dubbed Endless Mayfly impersonated major media sites, used fake Twitter accounts to spread false articles and targeted journalists with fake stories. Its report noted, “initial reporting on some of the inauthentic articles speculated that Endless Mayfly may have links to Russia; however, based on the evidence gathered from our investigation we conclude with moderate confidence that Endless Mayfly is Iran-aligned and has been operational since at least early 2016.”

The University of Toronto based lab’s accusations were picked up by dozens of media outlets around the world. A New York Times headline read: “ReportShows How a Pro-Iran Group Spread Fake News Online” while the Globe and Mail noted “New Citizen Lab report suggests Iran spreads fake news.”

But, the report’s concluding section titled “Narratives fit Iranian interests, propaganda” isn’t convincing. One reason it claims Iran was responsible for the initiative is that “framing Saudi Arabia as a creator and supporter of global Islamist terrorism is also a very common theme in Endless Mayfly content and is consistent with recent rhetoric from Iran’s top-ranking officials.” But, Iranian officials certainly aren’t the only ones who claim Saudi Arabia contributes significantly to Islamic terror.

While the media mostly covered Citizen Lab’s claims uncritically, its positions on Iran should be viewed with significant skepticism. This ‘lab’ has produced a stream of reports critical of Iran and, in fact, is part of a government funded effort to destabilize that country. In March Citizen Lab Director Ron Deibert co-authored “Censors Get Smart: Evidence from Psiphon in Iran.” Previously, Citizen Lab published “Group 5: Syria and the Iran Connection”, which described a malware operation targeting Syrian opposition figures that purportedly came from Iran. The Lab published After the Green Movement: Internet Controls in Iran, 2009-2012 and in 2015 they detailed hacking of Iranian dissidents. While Citizen Lab carefully avoided naming a culprit, their press release hyped the matter and a number of media reports implied Iranian authorities were responsible.

Deibert is a regular at anti-Iranian events. He spoke at a Toronto International Film Festival screening of a movie about the 2009 Green Revolution in Iran and a 2012 Walrus article described a “network of local Farsi speakers linked to Deibert and Psiphon.”

With early financial support from the Ford Foundation, Donner Canadian Foundation and Open Society Institute, Citizen Lab developed software to bypass government censors. It worked with Voice of America, Radio Free Europe and Radio Farda in Iran to disseminate its Psiphon technology to Iranian dissidents. A 2018 Vice story titled “This App Is Helping Iranians Beat Tehran’s Internet Censorship” described Psiphon’s growth in Iran. It noted, “the lab, and the school, has spent years devising various ways to improve civic engagement in Iran, especially online, with some financial support from the Canadian government.”

The Munk School of Global Affairs joined the Stephen Harper Conservatives’ low-level war against Iran. After severing diplomatic ties and designating Iran a state sponsor of terrorism in 2012, Foreign Affairs ploughed $250,000 into the Munk School’s Global Dialogue on the Future of Iran. The aim of the initiative was to foment opposition to the regime and help connect dissidents inside and outside Iran. Employing cutting-edge Internet strategies, the Iran Dialogue was launched at a two-day conference kicked off by foreign minister John Baird. Some Iranian Canadians criticized the 2013 Global Dialogue on Iran. In a letter to Munk School head Janice Stein, who was awarded an honorary doctorate from Hebrew University “in tribute to her unwavering devotion to Israel”, the president of the Iranian Canadian Community Council Niaz Salimi wrote: “Conspicuously absent from the event were experts, academics, political activists, students, bloggers, journalists and members of the Iranian diaspora (including those of the Iranian-Canadian community) whose views on Iran do not fully concur with the positions of the Harper government.”

The Munk School has been a hub of anti-Iranian activity. A senior research fellow until recently, Mark Dubowitz was dubbed “The Man Who Fights Iran” by Ynet, Israel’s largest English language news site. Alongside his position at the Munk School, Dubowitz was executive director of the extremist pro-Israel Foundation for Defense of Democracies where he led its campaign against the Obama administration’s Iran nuclear deal. In 2011 Dubowitz said, “the best way [to end Iran’s nuclear program] is to work toward changing the regime.”

Expanding the Global Dialogue on the Future of Iran, Foreign Affairs gave the Munk School $9 million in 2015 to establish the Digital Public Square project. The federal support “will enable the Munk School to create our new Digital Public Square, a square designed for citizens who cannot come together physically to exchange ideas about the future of their country,” Munk School head Janice Stein said. The countries cited were Iran, Syria, Iraq and Russia. There was no mention of employing digital technologies to undermine online censorship in equally, or more, repressive allies such as Rwanda, Jordan, Honduras or Saudi Arabia.

This is one-way Canadian propaganda works: Establish who your enemies are — generally defined by big corporations, rich people and whoever is in power in Washington — attempt to destabilize their “regimes”, then accuse their governments of interfering in your affairs.

Citizen Lab’s recent report criticizing Iran is part of a government funded effort to demonize that country, which could be a step towards a military assault.