NGOs put a progressive face on the exploitation Of Haiti 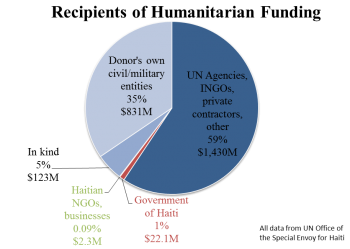 Imagine living in a country where the entire social services sector is privatized, run by “charities” that are based in other countries and staffed by foreigners who get to decide whether or not you qualify for assistance.

Welcome to Haiti, the “Republic of NGOs.”

As salacious details about Oxfam officials hiring Haitian girls for sex make headlines, the media has downplayed NGOs lack of accountability to those they purportedly serve. Even less attention has been devoted to the role so-called non-governmental organizations have played in undermining the Haitian state and advancing wealthy countries’ interests.

While impoverished Haitians get short shrift, NGOs respond to the interests of their benefactors. After the UN occupation force brought cholera to Haiti in October 2010, Oxfam and other NGOs defended the Washington-France–Canada instigated MINUSTAH (Mission des Nations Unies pour la stabilisation en Haïti). In response to Haitians protesting the UN’s role in the cholera outbreak, Oxfam spokeswoman Julie Schindall, told the Guardian “if the country explodes in violence, then we will not be able to reach the people we need to.” At the same time Médecins Sans Frontières’ head of mission in Port-au-Prince, Stefano Zannini, told Montreal daily La Presse, “our position is pragmatic: to have learnt the source at the beginning of the epidemic would not have saved more lives. To know today would have no impact either.”

Of course that was nonsense. Confirming the source of the cholera was medically necessary. At the time of these statements UN forces were still disposing their sewage in a way that put Haitian life at risk. Protesting UN actions was a way to pressure MINUSTAH to stop their reckless sewage disposal and generate the resources needed to deal with a cholera outbreak that left 10,000 dead and one million ill.

Worse than deflecting criticism of the UN’s responsibility for the cholera outbreak, NGOs put a progressive face on the invasion/coup that initiated MINUSTAH. Incredibly, many NGOs justified US Marines taking an elected President from his home in the middle of the night and dumping him 10,000 km away in the Central African Republic. On March 25, 2004 Oxfam Québec and a half dozen other Canadian government-funded NGOs defended Canada’s (military, diplomatic and financial) role in the ouster of thousands of elected officials, including President Jean-Bertrand Aristide, before the Standing Committee on Foreign Affairs. Marthe Lapierre of Development and Peace stated: “We’re not talking about a situation where a rebel group suddenly orchestrated Aristide’s departure. We’re talking about a situation where the Aristide government, since 2000, had gradually lost all legitimacy because of involvement in activities such as serious human rights violations and drug trafficking, but also because it was a profoundly undemocratic government.” Oxfam Québec regional director Carlos Arancibia concurred: “I fully agree with the analysis presented by others. It’s important to understand that things went off the rails starting in the year 2000, with the election.”

(After they lost the May 2000 legislative elections the opposition claimed that the electoral Council should have used a different voting method, which would have forced eight Senate seats to a runoff. Aristide’s Fanmi Lavalas party would likely have won the runoff votes, but the US/Canada backed opposition used the issue to justify boycotting the November 2000 presidential election, which they had zero chance of winning. For its part, Washington used the election dispute to justify blocking aid to the country. Even without the disputed senators, Fanmi Lavalas still had a majority in the senate and even when seven of the eight Lavalas senators resigned the aid embargo and effort to discredit the elections continued.)

At the time of the coup most of Haiti’s social services were run by NGOs. A Canadian International Development Agency report stated that by 2004, “non-governmental actors (for-profit and not-for-profit) provided almost 80 percent of [Haiti’s] basic services.” Amongst other donor countries, the Canadian government channelled its “development assistance” through NGOs to shape the country’s politics. According to CIDA, “supporting non-governmental actors contributed to the creation of parallel systems of service delivery. … In Haiti’s case, these actors [NGOs] were used as a way to circumvent the frustration of working with the government … this contributed to the establishment of parallel systems of service delivery, eroding legitimacy, capacity and will of the state to deliver key services.” As intended, funding NGOs weakened the Aristide/René Préval/Aristide governments and strengthened the US/France/Canada’s hand.

The Oxfam “sex scandal” should shine a light on the immense, largely unaccountable, power NGOs continue to wield over Haitian affairs. In a decent world it would also be a lesson in how not to use “aid” to undermine democracy.