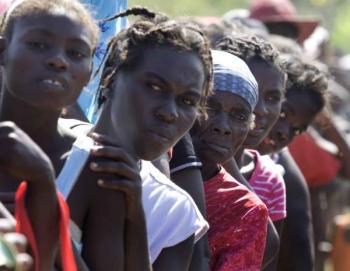 Two important developments concerning the rights of women in Haiti have occurred in recent days.

On January 4, the Inter-American Commission on Human Rights (IACHR) ordered the Haitian Government to increase protection for women and girls in the internal displacement camps, and to effectively prosecute rape complaints. The Commission issued the order in response to a petition filed by an impressive collaboration including the Institute for Justice and Democracy in Haiti (IJDH), its sister organization in Haiti, the Bureau des avocats internationaux, three Haitian grassroots women’s groups, and several other U.S. organizations. For more detail, read a press release from the IJDH here: http://ijdh.org/archives/16256.

The Commission’s order includes:
* Medical and psychological treatment for victims of sexual violence in 22 IDP camps
* Security improvements in the camps, including lighting, and better security patrols with more women officers
* Training for police and prosecutors on responding to gender-based violence
* Creating special units in the investigative police and prosecutors’ offices to investigate rapes
* Assuring that grassroots women’s groups play a leadership role in the planning and execution of efforts to combat sexual and other kinds of violence in the camps.

This victory does not end sexual assaults in the camps, but it is an important tool in Haitian women’s long struggle to reduce the incidence of rapes of women and girls. You can read the full petition here http://ijdh.org/archives/15071. See also the IJDH website section on gender-based violence, http://ijdh.org/projects/rapp.

Meanwhile, Amnesty International has just issued a 23-page study entitled, "Haiti: Sexual violence against women increasing." Its recommendations are similar to some of those won in the January 4 IACHR ruling. You can read the announcement of the report and download it here: http://www.amnesty.org/en/news-and-updates/report/haiti-sexual-violence-against-women-increasing-2011-01-06 or you can read the pdf attachment on this page.

In Canada, the Amnesty International report is being widely reported. Next to nothing has been reported of the IAHCR decision.

Also getting some media attention is a lengthy, year-one report on the conditions facing children in Haiti just issued by UNICEF. Though the report paints a grim picture, the overall message is upbeat--UN agencies like UNICEF are helping to lead Haiti to a brighter future. In the concluding words of the report, "UNICEF is working hard to make sure that (the year 2010) is the hardest year that Haitian children will ever have to bear... In partnership, with sustained support and a collective vision, we can ensure that children born today not only survive, but thrive in a Haiti fit for Children." The UNICEF report can be accessed here.