The pit of San Pedro: the life and death of a Canadian mine in Mexico 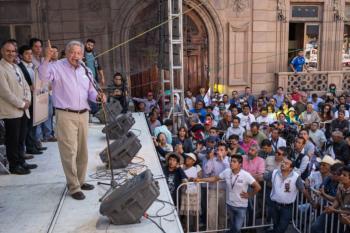 Mexico’s current president, Andrés Manuel López Obrador, gives a speech at a MORENA rally in San Luis Potosí during his campaign for the federal election in 2017. A promise to tackle corruption in the Mexican government was one of his key campaign messages.

Arriving in Cerro de San Pedro is like taking a step back in time. The original framework of the town remains semi-intact, with winding cobblestone streets and houses nestled into the sides of the hills.

The surrounding desert landscape is a tranquil setting for the small shops and restaurants operated by local entrepreneurs.

But beneath this quiet veneer lies a story of conflict — evident in the missing face of the namesake cerro (hill) of San Pedro, now vacantly overlooking the town.

Prior to my arrival in Cerro de San Pedro, I knew little of the town where a Canadian company had constructed an open-pit mine, Minera San Xavier, a stone’s throw away from the historic townsite and relocated the neighbouring hamlet of La Zapatilla to make room for the mine’s processing facilities.

But beyond the visible impact of the Cerro de San Pedro mine were rumours of sickness that locals were hesitant to speak of, the story of a lawyer opposed to the mine who was forced to flee Mexico to claim refugee status in Canada and the grim reality of a municipal president who, after pushing back against mine permits, was found dead with a bullet in his head.

The mine and the promise

Two years after the ratification of NAFTA (North American Free Trade Agreement) opened Mexico’s borders to increased international investment in 1994, Metallica Resources announced its plans to construct what it claimed would be one of the greatest open-pit gold and silver mines in the world. It was one of the first instances of a Canadian mining company taking advantage of the investment opportunities presented by NAFTA and the mining reforms of the 1990s.

The new mine proposal was met with a mixture of apprehension, anticipation and opposition by the residents of Cerro de San Pedro and the nearby state capital of San Luis Potosí.

Cerro de San Pedro is one of the oldest mine sites in Mexico, and the townsite serves as a living museum for the historical mining heritage of San Luis Potosí. The hills surrounding Cerro de San Pedro bear witness to centuries of subterranean mining activity as various companies passed through the town.

While the mine brought promise of renewed economic development to the historical-yet-dying mining town, there were also concerns over the use of cyanide at its processing facility and requirements for large amounts of water in a water-scarce region.

The plan included the use of a heap-leaching method to extract gold and silver from ore extracted from an open pit. After blasting the hill, large amounts of rock containing tiny particles of gold and silver were transported by truck and piled onto a leach pad. This heap of material was then irrigated with a cyanide solution that leaches minerals, creating a heavy sludge. Recovered minerals are then smelted into gold and silver bars known as doré, which are shipped elsewhere for further refining. The relatively new method of mining was a significant departure from the more familiar subterranean mining near Cerro de San Pedro, which traditionally required tunnels built into well-established mineral deposits.

The project catapulted the tight knit community deep into social conflict between those who were opposed to the mine destroying the symbolic hill of Cerro de San Pedro, and those who saw it as an economic opportunity.

When community members from Cerro de San Pedro began to voice opposition to the mine, it wasn’t long before academics, professionals, lawyers and ecologists from the state capital took note.

A movement known as the Frente Amplio Opositor, the Broad Opposition Front, emerged to fight the permits issued to the mine at both the state and federal levels. Successive court battles and legal challenges successfully stalled the mine, for a time.

But by 2007, all legal options were exhausted. Rulings were overturned or unenforced and the mine commenced operations under the new ownership of New Gold and amid tangible civil unrest.

There are still unanswered questions about how Metallica Resources originally acquired land from the municipality and surrounding ejidos, communally owned farming collectives.

An estimated $20 billion of taxpayer support flows through Export Development Canada to the industry each year, by way of subsidized financing and insurance backing for Canadian firms operating abroad.

Previously, these kinds of cases related to human rights violations were dismissed by the Canadian courts which argued they should be heard in their countries of origin.

A 2015 discussion paper by the International Civil Liberties Monitoring Group and MiningWatch Canada found 32 per cent of Canadian mining companies were involved in conflicts overseas. A report from the Justice and Corporate Accountability Project found that between 2000 and 2015 there were 44 deaths, more than 400 people injured and more than 700 cases of criminalization in connection to 28 Canadian mining companies operating in 13 different countries across Latin America.

In response to growing concern about the behaviour of Canadian-based mining companies, in early 2018 the Liberal government announced an independent ombudsperson would be established to resolve conflicts between Canadian companies and local communities overseas.

The office of the ombudsperson, which would have the mandate to investigate human rights abuses and withhold governmental support, has yet to be filled.

Beyond for or against mines

The Canadian-owned New Gold Inc. is now the sole owner of the Mexican subsidiary Minera San Xavier, which it purchased from Metallica Resources in 2007 — the same year the mine went into operations.

I met with Marc Dávila Harris, the former director of sustainable development for New Gold, in Cerro de San Pedro. He said the main mistake of the previous owner was creating division in the community.

As a social and cultural anthropologist, Dávila said there are bigger questions at stake in communities amid resource extraction — questions that go beyond being simply for or against mines. He said he’s trying to understand “why we love all the ultimate things in our comfortable lives, but we are against the activities that create part of those benefits for our way of living.”

“The conversation is completely sterile,” Dávila said, “if we think that mining is good or bad.”

The debate ought to centre on how mining companies are interacting with communities and with the environment.

New Gold holds an impressive list of industry accolades for its leadership in social responsibility both in Canada and Mexico. But these awards, critics are quick to point out, aren’t granted in response to government regulated or legislated guidelines but are instead issued by corporate bodies.

This had led many advocates of mining reform to argue Canada urgently needs an independent body or ombudsperson to oversee these companies and act as a watchdog for their activities abroad.

In a submission made to the Supreme Court of Canada for a human-rights case brought against Nevsun and its operations in Eritrea, MiningWatch Canada argued that Canadian common law needs to recognize the “realities of the globalized economy” and that “transnational companies often operate where [democratic and regulatory] institutions are weak.”

A Canadian mine in Mexico, a Mexican refugee in Canada

Enrique Rivera Sierra — a fiery, outspoken lawyer in his early thirties at the time the Frente Amplio Opositor emerged — was a central opponent of the mine, helping organize demonstrations and raising awareness about the environmental impacts of the mine in both Mexico and Canada.

Between 2007 and 2012 Rivera lived in Canada as a political refugee.

During Semana Santa, Easter week, in 2006, Rivera and his now-wife Lorena Gil Barba were handing out information about the mine in Cerro de San Pedro when they were attacked by two men who allegedly worked for the mine. Rivera sustained head injuries, which were documented by a photographer working for the local newspaper.

Yet the violent attack didn’t amount to any response from police. Rivera said tensions continued to escalate. When he learned of the local authorities’ plans to have him arrested, he was forced to go into hiding at the house of a family member.

Daviken Studnicki-Gizbert, a professor in Latin American and environmental studies at McGill University, established a research group called “investigating Canadian mining in Latin America” in 2007 and was familiar with Rivera’s plight. At the professor’s urging, Rivera decided to flee to Canada.

“I didn’t even know where Montreal was on a map,” he told me. He received refugee status in Canada in 2010 after a hearing found there was “a reasonable possibility that [Rivera] would be persecuted were he to return to Mexico today and in the future … the state, both at the state and federal levels, has been the persecuting agent.”

After change in government, Rivera and his family now live once again in Mexico, in the state capital of San Luis Potosí.

The end of the mine

Rivera is skeptical of how far additional regulatory oversight in Canada can go. He’s hopeful that the change in state and federal governments will address the corruption in Mexican politics, which he believes is at the root of the conflict around mines.

Researchers have documented a tension between the interests of foreign mining companies and domestic governments tasked with enforcing local laws. An article published by the Canadian Foreign Policy Journal highlights the “economic benefits of foreign extractive options tend to overshadow home governments’ desire to enforce stringent regulations and standards.”

Professor Ann Helwege, researcher of mining in Latin America at the University of Boston, suggests in an article that there is a “sense that Canadian mining firms act with impunity” in Latin America. But, she adds, “the real work must be done in Latin America” to address the environmental risks of mining, protect the interests of local communities and reduce mining conflict.

Twenty years after exploration first began, the company has completely mined out the cerro of San Pedro and the operation has moved into its closure phase. Ironically, the conflict around the mine has helped put the town on the map and it has since become a popular weekend destination. Much of New Gold’s focus in its closure phase has focused on supporting businesses in Cerro de San Pedro to capitalize on this tourism potential.

Still, many residents from Cerro de San Pedro and the surrounding communities who have been dependent on the mining industry since the town’s inception are left with questions of what is to come. Opponents, jaded by the actions of both the Canadian and Mexican governments, continue to dispute the legitimacy of the mine’s existence to this day.

Even without the emblematic hill, Cerro de San Pedro will remain even after the mine has come and gone. It belongs to the people who continue to make this place their home.

Amanda is a Canadian-born visual ethnographer and environmental practitioner.