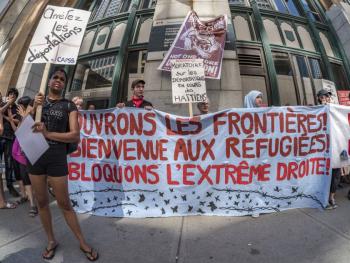 Demonstrators outside of Immigration Canada's offices in Montreal on Saturday denounced the federal government's policy of deporting people to Haiti while violent protests continue to take place throughout the country. DAVE SIDAWAY / MONTREAL GAZETTE

About 30 protesters carried signs denouncing strict immigration policies and chanted “Nobody is illegal” outside the offices of Immigration Canada at the corner of St-Antoine and Cathédrale Sts. downtown on Saturday.

They denounced the Canadian government’s policy of deporting people to Haiti while violent protests continue to take place throughout the country.

“If we consider it dangerous that there’s instability and violence (in Haiti) and that Canadians shouldn’t go, that means that we shouldn’t deport people there also,” said Jennie-Laure Sully, a demonstrator who works with Solidarity Across Borders, the group that organized the event.

“These people are being deported back to danger,” she said. “And that’s not right.”

Solidarity Across Borders is an organization that wants all undocumented people living in Canada to be given the status of either permanent resident or citizen.

According to the organization, less than 50 per cent of refugee applications in Canada are accepted, and that number drops to 10 per cent in the case of Haitians.

Frantz André, a spokesperson for the Comité d’action des personnes sans statut (CAPSS), said that since the number of refugees and migrants coming to Canada has increased, the government has stepped up the number of deportations — particularly in the Haitian community — to dissuade people from making the journey to Canada.

The Canadian government has had a moratorium on deportations to Haiti in the past, when the country was rocked by violence or natural disasters. André said he believes a moratorium has to be re-established, given current events taking place in the country.

“It’s a very sensitive political environment right now,” he said. “There could be fires in the streets at any moment.”

On July 6, the Haitian government announced massive fuel price hikes in the desperately poor nation, sparking violent protests that closed the main airport in Port-au-Prince and blocked highways across the country. Tires were burned in the streets, and stores and businesses were looted and set ablaze.

The Canadian government issued a travel advisory recommending that Canadians avoid all non-essential travel to the country.

On Friday, the advisory was downgraded, but the government still recommends travellers exercise a “high degree of caution” in Haiti and avoid some neighbourhoods altogether.

André criticized Prime Minister Justin Trudeau’s message of inclusion. On Jan. 28, 2017, Trudeau tweeted: “To those fleeing persecution, terror and war, Canadians will welcome you, regardless of your faith. Diversity is our strength,” with the hashtag “Welcome to Canada.”

“The ‘welcome to Canada’ has become ‘get out of Canada,’ and that’s not right,” André said.