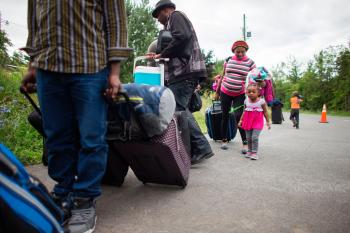 Haitians crossing the border from the U.S. to Canada. One Canadian headline read: “PM should speak to Haitians and reveal low rate of acceptance for claims.”
Credit:
Geoff Robins/AFP

Donald Trump has ordered an end to the Temporary Protected Status (TPS) of 59,000 Haitian refugees and economic migrants living in the United States. The protected status, which dates from the January 2010 earthquake, will end in July 2019, the Trump regime has decided. (See: “Trump to 59,000 Haitians: you have 18 months to pack your bags,” VOX News, Nov 20, 2017.[1])

The protected status of 262,000 people from El Salvador and 57,000 from Honduras living in the U.S. is similarly threatened. The Salvadorans’ status is up for renewal in March 2018. No date is set for a decision on the status of Hondurans.

What will happen to the 59,000 Haitians? Is it safe for them to return to their home countries? If not, why not? Why did they leave Haiti in the first place? Why are they being forced to return home?

Who cares? According to a Canadian Press (CP) report published on CBC News, the only apparent concern for Canadians is that Canada is threatened by Trump’s inhumane refugees policies, not the victims who may seek refuge in Canada.

The CP report on the state-run CBC news explains that the response of the Canadian government to the TPS emergency in the U.S. is to tell victims they are not welcome in Canada. Indeed, Liberal MP Emmanuel Dubourg is stressing to all who will listen that the rate of acceptance of refugee applications by Haitians in Canada has fallen to 10%.

That is not a criticism of Canadian refugee policy. Dubourg is hardly sympathetic to Trump’s victims. Rather, he is one of the representatives selected by Ottawa to travel to cities in the United States to deliver a message that Haitian refugee applicants are not welcome at “unauthorized” land border crossings. Canadian Press reports:

“I’m there to inform them: be careful before you make a decision [to cross the U.S. border into Canada and make a refugee claim],” he said in an interview Monday (November 20].

Dubourg, who is Haitian, will also be trying to clear up a misconception that asylum is simple to obtain in Canada. He said statistics he has seen suggest the acceptance rate for Haitians who arrived over the summer now sits at 10%, down from about 50% previously. The Immigration and Refugee Board was unable to immediately confirm that number…

Another Canadian Press report, this one in The National Post and Toronto Star on Nov. 20, explains:

Liberal MP Emmanuel Dubourg said that the recent announcement that Canada will accept close to one million immigrants over the next three years ended up as a story in the Haitian press about Canada opening its doors to a million immigrants this year. It was framed as proof Haitians were welcome.

Dubourg said he called the paper two weeks ago to clear things up but not before he realized the story had been shared hundreds of times on Facebook.

He said there is a great deal of uncertainty in the Haitian community but the message needs to get out that Canada isn’t necessarily a default option. He’ll be taking that to New York on Tuesday in his second trip to the U.S. for outreach purposes.

El Salvador and Honduras, respectively, have the highest and second highest rates of murder in the world, according to the United Nations Office on Drugs and Crime (Wikipedia).

The elected president of Honduras was overthrown in a violent, military coup in 2009 that was backed by the U.S. and Canada. That coup bore all the hallmarks of the coup in Haiti in February 2004 which overthrew the elected President Jean-Bertrand Aristide.

El Salvador was the victim of a vicious, U.S.-backed paramilitary civil war during the 1980s and 1990s. That war ran parallel to the U.S.-funded and organized ‘contra war’ seeking the overthrow of the government of neighboring Nicaragua and the 1979 Sandinista Revolution which brought it to power.

One CBC report in August 2017 did provide some sympathetic description of why Haitian refugees are in the U.S. and why they may be looking to move north. But this report has long since been drowned out by the overriding theme by CBC and other mainstream news coverage, which is that Canada is threatened by uncontrolled waves of Haitian refugee claimants arriving at its land borders.

CBC opinion “producer” Robyn Urback set the tone in a commentary on Aug. 23 that was headlined, “PM should speak to Haitians and reveal low rate of acceptance for claims.” Her commentary was sub-headlined, “Trudeau must dispel the myth there’s ‘always a place’ for refugees in Canada.”

That’s easy to write when you’re not Black and have never likely set foot in Haiti; when your homeland, unlike Haiti, has not been a victim of foreign military coups and a 14-year-and-counting foreign, Canada-directed military occupation regime (the UN Security Council’s MINUSTAH and now MINUJUSTH); and when you haven’t suffered a disastrously failed “earthquake aid” program staged by Canada, the U.S., and other Western powers following the 2010 earthquake in Haiti.

Canada’s mainstream media hailed the decision of Canada’s government in 2015 to accept 30,000 refugees from Syria. That decision was welcomed because it was in line with Canada’s anti-Russia foreign policy and Canada’s backing of efforts spearheaded by its NATO ally the United States and Saudi Arabia to overthrow the Syrian government.

The Associated Press has a brief report on Nov. 21 explaining how Haitian Americans are organizing to reverse the TPS decision of Canada’s White House ally.

(Published also on Roger Annis’ blog: A Socialist in Canada.)

Note:
[1] VOX reports the United Nations’s inflated figures for 2010 earthquake deaths, saying, “Haiti’s been covered by Temporary Protected Status since shortly after the 2010 earthquake that killed as many as 316,000 people and displaced 1.5 million more.” The displacement figures are accurate, though they were fueled by already-desperately poor Haitians looking for relief from the aid that arrived in the country following the earthquake. But the only scientific study of earthquake deaths arrived at an estimation of 40,000 to 70,000 deaths. That is a dire humanitarian disaster in its own right.

The UN’s inflated figures served to fuel the fundraising for earthquake relief that benefitted the aid and charity industries. With important exceptions that deserve much praise, most of the Haiti aid money was not spent in the country and it failed to bring any lasting change to the lives of Haitians. It certainly never came close to the pledges of Western government to ‘build back better’ in Haiti. That story is told in Tim Schwartz’s 2017 book, The Great Haiti Humanitarian Aid Swindle.

*  Department of Homeland Security distorts law and precedent to ignore glaring facts on Haiti TPS, by the Institute for Justice and Democracy in Haiti (Boston), Nov 22, 2017