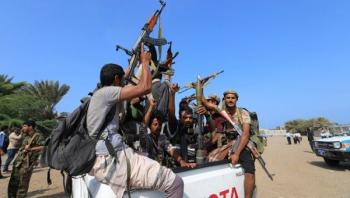 Houthi militants ride on the back of a truck as they withdraw from Hodeidah, part of a U.N.-sponsored peace agreement. | Photo: Reuters

The kingdom offered as much as US$10,000 to Sudanese families facing economic hardship to enlist their children to fight against the Houthis in the now four-year-long war, the New York Times reported Friday.

"Families know that the only way their lives will change is if their sons join the war and bring them back money," Hager Shomo Ahmed, recruited to fight in Yemen in 2016, when he was 14 years old, told the NYTimes.

Many of the child soldiers are between 14 and 17 years old and are frequently sent off by their parents, some so eager for money that they bribed Sudanese unit officers to choose their sons to go and fight, according to the report.

Almost all the fighters from Sudan seem to come from Darfur, an impoverished region which was the site of a genocide that began in 2003, in which child soldiers were used in battles. Roughly 300,000 people have been killed and 1.2 million displaced during 12 years of conflict.

In 2009, the International Criminal Court indicted President Omar al-Bashir, who has been in power for nearly 30 years, for war crimes, genocide, and crimes against humanity linked to the Darfur War. Yet al-Bashir continues to govern the country, which sunk into a grueling economic crisis after the southern half of the country voted to secede in 2011 and took with it three-quarters of the country's oil output.

As a means to strengthen their intervention in Yemen, Saudi Arabia appears to have seized the opportunity to gain child soldiers from Sudanese families desperate for financial relief.

“People are desperate. They are fighting in Yemen because they know that in Sudan they don’t have a future,” Hafiz Ismail Mohamed, a former banker, economic consultant, and government critic told the NYTimes. “We are exporting soldiers to fight like they are a commodity we are exchanging for foreign currency.”

The Saudi-led war against Yemen began in 2015 after Houthi rebels seized control of the capital, Sanaa, and began claiming territory in the south toward Aden, Yemen’s second-largest city.

A coalition led by Saudi Crown Prince Mohammed bin Salman, which includes the United Arab Emirates, intervened in Yemen in 2015 in support of President Abd-Rabbu Mansour Hadi, deposed by the Houthis.

Sudan joined the Saudi-led alliance, deploying ground troops to Yemen by the thousands. Children made up around 20 to 40 percent of the Sudanese units in Yemen, according to five Sudanese fighters who returned from Yemen.

In November 2018 alone, nearly 3,000 people died as a result of the war and the harsh conditions surrounding it. Since January 2016, around 60,110 people have been killed, according to the Armed Conflict Location and Event Data Project.

The war has revived old tensions between northern and southern Yemen, which were formerly two separate countries before converging into a single state in 1990 under former President Ali Abdallah Saleh, who was assassinated in 2017. The conflict and the ensuing economic collapse have left 15.9 million people, 53 percent of the population, struggling to survive amid scarcity and famine.

Saudi Arabia and its allies claim that Houthis are backed by Iran in an effort to expand its control over the region. Tehran and the Houthis have rejected these claims. The Houthis argue they aim to regain Yemeni sovereignty and eliminate Saudi influence over domestic affairs.

Both sides entered peace talks in December and are expected to hold another round of  talks in January in order to come to an agreement on the political framework for negotiations that could end the four-year war, which has sparked an urgent humanitarian crisis.