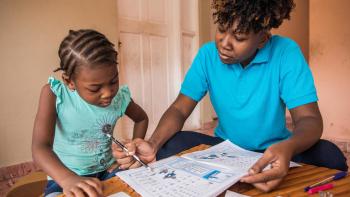 In the middle of the deadly political unrest that has rocked Haiti for more than two months, another crisis is unfolding -- most schools are closed, leaving Haitian children with nothing to do and their parents flailing to cope.

In some homes, parents are trying to teach their own kids, while simultaneously working to assuage their mounting anxiety about the violence they see every day in the streets.

"I'm muddling through. I don't really know how to do all this," confesses Edine Celestin, who is holding a reading workbook in her lap.

"One might think it's easy to teach your kids, but you only realize afterwards that the child did not understand what you said, and you have to teach the same lesson three or four times."

Since September, Celestin has tried to make sure her five-year-old daughter gets some kind of schooling each day. Their living room has become a classroom.

But somewhere between her bedroom and the makeshift schoolhouse, little Lyne-Renee is prone to boredom -- she hardly ever even leaves the house anymore, due to the risk of violence erupting outside.

"She has to know how to read and write, at least a little bit, in order to be admitted to a primary school next year," Celestin says.

"Registration will take place in January and February. We have a lot of work to do," adds the worried mother, who knows that the spots in the best schools are highly coveted.

No money, no teachers

Haiti's public schools already suffer from a severe lack of funding and teachers. They can only accommodate a third of the pupils.

The impoverished Caribbean nation's crisis began in late August, prompted by a national fuel shortage. Since then, protests against unpopular President Jovenel Moise have raged.

Barricades block the streets, and armed gangs roam freely. Nearly 70 percent of the schools have remained closed, according to the UN Children's Fund (UNICEF) and its cultural agency UNESCO.

"The school principal told us several times, 'Come on Monday to do a bit of work.' When we arrive, the teachers are not there, and the principal is alone with five or six students," explains Reevens Bosquet, who is 20 but still hopes to complete his high school education.

Bosquet is not alone -- many children in Haiti get a late start on going to school and suffer through frequent interruptions in their attendance along the way when their parents cannot afford to send them.

As a result, many students fall behind.

Bosquet and his two brothers, who live with a cousin because their neighborhood is riddled with crime, are worried that the last two months will set them back even farther.

"I don't feel good because I'm already behind. I am getting older, and with the country all messed up, it's getting complicated," says 18-year-old Evensky Bosquet, who is already five years behind schedule.

As two of the Bosquet brothers are hoping to work in the restaurant industry, the trio spends their time preparing meals and gathering fruit from their cousin's yard, where they otherwise play marbles or exercise -- anything to forget the mess that Haiti has been in since they were born.

Society has slowly crawled back to life in Haiti in recent days, and the government is putting on a brave face about the 50 or so days of classes that are already lost.

Education Minister Pierre Josue Agenor Cadet told AFP that two possible calendars have been set up -- one with classes resuming on December 2, and the other with a mid-January start.

Under those plans, the school year would be extended until late July, instead of the usual June end date.

Despite the government's confidence, Samy Janvier says he feels incapable of telling his eight-year-old daughter Samara when she might see her classmates again, just as he struggles to explain why she can't go to school.

"We'd love to be able to tell our kids that it's all because of a revolution in society, but in reality, we don't see an end to all this on the horizon," Janvier says, while he helps Samara do some practice math problems as two-year-old Samy Jr looks on.

"Some parents are better off and can do some lessons with their children, but I think a lot about the parents who didn't go to school themselves and don't know how to read or write."

Janvier says he is worried that Samara is falling behind in her lessons, but he has a much harder time dealing with her daily fears.

"When her mother goes to work, she gets very scared. She cries because, as she says, 'They're going to run over Mom's car, they are going to shoot my mom,'" he laments.

"This is really the saddest thing of all, that kids feel obliged to even think about such things."

The United Nations said in early November that at least 42 people had been killed and dozens more wounded in anti-government protests.

The soaring tensions have convinced some middle-class and well-off parents to send their children abroad to study.

"My daughter spent her summer vacation in the United States. She has friends who went back to school in August," Janvier says.

"She knows there are other options, and she doesn't understand why we are not looking at them yet," he added, with barely a scrap of optimism about what is to come in his country.