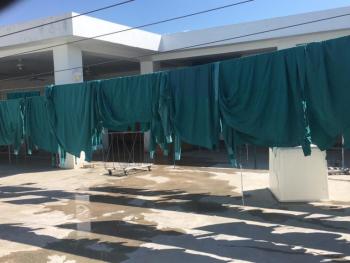 While social distancing might be possible for Haiti’s elite, living in comfort behind stone walls, the country’s poor majority faces a different reality.

“Social distancing is practically impossible for people of the lower class, because in a small house we can find more than 10 people in a room, it is the reality of districts like Cité-Soleil, Bélair, Jalousie and many others,” Dr. Youri Louis, a physician and leadership committee coordinator for the nonprofit EqualHealth, said in an email to the Haitian Times.

In Haiti, the economic lives of millions depend on daily transactions, often via the vast informal economy. Despite educational efforts designed to limit the spread of the novel coronavirus, many mistrust the messaging from the government, which faces limited resources to stem the pandemic. Medical workers fear the lack of social distancing could overwhelm the country’s unequipped health care system.

As the virus spreads around the world, infecting more than 1.8 million people and counting, it has exposed income inequality in both rich and poor countries. Haiti is one of the most unequal countries in Latin America and the Caribbean, with the richest 20% of the population holding over 64% of the country’s wealth. Roughly 60% of the population lives on less than $2 per day.

According to data from Haiti’s Ministry of Public Health and Population (MSPP), Haiti had at least 365 suspected cases and 40 confirmed coronavirus cases as of April 12, with six cases resulting from local transmission. Cases have been recorded in seven of Haiti’s 10 departments.

The government has closed Haiti’s border with the Dominican Republic and shut down seaports and commercial air traffic. The Haitian National Police are enforcing a ban on large gatherings and an 8 p.m.-5 a.m. curfew, and government officials have disseminated prevention messages via radio and TV spots, flyers and posters.

Still, many of Haiti’s most disadvantaged citizens do not trust the messaging coming from the government, according to Louis.

“I think that there is a great commitment on the part of the authorities in the circulation of radio and television spots to help in prevention, but we should also be able to convince the population of the existence of the disease with testimonies from affected people,” Louis said.

Elizabeth Campa, senior health and policy advisor for Zanmi Lasante, the Haitian sister organization of the nonprofit Partners in Health (PIH), said that without social distancing, health professionals are faced with the challenge of witnessing how quickly the disease can spread.

To minimize spread, PIH, which provides health care in partnership with the Haitian government and other partners, is increasing its capacity to conduct rapid testing, particularly on the border with the Dominican Republic. However, the National Public Health Laboratory in Port-au-Prince is the only facility in the country that can provide official test results using the leading mechanism, polymerise chain reaction (PCR) testing.

In highly populated areas, “we need to ensure that contact tracing is in place,” something PIH has been doing, Campa also said.

Those who test positive also need social support, including food and access to clean water. PIH has 3,500 community health workers capable of providing this support, along with partners like MSPP and GHESKIO.

Still, Campa added, the government budget to support these activities is very limited, and PIH is trying to work with international organizations like The Global Fund, World Bank and Inter-American Development Bank to obtain more funding.

Haiti’s formal sector has internalized some social distancing measures, with banks allowing fewer customers inside and operating within a three-hour window, from 9 a.m. to noon. But out on the streets, life has not slowed down much.

Kerventz Sylus, a language instructor who lives in Thomassin, a suburb of Port-au-Prince with a sizable middle-class population, has encouraged others in his neighborhood to maintain social distancing and remain at home as much as they can.

“I try to stay home as much as possible,” Sylus said. “The way that I see the traffic … it seems that it was nothing, (like) we live in normal time,” he added, about daily activity in the country.

Those who work in Haiti’s vast, unregulated informal economy can hardly afford to limit their daily activities. The World Bank has reported that the informal sector employs the vast majority of Haiti’s workforce of more than 4 million people.

The nonprofit Fonkoze provides micro-finance, community health and other services in 44 different locations throughout Haiti, many in rural areas. Its roughly 200,000 clients are mostly women who live on the income they receive from selling goods in public markets. For these women, staying at home isn’t an option.

“Going to the market three or four times a week and traveling there by foot, they do that because they have a chance of at least making a little bit to feed their families and clothe their families and things of that nature,” said Sherry Todd-Green, Fonkoze’s director of communications and branding.

Fonkoze is working to secure masks for market vendors and share information about coronavirus. According to Todd-Green, many who live in rural areas rely on word-of-mouth for information.

Beyond the inherent difficulty of replacing revenue from the informal economy with aid, the government has minimal fiscal resources to provide relief for the majority of Haitians. According to Jake Johnston, a research associate at the Center for Economics and Policy Research (CEPR) decades of aid policy and structural adjustment have reduced the government’s budget and put many public services into private hands.

Coordinating a national public health response can be particularly difficult with Haiti’s fragmented system. As recently as 2013, 64% of the country’s health care budget was coming from international aid and NGOs.

“Without a parliament and without a budget, IMF, EU, World Bank, a lot of donor money wasn’t coming into the government that they usually rely upon,” Johnston said.

While more international aid money ‒ including a $20 million loan from the World Bank ‒ has been unlocked since the arrival of coronavirus in Haiti, Johnston said how that money is used on the ground remains to be seen.

Haiti’s health system may need all the help it can get, given the level of person-to-person contact in the country.

“If person-to-person contact continues in the same way, in about a month we will have already exceeded our capacity to manage suspected or confirmed Covid-19 cases,” Louis said.

The hospital with the greatest capacity for infected patients, he said, is University Hospital in Mirebalais, although most of its beds were occupied as of April 9. The nonprofit Partners in Health (PIH) runs the Mirebalais facility in partnership with MSPP.

Civil society groups and one of Haiti’s largest companies have come together to help the facility increase capacity. A recent gift from telecommunications company Digicel will help PIH purchase 20 ventilators, and a coalition of Haitian civil society organizations donated an additional $100,000 for ventilators, according to Campa. University Hospital has 14 ventilators, a portion of an estimated capacity of 62 ventilators throughout Haiti.

Currently, University Hospital is one of the only major facilities in the country equipped to treat coronavirus in a clinical setting. The desperate need for personal protective equipment (PPE) like masks, gowns and gloves has prevented PIH’s partners from setting up similar treatment sites.

“At the moment we are rationing and we are doing OK on PPE, but I say that cautiously, because unless we get supplies in very soon, we too will be challenged by this,” Campa also said.

A lack of PPE has prompted some physicians, including two of Sylus’s friends, to stay home from work. “They won’t go. They have to protect their families,” he said.

Haiti does not produce PPE, Campa noted, and it is unclear when shipments might arrive.

Garment factories, owned by multinational corporations, do produce hospital equipment in Haiti that is normally reserved for export. After initially closing seven factories to limit the spread of coronavirus, the Haitian government has authorized their reopening to manufacture items like hospital scrubs and masks for local use. The face masks will be used by the civilian population and are not the medical-grade, N95 masks used in hospitals.

Importing equipment could prove difficult for Haiti. The U.S., a major trading partner, has moved to restrict exports of medical supplies, and it is unclear how much the rapid devaluation of the gourde over the past several months will hurt Haiti’s purchasing power on world markets.

In addition to equipment shortages, Haiti also lacks trained medical professionals. Its share of nurses per capita ‒ 3.8 per 10,000 people ‒ is among the lowest in the Western Hemisphere.

When it comes to coronavirus, Campa drew parallels to the cholera outbreak that began in 2010 and claimed over 10,000 lives, by official measures. Poor sanitation and crowded living conditions contributed to the spread of the waterborne bacteria, she noted, and family caregivers who cooked and cared for the sick were prone to spreading the disease.

When most of the Haitian economy “depends on agriculture, or on daily wages earned from factories (or) from local merchants, etcetera, how do any of those individuals work from home? So again, it’s just very, very difficult there,” Campa said.

If trade at public markets declines, Johnston said the impact could be felt further down the food production chain, by Haiti’s farmers.

For much of the urban and rural poor, staying home could pose a far greater risk than contracting coronavirus.

“The government takes some measures, says people have to stay home, don’t have to go out if it isn’t necessary, but people (don’t) respect those rules,” Sylus said.