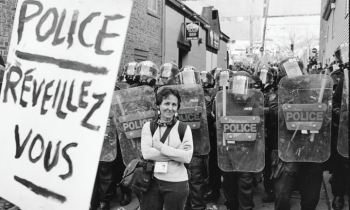 Elaine Briere is an award-winning filmmaker and photojournalist.

Dangerous Hope reveals how Canada, in contravention of international law, joined the US and France in overturning the elected government of Haiti in 2004. This ended a decade of progressive reforms in Haiti. It was the first time Canada played a strategic and military role in the removal of a democratically elected government.

Haiti gained independence in 1804 as a result of the only successful slave revolution in world history. Like most Canadians I had bought into the dominant narrative that Haiti had by 2004 devolved into an ungovernable, failed state. But many Haitians recounted a version of Haitian politics that contradicted this narrative. They described a grassroots movement called Lavalas that brought to power a series of democratically elected governments that gave priority to the needs of the impoverished majority, delivering education, health and rural development programs.

I began filming this documentary in early 2011. I learned that from its inception the democracy movement had been under enormous pressure from the Haitian elite and their international partners. Many Lavalas supporters were killed after coup of 1991 and again in 2004.

Back in Canada I discovered how this country played a key part in planning and executing the 2004 coup and bringing the old kleptocratic elite back to power. I discovered how the Canadian media and even some Canadian NGOs, though vocally demonized the government of Haiti before the coup but were virtually silent about the mass killings and incarceration of civilians and elected officials after the coup.

Why did Canada participate in the illegal and covert pre-dawn coup d’état in Haiti on February 29, 2004? Why the gap between Canada’s proclaimed humanitarian goals and our active support of opposition to the democratically elected governments in Haiti? Dangerous Hope revisits the lead-up and aftermath of this shameful chapter in recent Canadian history.