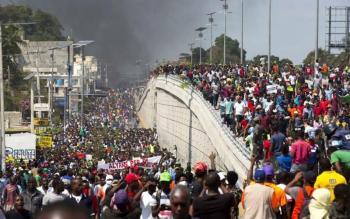 Hundreds of thousands of Haitians take to the streets in February, 2019 to demonstrate in response to the economic crisis sweeping the Caribbean nation. Photo courtesy of the Associated Press.

Justin Trudeau recently apologized for dressing up in blackface. He acknowledged that it was a racist act. But he has continued the much more significant racism of his government’s actions towards Haiti, the country that delivered the greatest ever blow to anti-blackness.

In an example of racist double standards, the government recently put out a travel advisory warning Canadians that Haitian “police have used tear gas and live ammunition to disperse crowds.” Apart from this message to (white?) Canadians, the government has yet to directly criticize the killing of Haitian demonstrators by a police force that Canada funds and trains.

Beyond its involvement with a repressive police force, the Trudeau government has provided financial and diplomatic backing to a band of neo-Duvalerist criminals subjugating Haiti’s impoverished black masses. Despite a popular revolt against President Jovenel Moïse, Canada continues to prop up a corrupt clique of politicians who’ve recently fired bullets at protesters outside the Senate and admitted to receiving payments for votes in parliament. A Miami Herald headline explained: “That there is corruption in Haiti isn’t a surprise. But then a senator admitted it openly.” An investigation by Haiti’s Superior Court of Auditors and Administrative Disputes details the scope of Canadian-backed corruption. It concluded that Moïse’s companies swindled $2 million as part of $2 billion embezzled from a discounted oil program set up by Venezuela under Moïse’s mentor Michel Martelly. A vulgar, clownish, musician, Martelly was put in place by Washington and Ottawa not long after the deadly 2010 earthquake.

Previous Canadian governments have acted as if Haitians were incapable of running their own affairs. This has been motivated by racism, corporate interests and loyalty to the US empire.

Early in the morning on February 29, 2004, US Marines flew the learned, polyglot and popular President Jean-Bertrand Aristide out of the country. For over two years the US, France and Canada imposed an “illegal” interim government headed by a man, Gérard Latortue, who had been living in the US for 15 years.

The effort to oust Aristide began in earnest as Haiti prepared to celebrate its bicentennial. To get a sense of Washington’s thinking, then Assistant Secretary General of the OAS Luigi Einaudi told journalist and activist Jean Saint-Vil and others at Hotel Montana in Port au Prince on December 31, 2003: “The real problem with Haiti is that the ‘International Community’ is so screwed up and divided that they are actually letting Haitians run Haiti.” Eleven months before Haiti’s bicentennial Jean Chrétien’s Liberal government took a major step to ensure Haitians weren’t running Haiti. They organized the Ottawa Initiative on Haiti to discuss that country’s future. No Haitian officials were invited to this assembly where high-level US, Canadian and French officials decided that Haiti’s elected president “must go”, the dreaded army should be recreated and that the country would be put under a UN trusteeship. Thirteen months after the Ottawa Initiative meeting President Aristide and most other elected officials were pushed out and a quasi UN trusteeship had begun. The Haitian military has been partially re-created.

The bicentennial independence celebration heightened the racist contempt directed at Haiti since the country’s 1791-1804 revolution dealt a crushing blow to slavery, colonialism and white supremacy. From the grips of the most barbaric form of plantation economy, the largely African-born slaves led maybe the greatest example of liberation in the history of humanity. Their revolt rippled through the region and compelled the post-French Revolution government in Paris to abolish slavery in its Caribbean colonies. It also contributed to Britain’s move to abolish the trans-Atlantic slave trade in 1807.

The Haitian Revolution led to freedom for all people regardless of color, decades before this idea found traction in Europe or North America. But, within three years of independence the lighter-skinned plantation owners overthrew and murdered the country’s liberation hero Jean-Jacques Dessalines (the French having killed famous revolutionary, Tousaint Louverture, prior to independence). In a remarkable act of imperial humiliation, two decades after independence Haiti was compelled to begin paying $21 billion (in 2004 dollars) to compensate French slaveholders for their loss of property (land and now free Haitians). Haiti promised to repay its former exploiters under threat of military invasion and the restoration of slavery. Additionally, the light skinned elite wanted an end to the embargo against the country so they could access international markets. Haiti’s independence debt took 122 years to pay off.

For over half a century Haitian politics were shaped by the “politique de doublure”. Basically, the light skinned elite chose an ignorant/old black general as figurehead president. The “politique de doublure” largely ended with the US occupation of 1915– 34 (Washington kept control of the country’s treasury until 1947). For the most part the Marines simply chose a member of the light skinned elite to ‘lead’ Haiti.

A look at the individuals who dominate Haiti’s economy today highlight ongoing racial exclusion. These wealthy, light skinned Haitians generally work with North American and Dominican sweatshop, mining and other capitalists with even paler complexions.

Trudeau is likely ignorant of the history and social reality his policies in Haiti are entrenching, yet it’s unlikely he understood that blackening his face for a laugh at a party also flowed from and contributed to centuries of racial subjugation. It was just popular in the elite social circles he operated in. The same can be said of his humiliation of the impoverished black masses in Haiti today.