Trudeau lines Canada up behind Trump’s war drive against Iran 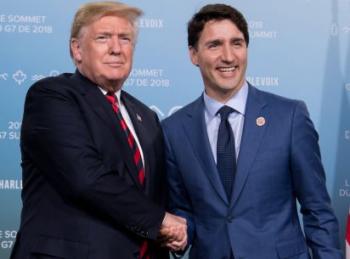 Canadian Prime Minister Justin Trudeau and his Liberal government have declared their unabashed solidarity with US imperialism in its campaign of aggression and war preparations against Iran. During a visit to the White House on Thursday, the same day US warplanes came within minutes of launching a devastating strike on the country of more than 80 million people, Trudeau painted Iran as the “aggressor.”

“Obviously, we’re very concerned about the escalation by Iran recently,” said Trudeau during a joint press conference with US President Donald Trump. “We have significant presence in the area, including leading on the NATO mission in Baghdad, in Iraq.”

Coming after thirteen months of escalating US provocations against Iran, beginning with Trump’s May 2018 unilateral abrogation of the 2015 Iran nuclear accord, Trudeau’s comments are absurd on their face.

In an action tantamount to war, Washington has imposed all-out economic sanctions on Iran, with the aim of freezing it out of the world financial system, blocking all its energy exports, and crashing its economy. To further its campaign of “maximum pressure” on Iran, Washington is arming Saudi Arabia and Israel to the teeth, and in recent weeks has deployed additional troops and weaponry to the region. These include an aircraft carrier battle group and a bomber strike force led by nuclear-capable B-52s.

Even as Trudeau was standing literally and figuratively with Trump in the criminal US campaign of aggression against Iran, American warplanes were, on the president’s orders, readying to attack Iran, which earlier Thursday had shot down an unmanned US surveillance drone that had penetrated Iranian airspace.

The attack-order would be rescinded only minutes before US bombs were to rain down on Iran, apparently because the Pentagon persuaded Trump that further political, diplomatic and above all military preparations are needed before launching all-out war with Iran.

Trudeau’s White House comments are an explicit declaration that when US imperialism decides to launch a military onslaught on Iran, Canadian imperialism will stand shoulder-to-shoulder with its “closest ally.” As the prime minister acknowledged, there are already substantial numbers of Canadian troops deployed to the region, including those leading the NATO mission in Baghdad to train Iraqi troops. Less well known is that a contingent of senior Canadian Armed Forces personnel has been deployed to the Middle East to assist the Pentagon with strategic planning and logistics.

Canada’s military and government are thus intimately familiar with the campaign of threats and military provocations American imperialism is mounting against Iran and its Syrian, and other allies—provocations that threaten to plunge the entire Middle East into a bloodbath.

Trudeau’s endorsement of the US war drive stands in stark contrast to the response of the European imperialist powers, which apart from Britain have distanced themselves from Trump’s war-mongering against Iran. In the latest example of this, both France and Germany have publicly challenged Washington’s entirely unsubstantiated claim that Iranian forces were responsible for attacking two oil tankers in the Strait of Hormuz earlier this month. Such criticisms are not motivated by any commitment to peace. Rather they are bound up with the fact that German and French imperialism view the US as a direct competitor for influence over the world’s most important oil-exporting region.

Until Trudeau’s White House remarks, Canada, for its part, had maintained a conspicuous silence on the Trump administration’s provocative actions against Iran. This is a case where one can safely say—silence denotes consent.

In pursuit of its own predatory interests and ambitions, Canadian imperialism has become ever more deeply allied with Washington’s drive to assert its unbridled hegemony over the Middle East. Canadian troops played a significant role in the neocolonial occupation of Afghanistan for a decade; joined the US-led bombardment of Libya in 2011; and have been operating in Iraq and Syria since US warplanes began their bloody air strikes in 2014, ostensibly to combat ISIS terrorists.

While the Canadian Special Forces deployed to Iraq were officially termed “advisers” to avoid triggering popular opposition, they effectively functioned on the front line of combat, including during the onslaught on the city of Mosul, in which thousands of civilians were killed by US bombs.

The Trudeau government has followed in its Conservative predecessor’s footsteps by integrating the Canadian Armed Forces (CAF) with the American war machine around the globe. In Eastern Europe, it has extended until 2022 the CAF deployment to Ukraine, where Canadian troops are training the Ukrainian army to, in Trudeau’s words, “liberate” Crimea from Russia. Canadian troops are also leading one of NATO’s four new “forward” deployed battalions along Russia’s Western border in Poland and the Baltic states.

In the Asia-Pacific, the CAF has maintained an information-and-logistics-sharing agreement with the US military since 2013, which has allowed Canada’s navy to be integrated into the US military build-up against China. Canadian warships have joined their US counterparts in provocative “freedom of navigation” exercises in the South China Sea and other nearby regions.

As Trudeau met Trump Thursday, Taiwan announced that a Canadian battleship and supply ship had passed through the Taiwan Strait in what it hailed as an anti-China “freedom of navigation” mission. Ottawa has thus far refrained from using that term to describe the navy’s actions in the Taiwan Strait. But their meaning was lost on no one. They form “part of the new Canadian position towards China,” Guy Saint-Jacques, a former Canadian ambassador to China, told the Globe and Mail.

Trudeau discussed China at length with Trump during his visit to the White House Thursday, and this was the topic which dominated the corporate media’s coverage of their meeting.

During their talks, Trump pledged to raise with Chinese President Xi Jinping the fate of Michael Kovrig and Michael Spavor, the two Canadians whom China has detained in retaliation for Ottawa’s effective kidnapping of Huawei Chief Financial Officer Meng Wanzhou. Canadian authorities seized Meng in Vancouver last December at the behest of the US, which has levelled trumped-up charges against her for allegedly violating US sanctions against business with Iran.

Meng’s arrest is part of an all-out US campaign to destroy Huawei and more broadly prevent China’s emergence as a rival in 5-G and other cutting edge technologies, so as to uphold US global dominance.

The day prior to his White House meeting with Trump, Trudeau signaled that his government stands behind Washington in its trade war with China. Again turning reality on its head, Trudeau painted China as the outlier threatening the “liberal” international economic order, and vowed that Ottawa will coordinate with Washington to confront Beijing at the G-20 meeting to be held in Japan later this month.

In fact, it is the US that is leading a global turn to protectionism and economic nationalism that is laying the groundwork for war, just as it did in the 1930s.

The fact that Washington and Ottawa’s anti-China alliance leads in the direction of military conflict was underscored by Trudeau’s announcement that the two allies are deepening their cooperation in securing access to rare earth metals. “One thing the President and I discussed during our meeting was the need to improve our collective mineral security,” Trudeau told Thursday’s press conference. “We agreed to … ensure future competitiveness of our mineral industries and the safety and security of our supply chains.”

In other words, Canada and the US are taking practical measures to prepare for a time when it will be impossible to depend on critical supplies of minerals from China, i.e. a collapse in trade ties or a war, either of which would prove disastrous for hundreds of millions of people across North America, in China, and around the world.