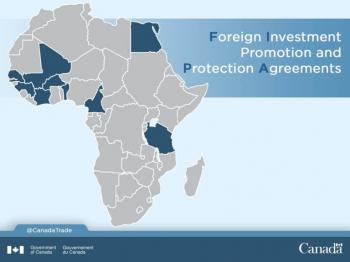 The Trudeau government, just like the Harper Conservatives, has used Canadian foreign policy to protect the profits of wealthy mining companies against ordinary Africans desire to benefit from resource extraction.

During a recent visit Justin Trudeau announced negotiations on a Foreign Investment Promotion and Protection Agreement (FIPA) with Ethiopia. FIPAs empower international investors by giving corporations the right to sue governments — in private, investor-friendly tribunals — for pursuing policies that interfere with their profit making. As such, they undermine governments’ ability to democratically determine economic and ecological policy. (Since few African companies invest in Canada there is little chance Ottawa will face a suit or feel domestic policy pressure as a result of a FIPA with an African country.)

The Liberals have signed FIPAs with Nigeria, Moldova and negotiated them with a half dozen more states. Following his participation in the November 2018 Africa Investment Forum, Parliamentary Secretary to the Minister of International Trade, Omar Alghabra, wrote: “To further help Canadian companies compete and succeed in this thriving region, the Canadian government has negotiated foreign investment promotion and protection agreements (FIPAs) with Benin, Burkina Faso, Cameroon, Ivory Coast, Guinea, Mali, Senegal and Tanzania. These agreements encourage increased bilateral investments between our countries by helping to reduce risk and by increasing investor confidence in our respective markets. We continue to advance FIPA negotiations with a number of other African countries.”

With African countries, FIPAs are overwhelming designed to protect mining companies. As an indication of how these bilateral investment treaties are driven by mining interests, the government has announced a number of them at the Prospectors and Developers Association of Canada (PDAC) conference in Toronto. In a March 2017 release titled “International Trade Minister promotes Canada’s mining sector at Prospectors and Developers Association of Canada convention”, Francois-Philippe Champagne “announced that the Canada-Mongolia Foreign Investment Promotion and Protection Agreement (FIPA) is now in force. This agreement provides substantial protections for Canadian investors in Mongolia, where there are already significant Canadian-owned mining assets.” At the 2014 PDAC conference the Harper government announced they were signing a FIPA with Cameroon and negotiating one with Kenya.

At a broader level the aim of a FIPA is to counter “resource nationalism”. Having benefited from 25 years of privatizations and loosened restrictions on foreign investment, mining companies fear a reversal of these policies. These concerns can be somewhat alleviated by gaining rights to sue a government if it expropriates a concession, changes investment rules or requires value added production take place in the country. Writing in Canadian Dimension Paula Butler notes: “Canada appears keen to negotiate FIPAs with some of the most economically and politically vulnerable but resource rich African countries before they develop a taste for resource sovereignty.”

The deputy head of Africa forecasting at political risk firm Exclusive Analysis, Robert Besseling, told the Toronto Star in 2013 that resource nationalism was Canadian miners’ top concern. The paper described “a trend toward what some call resource nationalism that’s seen a number of African governments — after opening doors to foreign investors — begin to reverse or revise regulations. Under pressure from civil society groups and labour unions, governments are driving a harder bargain or changing the rules of the game part way through.”

Any government that increases resource royalty rates or nationalizes extractive industries is a threat to Canadian mining interests. Yet, large numbers of Africans believe natural resources should be publicly held, or at minimum, heavily taxed. Some simply want minerals to remain underground. Ottawa’s “goal” in signing FIPAs with African countries, note Paula Butler and Evans Rubara, “is to prevent control of mining policy throughout the continent from falling into the hands of nationalist, pro- African, pro-community political forces who will promote a vigorous ‘resource nationalism’ agenda.”

Or, to put it even more bluntly, the Trudeau Government, like the Harper regime, defends the profits of a few wealthy owners of mining corporations over the economic and social interests of millions of Africans.