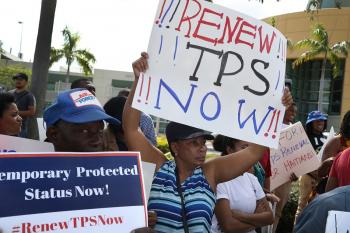 A demonstration for TPS extension for Haitians in the Boston area earlier this month.

On Nov. 20, the administration of President Donald Trump – who promised Haitians in Miami only 14 months ago to be their “greatest champion” – terminated Temporary Protected Status (TPS) for close to 60,000 Haitians who have enjoyed the protection since President Barack Obama granted it to them following the Jan. 12, 2010 earthquake.

Acting Secretary of the Department of Homeland Security (DHS) Elaine Duke tried to sweeten the bitter pill by giving the Haitians whom TPS allows to legally live and work in the U.S. 18 months to pack their bags and get out of the country.

“The decision to terminate TPS for Haiti was made after a review of the conditions upon which the country’s original designation were based and whether those extraordinary but temporary conditions prevented Haiti from adequately handling the return of their nationals, as required by statute,” read the DHS statement which announced the decision. “Based on all available information, including recommendations received as part of an inter-agency consultation process, Acting Secretary Duke determined that those extraordinary but temporary conditions caused by the 2010 earthquake no longer exist.”

But hundreds of local, state, and national elected officials, religious, labor, and community leaders, legal experts, newspaper and magazine editorial boards, and Haitian civil society organizations, including the Haitian government, disagree with Duke’s assessment and had deluged the DHS with letters, petitions, and appeals over the past few months, recommending that Haitians receive another 18-month extension of their TPS status.

Campaigning to be president, Trump visited Miami’s Little Haiti Cultural Center on Sep. 16, 2016 to meet with the Haitian community. “The truth is that Haiti is still suffering very badly, maybe as badly” as immediately after the 2010 earthquake, “after all of the tears, all of the money, all of the work,” Trump said on that occasion. Three weeks later, Hurricane Matthew devastated Haiti’s southern peninsula, throwing additional hundreds of thousands into hunger, homelessness, and economic ruin.

Today, many Haitians point to the irony of Trump’s final words in Miami 14 months ago: “I really want to be your greatest champion, and I will be your champion.”

The writing had been on the wall. Two weeks ago, the DHS had suspended TPS for 2,500 Nicaraguans who had enjoyed it since 1999. In an Oct. 31 letter, Secretary of State Rex Tillerson had recommended Duke terminate TPS for Haitians and Central Americans, including Nicaraguans, Hondurans, and Salvadorans. Immigrants from 10 nations are now covered by TPS. The coverage for Haitians and Nicaraguans will end in January. Nicaraguans received 14 months to leave the U.S. by Jan. 5, 2019; Haitians will have 18 months, until Jul. 22, 2019.

Furthermore, DHS had renewed Haitian TPS for only six months on May 22, 2017, presaging that it would be the last renewal. On May 9, the Associated Press revealed that the DHS was digging for evidence that Haitian TPS beneficiaries had committed crimes, in a clear attempt to find justification for the impending TPS cut-off.

Created by the 1990 Immigration Act, TPS is granted by the U.S. president (and renewed, usually for 18 months) to immigrants from nations destabilized by an armed conflict, environmental disaster, epidemic, or some other extraordinary and temporary condition. Since 1991, immigrants from 20 nations have received TPS, with close to 300,000 TPS beneficiaries now in the U.S..

“Haiti is a textbook case for an 18-month extension,” the Institute for Justice and Democracy in Haiti (IJDH) concluded in a Nov. 6 press release. “Hurricane Matthew in October 2016 – the worst hurricane to hit Haiti in 52 years – caused $2.8 billion in damages (22% of Haiti's GDP);... recovery from the 2010 earthquake is incomplete, with 40,000 still in Internally Displaced Persons (IDP) camps and 200,000 more in a camp, Canaan, simply renamed a ‘settlement.’ Secretary Tillerson’s State Department issued a Sep. 12 travel warning, noting that Embassy employees cannot even travel to two departments in Haiti’s southern peninsula because of security concerns lingering from Hurricane Matthew a year ago.”

On Nov. 20, phone lines and radio shows in New York, Boston, and southern Florida – where most Haitian expatriates live – buzzed with discussion of what response the Haitian community will give to the announcement in the streets. Rallies calling for TPS extension have seen reduced attendance in recent weeks because many Haitian immigrants were apprehensive of the aggressive anti-immigrant posture and tactics of the Trump administration. But with the announcement, and nothing to lose, some predict that major Haitian demonstrations – perhaps in conjunction with other Central American TPS immigrants – will be organized in the coming days.