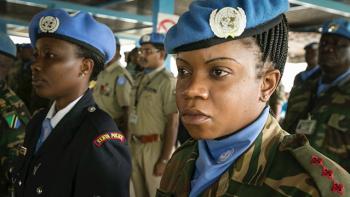 A UN Security Council (UNSC) resolution adopted on 31 October 2000, underlying the role of women in peacekeeping, has long been described as both historic and unprecedented.

But 17 years later, there are widespread expressions of disappointment over the mostly non- implementation of the resolution known by its symbol UNSCR 1325.

Mavic Cabrera Balleza, Chief Executive Officer/International Coordinator, Global Network of Women Peacebuilders, (GNWP) told IPS that despite all the ballyhoo following the resolution, the percentage of women in peacekeeping “is incredibly low”.

“This is beyond shocking. If we are going to use this as an indicator to assess the achievements of UNSCR 1325, we are failing miserably,” she declared.

Under-Secretary-General Phumzile Mlambo-Ngcuka, Executive Director of UN Women, told the Security Council last week although women’s absence from peace tables is no longer easily brushed off as normal, it is still commonplace.

“Every year, we track women’s overall participation in peace processes that are led by the UN. We track the inclusion of gender expertise and gender-sensitive provisions in peace agreements, and the requirement to consult with women’s civil society organizations. In all of these indicators, we performed slightly worse than a year ago.”

At the Myanmar Union Peace Conference in 2016—before the current crisis—there were seven women and 68 men among the delegates. And recent peace talks on the Central African Republic hosted by the Community of Sant’Egidio did not include a single woman.

Six years into the Syrian civil war—and in spite of significant efforts by the UN and the Special Envoy—women’s participation in the peace talks is still inadequate, and often limited to an advisory role. This political marginalization extends beyond peace talks, she declared.

Only 17 countries (out of 193 UN member states) have an elected woman Head of State or Government. This includes only one post-conflict conflict country, Liberia, where Ellen Johnson Sirleaf’s presidency has just ended after two terms, following democratic elections and the peaceful transfer of power.

“That is something to celebrate,” she added. Meanwhile, the proportion of women parliamentarians in conflict and post-conflict countries has stagnated at 16 per cent in the last two years.

Focusing on another neglected aspect, Sanam Naraghi Anderlini, co-founder of the International Civil Society Action Network (ICAN), told IPS there has to be some element of institutional or state responsibility for sexual exploitation and abuse (SEA) in UN peacekeeping missions.

She said it cannot just be “a soldier” — after all “a government” sent the soldier to the peacekeeping mission, so that government must bear responsibility for egregious behavior.

Second, “we have to be more honest about the ‘grayness’ of exploitation. Poverty and the need for food and water can induce ‘consent’ – so it can be abusive and exploitative but technically not illegal, if it involves an adult.”

Finally, for over 20 years we have heard the common refrain that “it is difficult to find women in militaries”. Why not have a radical re-think regarding the recruitment of women into peacekeeping forces?

It is not only about equal opportunities for jobs that pay better than others, but also about deep personal empowerment, and of course prevention of sexual exploitation and abuse.

“How do we do it?”, she asked. “Why not have regional women’s peacekeeping institutes where women can come and get the basic military training needed, as well as skills specific to peacekeeping?”.

There are plenty of countries that export women for domestic work, which entails poor pay and exposure to abuse. Why not support them to become peacekeepers? Their salaries would be higher and their skills could be useful once they return home, she argued.

Cabrera Balleza told IPS the benefits of having more women in peacekeeping are numerous and very tangible. Female peacekeepers serve as role models, they inspire women and girls to assert their rights and to take on leadership and non-traditional positions, including as part of the security sector.

“They are also more sensitive to the needs of female ex-combatants, women refugees, survivors of sexual and gender-based violence. No doubt, women peacekeeping personnel are critical to the success of peace operations”, she noted.

She also pointed out that it is easy to criticize the UN for this dismal failure to achieve gender parity in peace operations.

“However, we need to examine the source – and those are the (193) Member States. There are very few women in UN peacekeeping because the sources are shallow. Discriminatory recruitment and hiring polices as well as unsafe work environment within the Troop Contributing Countries (TCC) prevent women from joining police and military institutions”.

This, she said, is symptomatic of the major obstacles in implementing Resolution 1325– initiated by Ambassador Anwarul K. Chowdhury of Bangladesh when he presided over the Security Council in October 2000– and the supporting women-and-peace and security resolutions.”

The problems are multi-pronged: they are political, economic, social and cultural. Hence the solutions should also be multi-pronged and holistic.

The call for a holistic and coherent strategy to implement Resolution 1325 and the supporting resolutions is not new, she added.

The three reviews in 2015, namely the Global Study on UNSCR 1325; the High Level Peace Operations; the Peacebuilding Architecture Review all highlighted the need to address the fragmentation in the UN system in order for peacebuilding efforts to be successful.

Needless to say, the global policy decisions and the efforts to find coherence in the work of the UN should be informed by the voices of women in conflict affected communities and translated into localization initiatives.

“Let’s all roll up our sleeves, buckle down to work and take 1325 out of New York, and bring it to local communities. Only then can we fulfill the promise of this ground breaking international policy,” she declared.

In a recent article in Foreign Affairs, Naraghi Anderlini said when she started working in peacebuilding over 20 years ago, the United Nations was coming under fire because multinational forces working as peacekeepers in Cambodia had sexually abused women and girls and spread HIV/AIDS and other diseases among local populations.

In the many years since, UN peacekeepers have been accused of doing the same in the Democratic Republic of the Congo, Haiti, Liberia, and beyond. In 2014, peacekeepers from France and Georgia were implicated in incidents of sexual violence against young children in the Central African Republic.

In 2016, following investigations, the UN reported 41 cases of abuse involving peacekeepers from Burundi and Gabon, including eight paternity cases and six filed on behalf of minors.

With the arrival of Antonio Guterres as the new UN secretary general and Sweden’s presence in the Security Council in 2017, the issues have again gained traction, said Naraghi Anderlini.

As a champion of a “feminist foreign policy,” Sweden has made the Women, Peace, and Security agenda a priority at the UN, she noted.

As Guterres and the Swedish delegation noted, a better balance of women and men in peacekeeping forces would enable greater access to communities while increasing transparency and accountability among the forces themselves and reducing levels of sexual abuse.

“If this seems farfetched, it is worth imagining a scenario where UN peacekeepers are 100 percent female. Incidents of sexual exploitation and abuse likely would disappear altogether. Yet little effort has been put into increasing the number of women,” she declared.

Meanwhile, Sweden has been a staunch supporter of UN peacebuilding and assumed the chair of the Peacebuilding Commission in 2015 while maintaining a long tradition of participating in UN peace operations.

According to the Swedish government, more than 80,000 Swedish women and men have taken part in UN peacekeeping to date. From the very first group of Swedish military observers, who participated in the UN Truce Supervision Organisation (UNTSO) in 1948, to Sweden’s current engagement in the UN stabilisation mission in Mali (MINUSMA), Sweden’s commitment has remained firm.