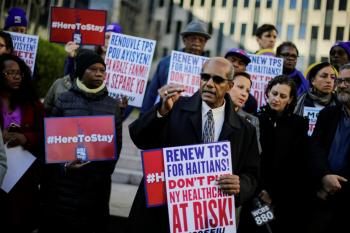 MAKE NO mistake about the meaning of the Trump administration’s decision Monday to expel nearly 60,000 Haitians who have lived legally in the United States since a massive earthquake devastated their homeland in 2010: The world’s richest and most powerful country is intentionally giving the Western Hemisphere’s poorest and most vulnerable nation a gratuitous kick in the rear end.

It is doing so despite the pleadings of the Haitian government and the assessment of experts, including those in the U.S. government, who portray Haiti and its supine economy as ill-equipped to absorb the wave of migrants that may be triggered by the administration’s move. It is doing so despite the additional calamities nature has visited upon Haiti since the earthquake — namely, a lethal cholera epidemic and, last year, a direct hit from a ferocious hurricane. It is doing so despite the fact that most of the Haitians are gainfully employed. And those facing removal have nearly 30,000 U.S.-born children — American citizens who will be separated either from their family or from the country of their birth and upbringing.

In announcing the decision, the Department of Homeland Security said it had decided to terminate the humanitarian program, known as Temporary Protected Status, because conditions in Haiti had improved. “Since the 2010 earthquake, the number of displaced people in Haiti has decreased by 97 percent,” the department said in a statement. It also said, “Significant steps have been taken to improve the stability and quality of life for Haitian citizens, and Haiti is able to safely receive traditional levels of returned citizens.”

That assertion is not just unsubstantiated; it is specious.

According to the World Bank, nearly a quarter of Haitians live on less than $1.23 per day, a level of extreme poverty rare in the Western Hemisphere; almost 60 percent live under the national poverty line of $2.41 per day. Unemployment is thought to be in the range of 40 percent. The agricultural sector, which accounts for more than a fifth of the economy and nearly 40 percent of its workers, is anemic. About half the country’s population is undernourished, and chronic malnutrition among children is widespread.

How can Haiti absorb the nearly 60,000 people who now have temporary protected status in the United States, to say nothing of their nearly 30,000 children? In short, it cannot. A country with few jobs and little opportunity, it suffers from chronic corruption and inept economic management. In the World Bank’s ease of doing business index, Haiti ranks 181st of 190 countries.

Under those circumstances, the administration’s decision to rescind the humanitarian status that allowed so many Haitians to live in the United States amounts to an act of cruelty. It is a beggar-thy-neighbor policy unworthy of a great power and unsuited to a nation with a tradition of compassion.